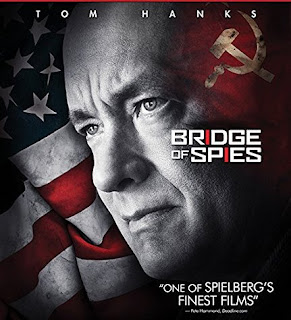 What do you get when Steve Spielberg directs a film from a screenplay written by the Coen Brothers?  .  It’s a period drama (Coens) starring Tom Hanks (Spielberg) and a bunch of lesser known actors (Coens), done on a lower budget than most mainstream studio releases (Coens) about a man who is principled and steadfast (Spielberg).  The result works pretty well.


The movie is based on true events, but there are a lot of liberties taken with the story.  Anyone who knows anything about the Cold War knows about Francis Gary Powers being shot down in his U-2 spy plane over the .  In that respect this movie may not hold a lot of suspense for folks.  Of course, if you don’t know history then what happens to him will be new to you.  What was new to me was the story of the other spy involved in things and the third man who became central to the outcome.

We first meet James B. Donovan (Tom Hanks) as a scumbag lawyer representing an insurance company that has denied claims against one of its customers.  We see that he can argue the most ridiculous concept (hitting five separate motorcyclists is only one accident so there should only be one claim against the company, not five) with a straight face.

We also see Soviet spy Rudolf Abel (Mark Rylance – Oscar nominated for Best Supporting Actor) going about his quiet life before the FBI arrest him.  It’s never explained in the movie what secrets he’s passing on to the Soviets, but we are shown that he is truly a spy.

Donovan is asked by his law firm to represent Abel to show that will give a valid defense even to its enemies.  Apparently they figure that if Donovan has no compunctions about representing evil insurance companies then he also won’t balk at representing a foreign spy.  He takes the case, but with the knowledge that he won’t be liked.

Abel turns out to be about as unemotional and taciturn as you can get.  Donovan explains to him that if they lose Abel could get the electric chair.  After getting no reaction, Donovan observes, “You don’t seem to be too concerned about that.” And Abel’s response is “Would it help?”  This type of exchange is repeated a few times during the film.

Despite the lip service about American justice Abel doesn’t remotely get a fair trial.  The judge denies all of Donovan’s requests for more time to prepare the defense, to declare evidence obtained illegally as being disallowed, and denying Donovan’s motions for a mistrial.  The one place Donovan is successful is in getting the judge to not sentence Abel to death, but instead 30 years in prison.

Donovan appeals eventually to the Supreme Court, going far beyond what his own law firm wanted him to do.  He becomes a pariah even among his peers, and his family comes under attack.

This is the first 75 minutes.  There have been a few scenes of Powers (Austin Stowell) training for his missions, but the last hour of the movie kicks off with Powers getting shot down.  He receives a ten year sentence from the Soviets.

Of course, the wants to get Powers back and the U.S.S.R. wants to get Abel back, but they can’t be seen to be openly exchanging spies.  The CIA approaches Donovan about brokering the deal to swap these two extremely high profile people.  As presented in the movie he’s an insurance lawyer who got an unusual criminal case, tried it anyway, and now out of nowhere is being asked to broker a deal between powerful enemy nations during the height of the Cold War, with no official sanction from the U.S. government.  And he in essence responds, “No problem”.

It comes across very incongruous.  I found out afterwards that in real life he had been the General Counsel for the – the precursor to the CIA – and that he was used to moving about in the world of spies and spy craft.

Donovan runs into issues in East Berlin (where the swap is supposed to occur) because the Berlin Wall has just gone up and an American student was grabbed by the German Democratic Republic (aka GDR aka ) for being a spy.  The Soviets want to exchange Powers for Abel, but the GDR wants to be a player on the world stage and so they want to swap this student for Abel, to then be able to hand him over to the Soviets.  Once Donovan learns about the student, he wants to get both Americans back, despite the CIA not caring in the slightest about the student.

Hanks does a decent job in the role, especially in being able to sell some of his character’s arguments that at first glance would seem outrageous.  The nominated Rylance does quite a good job in his role.  I don’t know if that’s how the real Abel was, but it works for this film.  In looking at Rylance’s resume on IMDB I have seen him in smallish roles in a couple of other films, but I didn’t remember him.  He’s more of a stage actor than a movie actor and he’s won three Tony Awards.

Other than Alan Alda in a small role as Donovan’s boss, and Amy Ryan as Donovan’s wife, there are not really any other familiar faces in the cast.  There is a bit of stunt casting, though.  Eve Hewson plays Donovan’s oldest daughter.  She’s an Irish actress who has been in a few films, but there is certainly no reason to go all the way to to cast a young actress to play an American daughter who has maybe 10 lines of dialogue in the movie.  So why did they?  She also happens to be the daughter of Bono.  Yes, as in the lead singer of U2.  So they cast Bono’s daughter for a movie involving the shooting down of the U-2 spy plane.

Overall, received six Oscar nominations, including Best Picture and Best Original Screenplay.  Spielberg did not receive a Best Director nomination, so that appears to limit the films chances to win Best Picture.  (Although it didn’t stop Argo a few years ago.)

I liked this movie more than I was expecting.  It is slightly slow in a couple places, but it didn’t feel like a more than 2 hour long movie.  I read that this is Spielberg’s lowest grossing film since (2005) – another movie about period global politics.  Obviously, if that subject holds no interest for you then you may want to skip this movie, but for everyone else I highly recommend it.