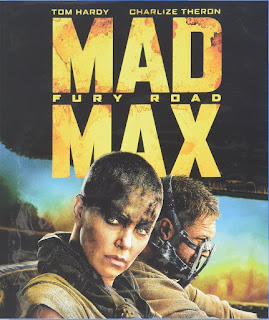 After a thirty year wait Max Rockatansky returns in Mad Max: …probably.  (More on that in a bit.)  This is a balls to the wall, completely insane action film and it blows my mind that it somehow got nominated for Best Picture.  Don’t get me wrong; I think it’s entertaining as hell.  It’s just that these kinds of movies pretty much never get Oscar nominations beyond ones for visual effects, sound, and editing.  Well, Mad Max: Fury Road (MMFR) received nominations for no less than ten Oscars, including one for director George Miller.


When it comes right down to it, MMFR is essentially one very long, very kinetic car chase.  Much like Gladiator (2000) was a remake of only one part of Spartacus (1960), so too is MMFR a remake of only one part of The Road Warrior (1981) – the ending chase with the tanker truck and cars.  Of course, being a remake doesn’t mean it’s a bad movie (Gladiator won the Oscar for Best Picture, after all).  As much as both critics and audiences have liked MMFR I just don’t see it winning Best Picture for itself, though.

In addition to essentially being a remake, this film is also sort of a reboot, but at the same time, it is also sort of a sequel.  Instead of Mel Gibson as Max this movie has Tom Hardy in the title role.  He is a younger Max than we saw in Mad Max Beyond Thunderdome (1985), and sharp eyed watchers have noticed that Max has a music box and jacket that he gave to the Feral Kid in The Road Warrior.  This has led some to speculate this movie takes place between the first and second films.

For others it has led to the theory that this is not Max, but the Feral Kid who is now grown up and who has modeled himself after his hero.  Bolstering this is that when the movie starts he is essentially feral and he hardly speaks the entire film (only 52 lines according to someone with too much time on their hands).  Weakening this theory is that this movie’s Max has flashbacks to his family being killed from the first film.  But then that raises a question because they don’t die in the same way they did in that film, which leads some people back around to the idea of this being a reboot.  Whatever it may be, it is right there with The Road Warrior as the best films in the series.

Also starring in the movie is Charlize Theron as Imperator Furiosa.  She works for Imorten Joe (Hugh Keays-Byrne), a dictator who controls a settlement with cult-like methods.  She drives a war rig that travels between this settlement and to bring back fuel.  It’s not long into the movie before she changes things up and heads due east, off road.  This is spotted by Imorten Joe’s men and the chase is on.

Joining in that chase is a sickly War Boy of Imorten Joe’s named Nux (Nicholas Hoult).  Max was being used as a “blood bag” to transfuse healthy blood into him.  Nux isn’t going to miss the chase, so he has Max strapped to the front of his car, transfusion line still connecting them.  Max is also wearing a chain and muzzle.  He gets the best and most dangerous view of the first major car chase.

Without spoiling how, Max and Nux end up getting more involved with Furiosa and her plans.  They involve trying to get revenge on Imorten Joe by stealing all of his wives.  The five of them are played by Rosie Huntington-Whiteley, Riley Keogh, Zoe Kravitz, Abbey Lee, and Courtney Eaton.  If I had one negative to mention with this film it’s that some of them are so obviously models in real life that they look hilariously out of place in this movie.  Yes, their characters would have been kept healthy and well fed, but they look like they just walked off a runway and in front of this movie’s cameras.  Huntington-Whiteley’ character, for instance, is several months pregnant, yet she is still thin as a rail everywhere except her belly.  She looks exactly like what she is – a six foot tall skinny model with a fake belly.  This is a minor complaint, though.

And the wives aren’t really that big in regards to onscreen impact.  In fact, I’d say after Max and Furiosa the third biggest stars in the movie are the vehicles.  Take the ones from the end chase in The Road Warrior, put them on steroids, trick them out with tons of found objects, and multiple them by three and you’ve got the vehicles in MMFR.  And let’s throw in a huge speaker covered truck with drummers and a guitarist (whose twelve string doubles as a flamethrower) to provide a live soundtrack for the chase.  If that last sentence didn’t make you A. smile; B. chuckle; or C. want to see it; then this may not be the movie for you.

And the stunts in the movie are certifiably batshit insane, especially the “Polecats” who ride flexible poles over the tops of moving vehicles.  Director Miller is proud that most of what we see onscreen are practical effects, not cgi.  (He’s fudging a bit – almost every frame of the movie has cgi in it; what he means is the crashes, explosions, and driving are all real).

Back in 1981 the movie An American Werewolf in came out and it was a quantum leap forward in regards to makeup and prosthetics.  It forced the notoriously resistant to change AMPAS to finally add a Best Makeup Category.  If ever there was a movie that was going to force them to finally add a Best Stunt Production category I would think it would have to be this one, but I’ve heard nary a word about that.

Hardy does a good job in the lead and Theron gets to play a strong female character that is just as much a survivor as he is.  We get only a small amount of her backstory in the movie and I was left wondering more about her.  She’s certainly got the beauty – might she have been one of Imorten Joe’s wives that was cast out in some way, perhaps being punished by having her arm removed, yet she still managed to fight her way back up to being an Imperator and war rig driver?

As I mentioned, MMFR was very popular with audiences and Tom Hardy has reportedly signed on for three more movies.  I do not think it will win Best Picture, but I can see it actually winning more Oscars than any other film this year.

Mad Max: is a very entertaining movie.  You don’t have to have seen the prior films to understand what is going on in this one, but do yourself a favor and check them out anyway.  Unless you hate any and all action movies, I highly recommend it.