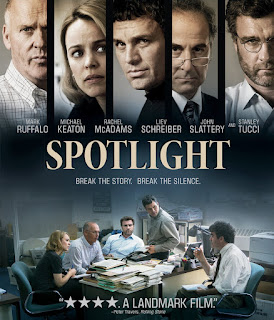 Spotlight is a film about the work Boston Globe journalists did to research and expose the vast scope of child molestation and cover-up that had occurred in the Boston-area Catholic churches.  The title of the film comes from the name of the team of journalists within the Globe who would get assigned months-long investigations of important stories.  This is a good film about a tough topic.  The best thing it does is treat the subject with the respect it deserves and not try to be sensationalistic with it, even though that has caused those who want more excitement and action to label the film “boring”.


It’s easy to forget now just how little the general public knew about these crimes back in 2001.  In fact, the Globe’s entire investigation started with a single priest who had been accused of molesting a child many years before.  As they dug deeper the story just kept expanding.  The obvious parallel here in regards to films is All the President’s Men (1976) about the Washington Post reporters revealing the Watergate scandal.

Most of the real reporters were on set for a lot of the filming, answering questions for the actors and just interacting with them so the performers could take in their mannerisms and speech patterns.  Robinson, in particular, lauded Keaton for being so much like him that it was scary.  Robinson also said that seeing Keaton performing as him made him want to apologize to some of the people he had interviewed.

In the film the Spotlight team has just completed a large investigation and story and is ready to start a new one.  One of the options is a story on a priest accused of child molestation.  The accuser isn’t the most reputable kind of witness, though, and this is the we’re talking about.  is heavily Catholic, especially Irish Catholic, so this was a (literally) sacred cow you did not kick.  As it turns out, most of the Spotlight team was Catholic.

Editor Ben Bradlee, Jr. (John Slattery) – yes the son of Ben Bradlee of the Washington Post Watergate fame – is not keen on the priest story.  But the Globe has just been bought by new owners and they bring in a new person to be Editor-in-Chief.  He is Marty Baron (Liev Schreiber), not just an outsider to (much of the staff is born and raised in the area), but he’s from and is Jewish.  When he says to pursue the priest story there is some wondering if he’s a “vindictive Jew” out to use the paper to cause trouble for the Catholic Church.

When they do start to look into the priest they start to find there are already other lawsuits either in progress, or that have been settled by the Catholic Church.  There is no public record of the latter, though.  They try to talk to lawyers involved, but none of them will cooperate.  Even a lawyer (Stanley Tucci) defending a victim who refused to settle doesn’t want to get involved in the Boston Globe story.  And at least one victim is pissed at the Globe because he says he sent them evidence years earlier and they did nothing with it.

It takes a lot of work by the Spotlight team to individually pursue their leads and get people to start talking to them.  When they begin to realize just how large the victimization and cover up might be, they are horrified.

The Catholic Church quickly becomes aware of their investigation, of course, and uses both persuasion and veiled threats to try to get them to stop.  They get out and out threats from other people who consider the Catholic Church to be inviolate and who resent anyone trying to “harm” it.

Spotlight received six Oscar nominations, including Best Picture, Director, and Original Screenplay.  Ruffalo and McAdams also received nominations in the Supporting Actor and Actress categories, giving this film a “mini-five” set of nominations.  (Actor and Actress are the missing ones for getting nominated in all five major categories.)

Director and co-writer Tom McCarthy is a man who was a character actor for many years before finally starting to do his own small films.  His first writing/directing effort was The Station Agent (2003), a terrific movie that introduced the world to the talented Peter Dinklage.  Next for McCarthy was The Visitor (2007) which earned fellow character actor Richard Jenkins a well-deserved Best Actor Oscar nomination.  (Jenkins also has an uncredited phone voice cameo in Spotlight as an expert on the psychology of pedophile priests.)  McCarthy’s 2011 film Win Win received many nominations for his screenplay.  McCarthy also was involved in writing the Pixar film Up.

In short, Spotlight is simply a continuation of the fine work McCarthy has been doing behind the camera and I think it’s great that he’s finally getting more widespread recognition.  It’s certainly not an edge of your seat kind of thriller, but it is a mature, thoughtful story about one of the most horrific things the Catholic Church has ever done to people.  It is a story that everyone should know more about.  I highly recommend you see this film.