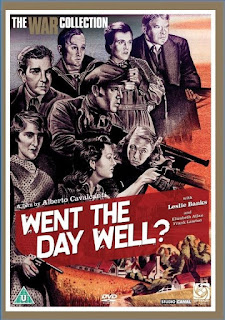 Steve Honeywell at 1001plus and I agreed to continue to do a monthly review of a film the other picked for us.  We did 12 in 2015 and we will do 12 more in 2016.  The first one I chose from Steve’s list for me this year is a British war film from 1942.  It’s also on the list of the 101 War Movies You Must See Before You Die, and I am slowly working on those entries, so it seemed like a good place to start.

I called this a “war film” and it is to a certain extent, but it’s more accurate to call it either a thriller or a war propaganda piece.  The events do not take place on a battlefield, but rather in a small village in that gets infiltrated by Nazis in preparation for a full-scale invasion.  The Nazis have disguised themselves as British soldiers that are in the village to inspect its readiness for home defense and to conduct some training.  For the most part they speak perfect English and have all the mannerisms down.

There is also a Nazi sympathizer among the villagers who is coordinating with them.  This adds another element of suspense as he is among the townsfolk when they are talking about their plans to try to escape or fight back once the plot is exposed.

I mentioned this is a propaganda piece.  It was made in 1942 when there was a constant concern that the Germans were going to invade .  Everyone was supposed to remain vigilant and always keep an eye out for enemy infiltrators.  This movie shows a couple of small things that the villagers first shrug off, but later come to learn were signs of Germans (i.e. how the number 7 is written).  It reminded me of the scene in Tarantino’s Inglorious Basterds where the way an American masquerading as a German orders three beers, but holds up the wrong fingers.

Once the plot in Went the Day Well is exposed the Nazis round up the villagers, but there are going to be certain visitors coming in from out of town (i.e. a paperboy), so the villagers are released to their homes, but each has a soldier with them.  They have to appear normal, but still somehow try to get word out.  Several attempts fail, and not everyone makes it through alive.  It is perhaps more shocking to see a little old village lady we’ve come to know die than a young soldier on a battlefield in a conventional war film.

Because everything was revealed to the viewer right up front, even the traitor among the villagers, I kept waiting for another twist of some sort to happen.  In fact, I had pegged a second villager as another sympathizer that had not been revealed to us yet because her actions were, in my mind, questionable.  As it turns out I was wrong and I was simply reading too much into things.

One other note on the story – the opening introduction refers to this as a real event that “you will have all heard of”, but they ran the usual disclaimer at the end that all events and people were fictitious.  The other thing from the introduction that threw me a little was the person referring to Hitler being defeated.  I paused and checked IMDB to confirm this was a 1942 film.  The opening and closing are apparently supposed to be happening post-war and we are then seeing an incident that occurred “back in 1942.”

The movie is based on the short story The Lieutenant Died Last by Grahame Greene.  The movie’s title comes from part of a WWI epitaph written by John Maxwell Edmonds and it appears in the opening.

I didn’t recognize any of the actors or actresses in the film, and there were at least a couple dozen folks with parts.  Leslie Banks is top billed, if that name is familiar to you.

The movie acknowledges the help from one of ’s military regiments in the making of it.  I couldn’t help but remember a scene from a modern British film set during WWII where people in come upon a film crew making a war movie and exclaim over the waste of time and money it was when those men and material could be fighting Hitler instead.

Overall this is a good movie, which while a piece of propaganda, still functions as a tense in places thriller.  It can be a little hard to find, from what I’ve read in the IMDB comments, but Turner Classic Movies shows it from time to time.  If I gave half star ratings this would be 3.5 stars.  I definitely recommend the movie if it sounds interesting to you.