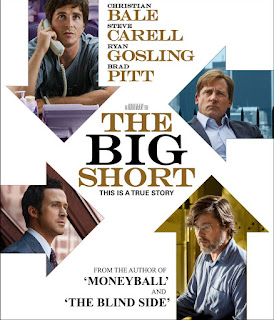 As I write this The Big Short just became the unexpected winner of the Producers Guild Award for Best Picture.  Since the PGA winner has presaged the Oscar’s Best Picture winner for seven years straight, and since The Big Short was not considered the Oscar front-runner, this has thrown the Oscar race a big curve.  Making it even more unsettled is that if The Big Short were to win it would be the most comedic film to do so since at least American Beauty (1999).


Unlike The Martian, which the Golden Globes put in the comedy category despite being a drama with occasionally humorous moments, The Big Short is an out an out comedy with a few dramatic moments regarding the impact of the financial downturn it covers.

The humor in The Big Short is more the “dark humor” kind because the subject of the film is the collapse of the housing and financial markets in 2007.  We see it from the perspective of a few individuals who predicted that the always rock solid, never had a problem mortgage market was completely out of control and was ready for an implosion.

The first person to figure it out was Dr. Michael Burry (Christian Bale – who received a Best Supporting Actor nomination), a metal listening, t-shirt wearing, actual for real medical doctor, who managed a mega-billions money fund in California.  He “shorts” (bets the mortgage market will go down) to the tune of over a billion dollars of fund money.  His bosses think he is nuts.  For reasons unknown to me, Dr. Burry is pretty much the only person whose real name is used.

While Burry is getting banks to accept his money for shorting the mortgage market trader Jared Vennett (Ryan Gosling) gets wind of it.  His character also functions as the occasional narrator of the film.  Vennett can’t get anyone to go in on the same kind of short with him until a smaller, semi-independent firm within one of the larger ones finally bites.  That firm is run by Mark Baum (Steve Carell), an abrasive, not-a-people-person kind of guy.

Baum won’t buy in until he’s had a chance to look into the mortgage market himself and what he finds he sums up as “everyone is an idiot”, giving out mortgage loans to people not remotely qualified to receive them.

Also getting wind of this are two smalltime traders literally running an “investment firm” out of their garage.  They are very proud of the fact that they have turned $100,000 into 30 million dollars and want to buy their way into direct trading.  They are given a reality check when they are told that they are “one billion, four hundred and seventy million dollars” away from the minimum 1.5 billion dollar threshold needed to get that license.  They then enlist the help of former Wall Street bigwig Ben Rickert (Brad Pitt, who produced the movie).

There are a number of other familiar faces in smaller roles from Marisa Tomei to Melissa Leo to a handful of celebrities cameoing as themselves.  The latter are among the highlights of the film.  There are a number of financial terms used in the movie, and the screenwriters knew that they had to make it so the average person could understand them, so they turned each one into a comedic, yet still informative, section with “a real celebrity” explaining the concepts.  “And now, here is Margot Robbie in a bubble bath to explain shorts.” The movie also has fun with the concept that the average person will only pay attention to important matters if someone famous and/or good looking is saying it.  Chef Anthony Bourdain and entertainer Selena Gomez also cameo explaining financial topics.

The result of all of this is that it’s actually pretty easy to follow what is going on, why a particular financial event is good or bad for the protagonists, and how the banks try to cover up the collapse.  Don’t avoid this movie thinking you have to be an expert in investing to understand it.

The Big Short received five Oscar nominations, including Best Picture, Director, and Adapted Screenplay.  It is based on the book by Michael Lewis (whose earlier book Moneyball Brad Pitt also produced a movie version of).

Director and co-adapter Adam McKay may be one of the least likely multiple Oscar nominees of all time.  He’s best known for doing a series of movies where Will Ferrell plays an idiot.  I know that doesn’t narrow it down much, so do the names Anchorman, Talladega Nights, Step Brothers, and The Other Guys ring a bell?  And just to show what really drives studios they would not give McKay the go ahead to make possible Best Picture winner The Big Short until he agreed to do an Anchorman sequel for them first.

Don’t worry about The Big Short, though; the protagonists are all smart, very smart, in fact.  It’s the banking industry that are morons.  Don’t think of this as an Anchorman kind of movie, because it’s not.  Think of it more as a funny version of Margin Call (2011).  It’s definitely one of the more entertaining Best Picture nominees this year.  If I gave half star ratings this would be 3.5 stars.  I definitely recommend you give it a try.