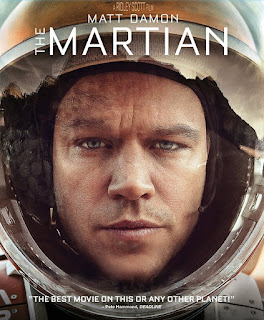 I have seen five of the eight Oscar nominees for Best Picture so far and among them The Martian is my favorite.  It combines the best aspects of Apollo 13, Castaway, and Gravity.  And I’ll address this right up front – despite the Golden Globe wins for the film and star Matt Damon in the comedy categories, this is a drama with some lightly humorous moments, not a comedy.  It’s also a great story.

I like movies where smart people deal with issues by being smart, or to paraphrase a line from the film - by sciencing the shit out of it. We have far, far too many movies about idiots being idiotic, so it's nice when every once in a great while a film like this gets made.  This is easily Director Ridley Scott's best movie in quite some time.  Drew Goddard (who got his start with Joss Whedon writing Buffy the Vampire Slayer) delivered a great script, too.  It’s all based on a book that started out as free, serialized posts on the blog of writer Andy Weir.  He got so many requests to turn it into an e-book that he finally did and was selling it for 99 cents.  It attracted ’s attention and the result was this film.


The movie opens with a manned mission already on Mars.  Storms threaten the return ship and the order is given to do an emergency evacuation of the planet just as the storm comes down hard.  Astronaut Mark Watney (Matt Damon) is hit by debris and his life signs flatline.  It’s impossible to find his body in the storm, and any further delay jeopardizes everyone’s lives so Commander Lewis (Jessica Chastain) orders the ship to launch and head back to Earth.  This all occurs in the first ten minutes.

Of course, Watney is still alive or there wouldn’t be much of a movie.  His biggest problem, and he’s got many, is he doesn’t have enough food to survive the four years that will elapse before the next manned mission to Mars.  He has to figure out how to grow food in dead Martian soil.  He is recording everything he does on cameras there for whoever eventually finds the site again, so he holds up a botany manual with his name as the author on it, and says, “Luckily, I’m a botanist”.

The movie continues with Watney speaking to the camera, explaining what he is doing.  So even though he is talking a lot, it never feels like boring exposition, nor does it feel unnatural.  I learned that you can actually make water, and afterwards I had an “of course” reaction.  It’s simple chemistry, just dangerous to do.

The book’s writer Weir used his serialized approach to present Watney with an issue and then proceed to write about how he overcomes it, or at least tries to.  As the character says, he’s going to have to “science the shit out it.”

In case you are wondering, the communications array was destroyed during the storm so he has no way of informing anyone that he is still alive.  However, a NASA worker examining satellite pictures of the abandoned site notices that objects seem to be moving.  From that they figure out that Watney is still alive, but they have no way to let him know they know.  They also withhold this information from the other astronauts who are on their months long journey back to Earth since NASA feels they would be so distraught over leaving Watney behind it could jeopardize their return.

There are many familiar faces in the cast with Jeff Daniels as the head of NASA, Sean Bean as the Mission Control Flight Director, Kristen Wiig as the NASA publicist, Chiwetel Ejiofor as the Director of Mars Missions, Benedict Wong as the head of JPL, and Michael Pena, Kate Mara, Sebastian Stan, and Aksel Hennie as the other astronauts who left Mars.

The science is mostly accurate in this film, with the biggest exception being the storm that precipitated the entire crisis.  Mars’ atmosphere is so light that even though it does have dust storms they would not remotely approach the damaging strength shown in the film.

Your ability to predict how Watney might receive help may depend on how much science you know, or how much science fiction you have read.  As I was watching the movie I kept thinking, “Why don’t they do X” and that is what was finally tried.  In addition, if you’ve seen enough films you get a sense for how certain people getting cast impacts their screen time, so that also might give away the ending for you.

Figuring out what was going to happen didn’t affect my enjoyment of the film in the slightest.  In fact, it gave me something to look forward to since I wanted to see it happen.

Damon does a great job at playing the character.  He is both matter of fact on his grim situation, and occasionally funny in a gallows humor sort of way.  A running joke is how the other crew had to leave most everything behind when they abandoned the site, and that includes Commander Lewis' extensive collection of disco music, which Watney just hates.  But there’s nothing else to listen to, so he plays it in spite of that.  The joke is capped off by the song that plays as the cast credits start to roll.

There are also a couple of quick meta references with a scene (that includes Sean Bean’s character) discussing the Council of Elrond from The Lord of the Rings, as well as a separate reference to the famous “In space no one can hear you scream” tagline from Ridley Scott’s own film Alien.

The Martian is a smart movie with a terrific script.  It is well-acted and has real emotion in it.  It’s an all-around winner as far as I’m concerned.  I watched it for a second time last night and it not only held up; it was even better.  This is a must see for everyone, even if it sounds like something you might not like.