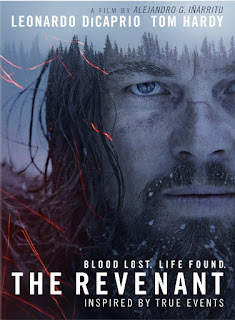 As I write this The Revenant appears to be the emerging favorite to win Best Picture at the 2016 Oscars.  That is still more than a month away, though, so we will have to see if it keeps its momentum or if it starts to fade.  It is a simple tale of survival and revenge very loosely based on the story of Hugh Glass, a frontiersman in the 1820s who was attacked by a bear, left for dead, but managed to make his way back to a fort.  It stars Leonardo DiCaprio in what might finally be an Oscar winning performance for him.  It’s got a lot of good things going for it, but The Revenant also has some flaws.


First things first, this is an absolutely beautiful film to see.  It should easily walk away with the Oscar for Cinematography.  And they shot almost the entire film using only natural light, which limited them to only a few hours a day.  This caused problems because they went so far over schedule shooting in (80 days ballooned to 9 months) that all the snow melted and they had to relocate to southern to complete the film.  It was also shot chronologically.  All of these things caused the budget to more than double during the shooting.

Hugh Glass (DiCaprio) is a frontiersman hired to accompany a group of trappers in 1823 in what is now in the   He knew the land because he had married a Pawnee woman and they had had a son together.  His wife had been killed, but his now teenage son is still with him on this expedition.  At the opening of the film this expedition is attacked by a tribe of Arikaras.  Only a few men get away, and with only a fraction of the pelts they had collected.

While heading down a river Glass warns that the Arikara will be waiting to ambush them and that they have to leave the river and travel overland if they want to survive.  Captain Andrew Henry (Domhnall Gleeson), the leader of the expedition, agrees with him despite the strong protests of one of the men, John Fitzgerald (Tom Hardy).  To travel overland they will have to leave even more of the pelts behind, meaning months of work is going to earn them almost no pay.  Fitzgerald targets Glass as the cause of all his problems.  He probably already had an issue with Glass because there is a story that Glass might have killed a white man while he (Glass) was living with his Pawnee wife and child.

While traveling overland Glass is attacked by a grizzly bear.  It’s a triumph of practical and cgi effects because DiCaprio and the bear were never together.  It’s a stunning scene to watch.  Glass manages to kill the bear, but is too wounded to move.  The other men find him and try to tend to his wounds, but they figure he’s only got hours to live.  A few days later he’s still hanging on, though, unable to move or speak.  Captain Henry orders the men to carry him, but they have to travel over steep mountains and it’s just not practical.

They still all figure Glass will die, but the Captain orders that he get a proper burial.  Glass’ son Hawk (Forrest Goodluck) stays with him, as does a young man named Bridger (Will Poulter).  Captain Henry asks for one more volunteer, and after Hawk and Bridger offer up their shares of the money Fitzgerald offers to stay, too.
Fitzgerald obviously has no intention of doing much for Glass other than kill him, but the Captain takes the coward’s way out and pretends not to know.  Fitzgerald does try to smother Glass but Hawk stops him.  Fitzgerald kills Hawk and covers it up when Bridger returns.  Fitzgerald then makes up a story about a large group of Indians nearby and that they have to abandon Glass to get to safety.  Fitzgerald and Bridger lie when they catch up to Captain Henry and say that Glass died from his wounds and that they gave him a proper burial.  Again, the Captain pretends to believe them.

In the meantime, Glass does not die.  He slowly forces himself to move, hide from unfriendly Indians and French trappers, get food, a horse (which he rides off a cliff, as seen in the trailer), and generally be the manliest man you may have ever seen.  The movie then spends a considerably amount of time alone with him as Glass makes his way across cinematically beautiful landscape.  When Glass finally makes his way back to the fort where Captain Henry, Fitzgerald, and Bridger are at things come to a head.  DiCaprio does a great job in the role, much of which is silent expressions since he is either too injured to speak, or he is alone.  Hardy has also received praise for his work in the movie.

The film takes a lot of liberties with both the story and what life is like in winter.  In reality Glass never had a son, he wasn’t the enemy of the French, there was no specific Arikara attack, he didn’t seek revenge for being left behind, and the bear attack and abandonment took place in warm weather in August in relatively flat territory – hardly the frigid, rugged, snow covered mountains shown in the film.

The movie also assumes that hypothermia does not exist.  There are many scenes where men and horses go into water that would be not much above freezing and they simply get out and continue on.  In one scene Glass shrugs off his outer clothing (the bear pelt) and he’s fine.  None of the men ever seem to have a problem with their gunpowder being wet from being in the water.  (They still used muskets at this time.) These are artistic leaps done because running water is a lot more interesting cinematically.

And it’s the “pretty images above all” philosophy that is the biggest flaw in this movie.  Much like a Terence Malick film, for the first hour or so you just sit in awe of the imagery, but eventually you become a little immune to it, and you realize that you’re more than an hour into the movie and not a whole lot of story has actually happened.  And then you further realize that there’s more than another hour and a half to go like this.  (It’s a 2 hour, 36 minute long movie.)  As it kept dragging on and on my enjoyment of the film kept dropping.  The story could have (and has) fit easily into an hour long episode of any western TV show.

Director Innaritu has a chance to go back to back at the Oscars since his movie Birdman won last year.  (And cinematographer Lubezki very likely will go back to back to back with Gravity, Birdman, and this film.)  Birdman, however, had multiple stories in it and was just under two hours long.  The Revenant is 40 minutes longer and with about one third the story of Birdman.

If you’re the kind of person who isn’t concerned with story or plot, and who loves beautiful images, then this is absolutely the film for you.  If you’re like me and expect something more from your top films, including that they have a fully developed story in them, then you may find this lacking.  I still recommend it, and if I gave half star ratings this would get 3.5 stars.  Just don’t expect the greatest movie ever made.