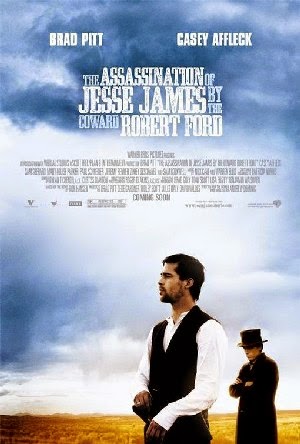 I had heard good things about the film The Assassination of Jesse James by the Coward Robert Ford, but I had never happened to get around to seeing it.  When Steve Honeywell at 1001plus put it on his list of 12 films for me to watch and review this year I was glad.  I wasn’t sure what film I would do first.  This one was certainly a front-runner based on my history with it, and also based on the fact that it was one of only three films on the 2014 Empire Top 301 Movies of all time list that I had not yet seen.  What finally cemented it were comments from a couple of fans both on my last post and on a Letterboxd list I created to go along with this.


For anyone who doesn’t know the name Jesse James he was a murderer and thief whose crimes mostly occurred in the post-Civil War period in the central part of the .  In his own lifetime he became a romanticized figure, thanks to dime novels and magazine serials that made up stories of his adventures.  He was eventually killed by Robert Ford (hence the title).

One of the strengths of this movie is that it sure isn’t Butch Cassidy and the Sundance Kid in regards to romanticizing the criminals.  In addition to being a murderer and a thief, this movie clearly presents James (Brad Pitt) as an out and out asshole who terrorizes pretty much everybody around him…when he’s not belittling them.  A few scenes with his wife and children are shown to keep him from being a caricature, though.

Instead, the movie allows the people within it to romanticize the larger than life character from the dime novels.  Chief among them is Robert Ford (Casey Affleck).  He convinces his brother Charley (Sam Rockwell) to join Jesse and his brother Frank James (cameo by Sam Shepard) in a train heist.

After the heist everyone goes their separate ways and the movie spends a couple of hours on various events that happen in their lives.  In fact, this is more an ensemble movie than a Brad Pitt movie.  A number of familiar faces, such as Jeremy Renner, Mary-Louise Parker, Garret Dillahunt, Paul Schneider, Alison Elliot, Michael Parks, James Carville, , and Zooey Deschanel appear.

For me, the two best parts of the film were the opening 20 minutes and the closing 20 minutes.  The opening features a train heist that is beautifully shot in the darkness with the train’s lights coming through the trees.  And the final 20 minutes are what happens after Ford kills James.  I was glad that the movie didn’t end just because Brad Pitt wasn’t onscreen anymore.  In fact, it was this final 20 minutes or so that sold me on the movie.

This leads me to my one negative with the film – the pace.  This is a slow-moving, although periodically poetic, film presentation.  It sometimes takes people 3 minutes to exchange a couple of sentences while they stare at each other.  More than once I caught myself doing a time check on how far along I was in the movie.  We spend a great deal of time with minor supporting characters.  Although they are amusing, did we really need ten minutes of the sexual adventures of Jesse James’ cousin’s father’s second wife?

I feel that 30 minutes could easily be taken out of this movie to tighten it up.  There is narration throughout the film.  I found out afterwards that the narrator (Hugh Ross) was an editor on the movie.  I’m tempted to joke that maybe he should have spent a little more time editing and a little less time narrating.

I also found out afterwards that the studio and adapter/director Andrew Dominik were at odds regarding the pace of the film.  They wanted one with more box office appeal, while he wanted to stay true to the original 1983 Ron Hansen novel of the same name.  His first cut of the film was actually four hours long.  He got it down to the existing 2 hours 40 minutes, but the studio wanted it even tighter.  Although Dominik did not have final cut, Brad Pitt was also a producer on the film and he backed Dominik.  The studio acquiesced, and after twice delaying the release, finally put it in theaters.

Unfortunately, it did poorly at the box office.  Despite having Pitt to draw people in it grossed less than 4 million dollars in its entire four month domestic run.  To be fair, though, it was released in the month of September where studios send movies to die.  Other September releases around this time included Serenity (2005), A History of Violence (2005), Lord of War (2005), and Eastern Promises (2007) – all films that “underperformed” at the box office, but also ones that are well worth your time.

On the critical side of things, this film received two Oscar nominations.  One was for Roger Deakins’ cinematography and the other was for Casey Affleck as Supporting Actor.  You could easily argue that he was just as much the star of this film as Brad Pitt was.  The “supporting” tag was perhaps done because he had a chance to also receive a nomination as Best Actor for another film that same year – Gone Baby Gone (his brother Ben Affleck’s directorial debut.)  As it turns out, Javier Bardem won Best Supporting Actor for No Country for Old Men, and Daniel Day-Lewis won Best Actor for There Will Be Blood, so as good as Casey Affleck was in both films, he didn’t stand a chance of winning against those two.

And make no bones about it, Affleck is quite good in this movie.  He plays an awkward, hero-worshipping fan of James to start, and then over the course of the film becomes more and more disenchanted with him, especially when there’s a real possibility that James is going to kill him.

Overall, The Assassination of Jesse James by the Coward Robert Ford is a very well made film.  It certainly moves at a slow pace, so if you are looking for an adrenaline fix then you should look elsewhere.  But if you stick with it you get good performances and a film that knows the importance of finishing the story, even if the biggest star is no longer onscreen.  If this sounds interesting then I recommend you give this film a try.