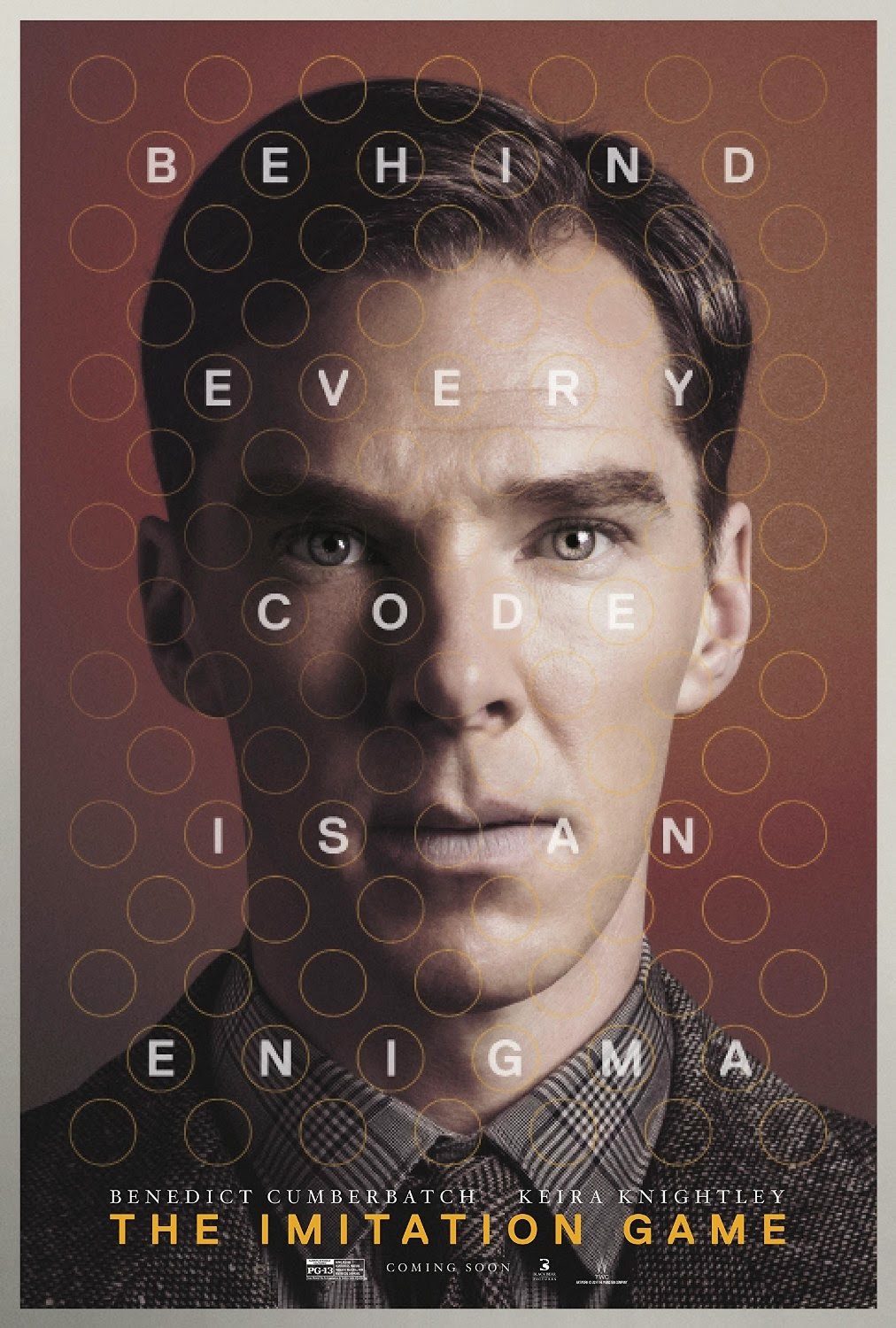 I was at a bit of a loss on how to review The Imitation Game.  It’s the story of three points in Alan Turing’s life – as a teenager in the late 1920s, as a code breaker during WWII, and as a lone man in the early 1950s.  I was very familiar with Alan Turing’s life since he is one of the key pioneers in the field of computers.  Anyone who works in the computer field, or at least anyone who got a degree in the field, should have no surprises from this film.  The problem is that, as presented, the movie keeps a key secret about Turing until more than halfway through the film.  It’s played as a mystery that is hinted at a few times.  And the consequences to Turing when that secret came out were also well-known to me.  They make up a key part of the ending.

The problem is, some people will never have even heard of Alan Turing, and all the events in this film will be new to them.  Most any review for this movie will spoil it for them, since the filmmakers and actors themselves are talking quite openly about what is revealed.  It’s as if they have decided most everyone already knows the story, too.

I finally decided that I will mark a couple of spoiler sections in this post, with labels as to who they will be spoilers for.  I will still have a regular review for those who just want to get a sense of what the film is about and if they might want to see it.


During WWII the Germans had what was known as the Enigma Machine.  It would translate messages into code and they could only be read by someone else with another Enigma Machine AND the code key.  The British have secretly acquired a machine, but the code key changes every single day at Midnight.  The machine produces 159 million million million code combinations.  The result is that Enigma is essentially unbreakable.

The government sets up a code breaking team comprised of linguists, a chess champion, and mathematicians to try to do the impossible.  Entering into this mix is a man in his late 20s named Alan Turing (Benedict Cumberbatch).  He is obviously brilliant.  He is also obviously not a team player.  He clashes with both Naval Commander Denniston (Charles Dance), who is the head of the program, and Peter Hilton (Matthew Goode), the leader of the team.  With the help of the head of MI-6 (Mark Strong) it’s not long before Turing is leading the team.  Instead of trying to break each day’s code he concentrates on building a machine that will be able to break any code.

While not a true computer (because it could not be reprogrammed to do anything other than break codes) it was nevertheless a key step towards the concept.  Turing brings in a couple of new team members, one of whom is a woman.  Joan Clarke (Keira Knightley) is not a figment of the screenwriter’s imagination or a token casting for the female audience.  She was a real person with degrees in mathematics who was with Turing during the key development of his code breaking machine.

Some people, perhaps understandably, have confused this movie as being only about the breaking of the German Enigma machine.  They correctly point out that the Poles and the Americans also had key roles in this endeavor – the Poles before the British, and the Americans after the Germans made a new, more complex, Enigma Machine.  I don’t have a problem with those events being left out because that’s not the story this movie is telling.  It’s about Alan Turing as a person, not just the role he played in WWII.

There are two other sections of his life shown in the movie.  While WWII does get the bulk of the screen time we also periodically see Turing as a teenage boy in school and as a college professor in post-WWII .  It is the latter section where Turing’s secret is discovered.

The local Bobbies investigate a break-in at Turing’s home in the early 1950s.  When they arrive he is uncooperative.  He tells them nothing is missing, and although there is obvious vandalism, he tells them he doesn’t want to pursue it.  He just wants them to close the case.  This makes one of them very suspicious.  It’s known that Turing worked for the government during the war, but when the detective tries to get Turing’s war record he’s told that it is classified.  He suspects something is being hidden there, too, and starts to seriously worry about Turing maybe being a spy for the Communists. (The “Red Scare” wasn’t just an American phenomenon).  He keeps digging and his actions eventually result in the revelation that Turing is gay.  We now know that the scenes of Turing in school have not just been showing us how he got interested in ciphers, but also how he was falling in love for the first time.

It was illegal to be gay at that time in .  Despite all that Turing did to help win the war, his own government ordered him to be chemically castrated because of his homosexuality.

This “justice” that is meted out to Turing pretty much destroys his life.  Even though the chemicals would stop being administered after a couple of years, he ended up committing suicide not long afterwards.  This leads to my only criticism of this movie.  They do not show the suicide onscreen.  Instead they simply put some text up on the screen in an “oh, by the way” kind of presentation that tells everyone Turing killed himself.

After spending two hours on this man’s story the movie would have had a FAR greater impact if it had shown this key event.  Maybe the filmmakers thought it would be too depressing.  I don’t know.  All I can say is that, for me at least, it was a little anti-climactic.

END OF BOTH SPOILER SECTIONS

As played by Cumberbatch Alan Turing is a man who is brilliant, but who has no concept of the social graces, jokes, or why anyone should care what another thinks of them.  This allows the film to draw a separation between Turing and the other brilliant people working around him.  People today would probably say he had Asperger’s.  In real life Turing was known to be shy, but when approached by other people they found him to be engaging.

Although I am often irritated when smart people are presented as “not normal”, it is very common in movies.  In this particular instance, it also allows the filmmakers to draw parallels to what has become Turing’s legacy in the computer field – the Turing Test.

The title of the film is how Turing originally referred to this test.  He predicted that calculating machines would become more and more powerful, eventually being able to mimic humans.  His test would be to have a human ask questions and receive answers from what would either be a human or a machine.  If the human receiving the answers could not distinguish between the answers that came from one or the other then the computer would have passed the test.  (To date, no computer has yet accomplished this.)

As presented in the film Turing is playing his own imitation game.  He is trying to get along with these other humans by mimicking their actions and responses.  For instance, at one point he tries to improve his relationship with the others by awkwardly telling a joke.  And all this time he is keeping his secret, just as a machine would be keeping its secret.  Turing is trying to imitate the others around him, but will he be able to pass the test?

Cumberbatch does a good job separating his Turing character from his Sherlock Holmes character.  As Holmes says of himself on the TV show Sherlock, “I’m a highly functioning sociopath.”  After a few minutes I was not seeing Sherlock Holmes anymore; I was seeing Alan Turing.  Cumberbatch does a good job and deserves his Oscar nomination for Best Actor.

The film received eight nominations in total, including Best Picture.  Knightley received her second, this time for Best Supporting Actress.  Norwegian director Morten Tyldum was nominated.  I confess I had never heard of him before this.  In looking at what he has done before I have heard of his last film – Headhunters (2011) – but I have not seen it.

Graham Moore was nominated for adapting the screenplay from the 1983 book Alan Turing: The Enigma written by Andrew Hodges.  It was not until near the end of the 20th century that people started finding out the true story about Turing.  His records were finally starting to be made public.

Like every film based on real people this one changes some things around and adds in elements to improve the storytelling and make it more cinematic.  Only the most ardent historian would probably be able to spot all these departures without looking them up, though.  The result is a very engaging film about a man that deserves to be far better known to the general public.  Hopefully this film will accomplish that.  I highly recommend it.