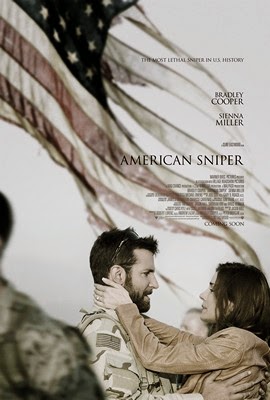 American Sniper received six Oscar nominations, including Best Picture, Best Actor, and Best Adapted Screenplay.  It is based on Chris Kyle’s 2012 best selling book American Sniper: The Autobiography of the Most Lethal Sniper in U.S. Military History.  I confess that I don’t ever remember hearing of Chris Kyle or his book prior to this film coming out.  I didn’t even know this was a movie about a real person until I started looking into the Best Picture nominees for my Oscars observations post six days ago.  Overall, this is a moving film and it is guaranteed to get people talking afterwards.


Chris Kyle (Bradley Cooper) is a wannabe cowboy in the 1990s when he sees a news report about attacks on two U.S. Embassies by terrorists.  He decides to enlist and ends up becoming a Navy SEAL.  After the wars in the Middle East start in the early 2000s he ends up deployed to as a sniper, providing cover for the troops that have to go house to house.  He is immediately tested when he has to decide whether a woman and boy are threats approaching soldiers or innocents caught in the wrong place.

Prior to deploying he married Taya (Sienna Miller) and she is pregnant during his first tour of duty.  The film periodically has phone conversations between the two to highlight the stark contrast in their lives and situations.  When he is caught in the middle of a firefight and she can hear it over the phone it shows just how helpless and scared she feels at her husband being in that situation.

You may have noted I said “first tour” in the previous paragraph.  Chris Kyle keeps going back because he feels he owes the other men he serves with the best protection he can provide.  He has quickly become known as The Legend because of his extraordinary ability at identifying and eliminating targets that are a danger to the other troops.  He says he is haunted not by the lives he has taken, but by the men he did not save.

Each time he comes home, though, he is further and further removed from his family life.  He watches all the vehicles around him.  He has the classic “thousand yard stare” of a veteran soldier who knows danger can come from any direction with no warning.  Taya doesn’t know what to do.  Her husband has returned physically, but not emotionally.  And each time he comes back he’s less and less the man she knew.

Adding to the tension in the Iraqi scenes is that there is an enemy sniper, a former Olympic champion, who is picking off Americans and Chris Kyle has the biggest bounty on his head of any American soldier in .  There are some superficial similarities to Enemy at the Gates (2001) in their rivalry.

Like any movie based on actual events they moved some things around and added in elements to improve the story.  Some of the plot points that seem the least plausible – a champion enemy sniper, a more than 2,000 yard killshot, etc. – are actually the things that are true.

If you’ve read this far you may have already been angered by my use of the words “targets”, “enemy”, etc. instead of just “people”, “sons”, etc.  Herein lies a lot of the controversy with this film.  Does it glorify war?  Is Kyle a hero or a mass murderer?

Everyone brings their own politics and beliefs in with them when they watch a movie.  I feel confident in stating, though, that anyone who thinks this movie is pro-war has either not seen it, or is willfully misinterpreting it.  American Sniper does not shy away from showing the toll all the killing takes, both on the Iraqis and the Americans.  No one gets mortally wounded then gives a five minute, stirring, cinematic speech before dying.  Someone is simply alive, and then they are dead, with a spray of blood to mark the passage of the bullet.

Don’t bother looking for intelligent discourse and debate on the film’s IMDB boards.  19 out of every 20 posts consist of one of the following three messages: “LIBERALS SUCK!!!!!”; “CONSERVATIVES SUCK!!!!!”; or “The fake baby prop sucks!”  The last one refers to the fact that an obvious doll was used in scenes where Chris and Taya were holding their baby.  According to the trivia for the film, two babies had been hired for the role, but one got sick and the parents of the other never showed up – hence, the doll.

Bradley Cooper does a great job in the lead role.  He becomes one of a very few actors to receive three consecutive Oscar nominations (Silver Linings Playbook, American Hustle, and this film.)  In regards to the first two, while I thought he did a decent job in them I didn’t see anything special with his performances.  In American Sniper, though, I felt he finally deserved the Oscar nomination for sure.

The film itself became a perfect storm at the box office.  Trailers for it had been running for a few weeks, and they were very effective at creating interest in the story.  Then the Oscar nominations for Best Picture and Best Actor were announced on Thursday.  Then American Sniper opened up the next day and it was a long weekend with the Monday holiday.  In one four day opening it took in more money than the entire box office of the other seven Best Picture nominees combined.  It set a number of records, including having the biggest January opening ever (more than double the previous record holder).  And word of mouth for the film (an A+ Cinemascore rating) should ensure that it continues doing well at the box office for some time to come.

American Sniper is a film that is almost guaranteed to get you talking afterwards.  That alone sets it apart from the large majority of movies that get released in any given year.  Then add in that it is a moving story with an Oscar-nominated performance from Bradley Cooper and this becomes a really good film.  Unless you hate movies that show the true cost of war then I highly recommend this film.