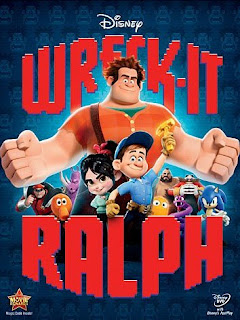 Wreck-It Ralph is the last of the five films nominated for Best Animated Feature that I saw, and it turned out I saved the best for last.  It is head and shoulders above the other nominees, and not just because Ralph is nine feet tall.  In fact, it might make it into my Top 10 films of the year.  It represents some nostalgia for people like me who played lots of video games in the 80s, as well a lot of really great humor even for the people that won’t get any of the references to real games.  To use a gaming metaphor, it is a winner.

Ralph (voice of John C. Reilly) is the villain of his game.  It is one of the early cabinet games and it is getting ready to celebrate 30 years in the arcade.  In the game Ralph goes around destroying a building and the hero, Fix-It Felix, Jr. (voice of Jack McBrayer), uses his hammer to fix up all the destruction.  This fake game is clearly based on Donkey Kong.

The concept of the movie is similar to Toy Story – the characters in the games are alive and when the arcade closes at night they have their own lives, which include visiting other games via a vast hall (the power strip the games are all plugged into.)  Ralph is tired of always being the bad guy and he has been going to “Bad-Anon” meetings held by from Pac-Man.  Cameos from real-life games are numerous and I’m sure I missed many of them.

On his way back to his own game, Ralph runs into the characters from Q-bert (a game I played a lot in college).  Their game was removed from the arcade so they have been stranded in this hall with nowhere to go.  That’s not the only danger to the characters; if they get in trouble in another game and die, they do not get regenerated like they would in their own games.  Combine that with an urban legend of a very early arcade character named Turbo going rogue and invading another game, which led to both games being removed from the arcade, and the prohibition against “going Turbo” is very strong among all the characters.

When Ralph is left out of the 30th anniversary celebration of his own game, though, he has finally had enough.  He’s told that if he earns a hero medal they’ll accept him.  He heads to another game named Hero’s Duty.  It is a modern game and he is bewildered there.  “When did games get so scary and violent?”, he wonders.  He meets tough as nails Sgt. Calhoun (voice of Jane Lynch) who is prone to statements like “Armageddon and Doomsday just had a baby, and boy is it ugly.”  Ralph manages to stumble onto the hero medal awarded here and he takes it.  He tries to fly away in a spaceship, but it gets invaded by one of the evil bugs in the game.  He ends up crashing inside the game Sugar Rush.

He fights off the bug, which sinks out of sight into a pool of liquid.  During the skirmish Ralph loses his medal.  He sees it hanging from a tree, but before he can get it it is scooped up by a little girl named Vanellope von Schweetz (voice of Sarah Silverman), who thinks it is a coin.  Needless to say, Ralph and Vanellope hit it off badly.  She uses the medal as her entry fee into a car race that all the characters in her game run at night to determine who the key racing characters will be when the arcade opens the next morning.  King Candy (voice of Alan Tudyk, channeling Ed Wynn as The Mad Hatter from in Wonderland) declares her ineligible to race since she is a “glitch”.  He tries to have her arrested and in trying to get away she runs into Ralph again.

She explains that his medal is gone, but if she wins the race she gets it back.  Ralph reluctantly agrees to help her.  They build her a racing car, but then Ralph finds out his hopes are being placed on someone who has never driven.  She insists she’s a good racer though because “it’s in my code.”  After several false starts Vanellope is suddenly racing like a champ on a makeshift track Ralph made.  It’s my favorite scene in the movie because in the driving clips Vanellope is simultaneously adorable and badass.  So much for all the early arcade games that never had female characters as the principals.

On a related note, some members of the SOPWAUBE (Society of People Who Are Upset by Everything) have said that they are offended by the use of a “sex song” during this scene.  The song in question is Rihanna’s Shut Up and Drive.  Don’t worry parents.  There is actually nothing explicit in the song; it’s all metaphors.  If your precious little Timmy or Tammy is precocious enough to understand what a metaphor is, know how to recognize them, and understand how the metaphors in this song like "you've got the keys, now shut up and drive" can be interpreted to mean sex, then the presence of the song in the film is not “corrupting” them any more than they already are.  The vast majority of children will hear a song about driving, which fits perfectly with the scene.

While all this is going on Felix has gone looking for Ralph because their game had an “Out of Order” sign hung on it because Ralph was missing from it.  If Ralph doesn’t get back, the game is going to be removed from the arcade and they will be stranded like Q-bert.  Felix runs into Sgt. Calhoun, who is looking for the bug that escaped her game.  It will reproduce and wreak havoc if it’s not stopped immediately.  There are a lot of goo-goo eyes from Felix sent Calhoun’s way, and not without reason.

In addition to the humor and the nostalgia, the story itself is quite good.  It works both for kids and adults.  There are good questions on what it means to be a hero, how some things that seem evil might be right, and how some things that seem right might be evil.  There are also some exciting action scenes, and again, I loved every second of Vanellope racing in her car.  Unless you think animated movies are “only for children” (which means you haven’t been watching the right animated movies) then I highly recommend this film.