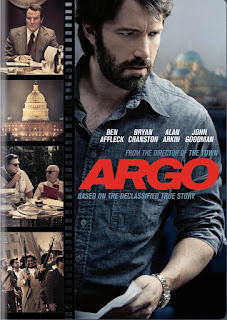 As I write this review Ben Affleck has just won the DGA’s Best Director award for Argo.  This adds to Affleck’s and the film’s wins at The Golden Globes, the PGA awards, and the SAG awards.  The only major guild it failed to win an award from was the WGA. loves movies about themselves.  Just last year the Best Picture Oscar went to The Artist which was about the start of the sound era in .  To add even more to Argo’s plus side, the people get to be heroes in the story.  All of these wins and the characteristics of the film have combined to push Argo to the favorite position for winning Best Picture at the Oscars.  And all of this despite Affleck not even getting an Oscar nomination for Best Director.

Yes, with nine Best Picture nominees and only five Best Director nominations available, some people were going to be left out.  In this case both Michael Haneke’s and Benh Zeitlin’s nominations ahead of Affleck really surprised people.  Now that I have seen all three of their films I feel that Affleck definitely deserved to be nominated, I would keep Zeitlin in there because of the results he got out of almost all non-professionals, and I would drop Haneke, who is a darling of the critics, but whose nomination this year seems more of an “It’s time we honored him” nomination than anything else.

Argo is based on parts of CIA agent Tony Mendez's book The Master of Disguise and on an article about the attempt to rescue six Americans trapped in after the American Embassy in was invaded by Iranians in 1979.  Most people know about the 52 hostages that were held for 444 days, but fewer people know about the six Embassy workers who managed to escape and hide from the Iranians.  For those who were old enough to have been following these events, or for those who know their history, the basics of Argo will not be a surprise, but for everyone else the story will be brand new.  Because of this, some fictional scenes were added into Argo to pump the tension up even more.  Even though I already knew how it turned out, I was still very caught up by the film.  It definitely worked for me.

There are dozens of familiar faces in the cast, from Bryan Cranston, to John Goodman, to Alan Arkin (who received a Best Supporting Actor nomination), to Tate Donovan, to Kyle Chandler (who was also in Zero Dark Thirty), and even to an uncredited cameo by Philip Baker Hall.  There were also two people I didn’t recognize under the period hair and glasses they were wearing – Clea Duvall and Rory Cochrane, who both played two of the trapped Americans.  (At the end of the film a series of photos of the real people are shown so that you can see how closely their looks were recreated for this movie.)  The clear star of the film is Ben Affleck, though.  It’s his character who initiates the plan and who leads the attempt to get the Americans out.

CIA agent Tony Mendez (Affleck) comes up with a plan to go into as part of a fake movie shoot, add the six trapped Americans to the movie crew as Canadians, and then simply leave the country right through the most watched airport on the planet.  The Canadian government had already been secretly housing the trapped Americans at great risk to their own people in , and they also provided fake passports to the Americans.  You can’t just claim to be making a film, though, so Mendez flies to to get some help in creating a fake movie.

He starts with special effects makeup man John Chambers (John Goodman), who had worked with the CIA before.  Chambers brings in Producer Lester Siegel (Alan Arkin) and the two proceed to take the press by storm on the sci-fi movie named Argo that they are going to make.  They even hold a read through of the script for the press.  (Watch for a fun cameo from 80s B movie queen Adrienne Barbeau as one of the cast members).  And in the “truth is stranger than fiction” category they really did get comics legend Jack Kirby to draw the storyboards for the film.

With all of this in place, Mendez flies into and applies for a permit to make a movie.  When he meets with the trapped Americans and tells them his plan to get them out, their reactions range from “are you kidding?” to “ARE YOU FUCKING KIDDING?”  He explains that he is a specialist and that this is exactly what he does – extract people from dangerous situations.  One of them asks how many times he’s used this ploy before and he admits this is the first time.

Mendez finds out he will get a permit to film only if he brings his whole crew to a public market in the center of .  The six people who have been hiding for months, and who will very likely be killed as spies if they are ever found, are now being told they have to walk right among thousands of Iranians in the very crowded marketplace, all while pretending to do various film crew jobs that they knew nothing about 24 hours earlier.  Needless to say, this is one of the tensest scenes in the film.

One of the things I liked about the movie was all the little touches to set the period and to sometimes inject brief moments of humor.  Examples include a Kentucky Fried Chicken that is still open in Tehran with Iranians chowing down on chicken outside of it; one man telling Mendez that the upcoming meeting with two senior government officials they need approval of the plan from will “be like talking to the two old guys from The Muppet Show”; and a wall of star photos being shown and in among Cary Grant, John Travolta and a dozen others is a picture of Lee Majors who was a huge star in the late 70s from his TV show The Six Million Dollar Man.

Goodman and Arkin also get some funny lines about working in .  The one comment that now ends up being most interesting in light of Ben Affleck not getting an Oscar nomination for his directing is when his character asks if one of the trapped Americans can truly learn to be a director in a day and Goodman’s character responds, “you could teach a rhesus monkey how to be a director in a day.”

I still have to see three of the Best Picture nominees, including both Lincoln and Silver Linings Playbook, so I can’t yet say if Argo would be my pick for Best Picture.  I can say that it and Life of Pi are the only two that I have given four out of five stars to so far and that Argo is the more consistently engaging of the two.  If you haven’t seen Argo yet then I highly recommend that you do.