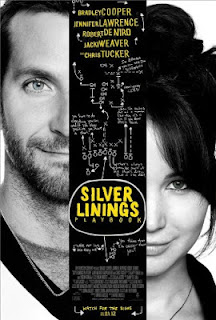 Before seeing Silver Linings Playbook I had already heard that it was getting good word of mouth from people who had seen it, and that critics liked it, too.  Now that I have watched it I understand the former, but not the latter.  It is a romantic comedy/drama, a genre that movie goers tend to like, but that critics tend to dislike.  And when you get right down to it, other than the mental illness angle, this is a pretty conventional movie for the genre.  In other words, there’s nothing really that different about it to make it more understandable to me why critics like it.  Don’t get me wrong; I enjoyed this movie.  Then again, I tend to like movies in this genre, so that doesn’t surprise me.

This movie is notable for having nominations in all four acting categories: Bradley Cooper for Best Actor; Jennifer Lawrence for Best Actress; Robert Deniro for Best Supporting Actor; and Jackie Weaver for Best Supporting Actress.  Some people say that Weaver didn’t deserve a nomination, but I don’t have a problem with it.  She doesn’t get any big, showy, “Oscar scenes” where she is yelling or crying (Sally Field has several in ).  Instead Weaver plays the quieter presence, trying to do right for both her husband and son.  If you think about it, director David O. Russell's last film – The Fighter – had three of the four main performers nominated and people wondered why the fourth (Mark Wahlberg) was not.  He was the one playing the quiet role in that film, too, while everyone else around him got to play the loud, showy roles.

By the way, the only other films in Oscar history to receive nominations in all four acting categories are Who’s Afraid of Virginia Woolf, Sunset Blvd., A Streetcar Named Desire, Network, and the most recent one, Reds in 1982.  No film has ever won in all four categories.  Both Streetcar and Network won three of the four.  is the only one favored to win right now.  If she does she would be the second youngest woman to ever win in this category.  Marlee Matlin holds the record of 21 years 218 days for her 1987 win for Children of a Lesser God.  would be almost exactly 22 ½ years old, which is a month younger than the current number two – Janet Gaynor who won in 1929 for three roles.

Silver Linings Playbook is also the first film in eight years to even be nominated in all “big five” categories of Picture, Director, Actor, Actress, and Screenplay.  The last one, Million Dollar Baby, didn’t win all five.  In fact, It Happened One Night, One Flew Over the Cuckoo’s Nest, and The Silence of the Lambs are the only films in Oscar history to win all five.  It’s worth noting that even though all of the films nominated in all four acting categories were also nominated for the big five categories, none of them ended up winning all five.

So what is Silver Linings Playbook about?  Pat (Cooper) gets picked up from a mental institution by his mother Dolores (Weaver).  She is checking him out against doctor’s orders.  He was there for eight months as a plea bargain to avoid jail time for beating the crap out of a man he caught in the shower with his wife.  To make it worse, his wife was cheating on him while playing Stevie Wonder’s song My Cherie Amour, which was their wedding song.  Ever since, Pat has violent fits when he hears it.

When Pat gets home his father Pat, Sr. (Deniro) is a little hesitant, but then tries to put things back to normal by having his son watch the Philadelphia Eagles game (that’s American football for the non sports fans).  Pat, Sr. is immediately shown to be at least as “crazy” as his son.  Pat, Sr. has been banned from going to the games because he got in too many fights there.  He also has a huge amount of OCD, including believing that the outcome of the game depends on whether Pat watches it with him or not.  Dolores just tries to ride herd over both of them.  Pat does not adjust well, or at all, to being home.

Pat gets set up with his friend’s (John Ortiz) wife’s (Julia Stiles) sister Tiffany (Jennifer Lawrence).  doesn’t appear in the film until almost a half an hour into it, by the way.  There doesn’t appear to be much reason to try to put them together except they both have mental illnesses – at least according to the film (more on that in a bit.)  Pat and Tiffany do have a funny little bonding moment over the various medications they’ve been prescribed.  Tiffany likes Pat and immediately invites him in to her place for sex.  He declines because he is obsessed with getting back together with the wife who cheated on him, even though she has taken out a restraining order to keep him away.

Pat is stymied by this in trying to contact his ex, so Tiffany tells him she will help him, but on one condition.  He has to be her dance partner at a local competition in a couple months.  He reluctantly agrees, still blind to the fact that Tiffany is interested in him and that this is just an excuse to be together.  By the way, the film falls back on the worst of clichés when they have a scene where the two white people have to be taught how to dance by a black person (the seemingly randomly cast Chris Tucker, thankfully dialing his voice down to a pitch that is not quite as annoying as usual.)

I mentioned that the film tries to establish that these two people have mental illnesses and that they both need love to cure them.  Pat’s illness isn’t that he understandably beat up the man who was cuckolding him with his wife, but that he was later diagnosed as bi-polar, and had been that way his entire life.  Tiffany’s mental illness is even less believable as an illness.  After her husband was killed on a shopping trip to buy lingerie to spice up their sex life, she had sex with several people she worked with and lost her job.  That’s it.  Since when did wanting and liking sex, and being honest about wanting and liking sex, become a mental illness for women?  The way she has to “get well” is to be celibate.  Like the dancing thing, it’s the most clichéd of storylines – the angel/whore complex.  [More on this in a separate post tomorrow.]

Despite using these most clichéd of plot devices, I still enjoyed the film.  Frankly, I don’t watch movies in this genre looking for surprises; I watch them because I want to see what I am likely to see.  They are a comforting couple of hours amidst a darker world.  If you would like to experience some of the comfort that this film brings then I highly recommend you see it.