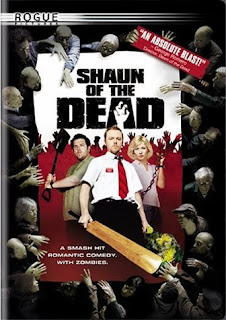 All three of these guys loved zombie movies and there had been a bit of a revival in interest in them with 2002’s 28 Days Later and the upcoming (in 2004) remake of Dawn of the Dead.  As you can tell from the title being a play on words on Dawn of the Dead, this movie is a comedy.  In fact, they claimed they had created a new genre, the “rom-zom-com.”  A “rom-com” is a romantic comedy, so a “rom-zom-com” is a romantic comedy with zombies.  You might not think the combination would work, but it does.

I mentioned in an earlier post that the whole zombie genre of movies doesn’t do much for me and that a movie would have to be something special to get a recommendation from me.  Well, this is one of those movies.

A few things to be clear on:  1. This is a comedy, not a spoof of the genre.  2.  It is also a horror movie.  This is some gore in it.  3.  It is also a romantic comedy, so it’s got plot elements about a guy trying to win his girl back by saving her from the zombies.

Simon Pegg and Nick Frost play flatmates in .  Pegg’s character is kind of a slacker who doesn’t want to do much other than hang out at the local pub with his buddies.  His girlfriend finally gets fed up and breaks up with him.  He practically becomes a zombie himself, emotionally anyway.  There is a funny scene where he trudges out of his flat, down to the corner store and back, completely oblivious that all around him has become a zombie apocalypse.

When he and his buddy finally do realize that something bad is going on they decide to head for the best place they can think of to hunker down and wait out the problem – their local pub.  Pegg’s character decides that he first has to track down the woman who has just broken up with him and take her with them.  By saving her, he figures she will see that he’s worth keeping.  Needless to say, when they finally do run into her she is thoroughly unimpressed with his plan to hide out in the local pub.

The movie has numerous references to other horror films and I’m sure I missed a lot of them by not being a fan of the genre.  It didn’t hurt my understanding or enjoyment of the movie, though.  A couple of things I did pick up on were little digs at the popular 28 Days Later.  That movie had featured “fast zombies” instead of the slow, shambling ones seen ever since 1968’s Night of the Living Dead.  (And if you want to be technical, in 28 Days Later they weren’t actually zombies at all, but living humans infected with a virus.)  It also had the hero, a British man in , for some reason wielding an American baseball bat as a weapon against the zombies.

Pegg, Wright, and Frost decided that their zombies were going to be the slow kind.  So slow in fact, that some of the humor comes from the characters making fun of the zombies because they are so easy to get away from – at first.  The filmmakers also deliberately had their hero (Pegg) wielding a cricket bat, something much more fitting for a British man in .

For everyone, I say give this movie a try.  It is a good combination of comedy and horror, not unlike An American Werewolf in .  If you are a fan of horror movies in general, and zombie movies in particular, then I highly recommend this movie.