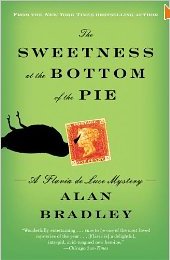 There aren’t too many seventy year old first-time novelists, but Alan Bradley is one of them.  In The Sweetness at the Bottom of the Pie he has created a very entertaining character.  Her name is Flavia de Luce and she is an eleven year old girl living in in the summer of 1950.  Her mother was an adventurer who died, so she lives with her father and two older sisters in a huge old family house.  Flavia spends her days reading through the house’s massive library, tormenting her sisters, being tormented by them, and experimenting in her great uncle’s abandoned chemistry lab.  She finds that she “has a particular passion for poisons.”
One morning she stumbles over a dead body in the garden outside her house.  Instead of being frightened she feels that it’s the most interesting thing that has ever happened in her life.  Like a miniature Sherlock Holmes she decides to figure out who he was and what happened to him.  As you can tell, she is not your ordinary little girl.
The book opens with her bound and gagged in a closet.  She works her way free of the ropes, jimmies the lock on the closet door, and has just enough time to fix her pigtails before descending the stairs of her house for dinner.  It was her sisters that had locked her up as part of an ongoing set of skirmishes among them.
This is just an example of the tongue in cheek humor that is sprinkled throughout the book.  The story is told from Flavia’s point of view and it comes across as quite true.  Even though she is an extraordinary girl, she is still an eleven year old and this is shown in the book.  At one point she remembers that her oldest sister had told the other two that if a man ever tries to grab them that they should kick him in his “misters”, but she doesn’t know where those are, so it doesn’t help her in her current situation.
In addition to a fully developed character in Flavia, the author also spends time re-creating the world of 1950 for the reader - from the foods they eat, to what they listen to on the radio, to the bicycle (named Gladys) that Flavia speeds around the countryside on searching on clues.
I loaned the book to a woman I knew and I deliberately didn’t tell her anything about the character.  I had read a review of the book, so I pretty much already knew what to expect, but the book opens in a way that is obviously intended to catch the reader by surprise.  I wanted her to have that surprise, but it backfired.  She ended up thinking that this was actually a children’s book because the main character was an eleven year old girl.  While there is nothing in the book that a parent should worry about their own eleven year old reading, the book was intended for the mainstream mystery audience.  Because of that previous error in my judgment I have gone into some detail on her in my review here.
Readers really liked the character of Flavia, so there was an immediate question of whether there would be more books about her sleuthing.  There are.  The second book is titled The Weed That Strings the Hangman’s Bag and it is as fun a read as the first.  While refreshing my memory on these two books I found that a third one, titled A Red Herring Without Mustard, was just published.  I have already put in an order for it.
If you like mystery novels at all then I highly recommend this book.  I think you will really get caught up in the main character and her adventures.  If you like this book then I recommend the other books written about this character, too.