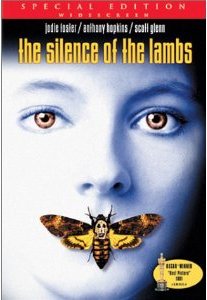 This movie stars Jodie Foster and Anthony Hopkins.  Jodie Foster is one of the few child actresses that made a successful transition into adult roles.  She had already won one Oscar for The Accused before winning again for this movie.  Anthony Hopkins had been making movies since the late 60s, but this is the one that made him a household name.
It was directed by Jonathan Demme, who went on to do .  It was adapted by Ted Tally, who also adapted the prequel Red Dragon.
The premise is that young FBI agent Clarice Starling (Foster), in order to capture a serial killer who preys on women, asks for help from Dr. Hannibal “the cannibal” Lecter (Hopkins), himself a serial killer who is in a maximum security prison.  Lecter is extremely bright and decides to play mind games with the FBI agent while he is helping.  There is something in it for him, though – “quid pro quo Clarice” – and it leads to an absolutely riveting final act of the movie.

I remember watching this in the movie theater and being just absolutely in suspense as Starling tries to make her way through the pitch black of a cellar where a serial killer may be waiting for her.  A few women in the audience were making little fear noises since it was probably hitting even closer to home for them.
While this scene is my favorite from the movie, the most famous scene is undoubtedly the “fava beans and a fine chianti” scene when Lecter is first verbally sparring with Starling.
In Hannibal Lecter Hopkins brought to life a character for the ages.  He is simultaneously a repugnant monster and so fascinating that you cannot take your eyes off him.  Demme deliberately shot a number of ’ scenes in extreme close-up, and ’ unblinking stare has been justifiably compared to a snake hypnotizing a bird before striking.
There have been a sequel () and two prequels (Red Dragon and Hannibal Rising) shot after this one.  Red Dragon was actually a remake of Manhunter, which was shot before The Silence of the Lambs.  Hannibal and Red Dragon have back again as Lecter.  Manhunter and Hannibal Rising have other actors in the role.  Foster did not appear again in any of these movies.  Don’t watch any of them expecting anything close to the quality of The Silence of the Lambs.
Chip's Rating: 5 out of 5 stars