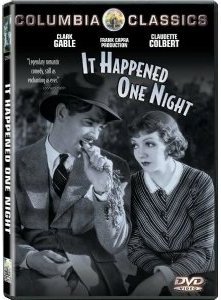 This movie stars Clark Gable and Claudette Colbert.  If the names are not familiar then this is an excellent movie to introduce them to you.  Gable would go on to do Mutiny on the Bounty and Gone with the Wind.  Colbert would go on to do The Palm Beach Story.
It was directed by Frank Capra, who went on to do Mr. Smith Goes to and It’s a Wonderful Life.  It was adapted by Robert Riskin, who went on to write You Can’t Take It with You and Meet John Doe.
The premise is that a spoiled heiress (Colbert) has run away from home and her family offers a reward for her return.  A newspaper reporter (Gable) finds her and in order to protect his story and get the reward he tries to secretly guide her home on his own.  This proves to be a lot harder than he thought.  She treats him like a servant.  He teaches her about the real world.  fly.
This movie is a great combination of comedy and romance.  It has been said that this movie created the Screwball Comedy genre, which was very popular in the 30s and 40s.
It was also quite scandalous for its time.  A running joke is that these two have to sleep in the same room and Gable strings up a blanket – “the walls of ” - to separate the two beds.  It even showed Colbert in her undergarments and Gable bare-chested.  If the internet existed in 1934 there would have been a whole lot of “OMG!”s being posted.
There are many great scenes and the one where Gable tries to show Colbert how to flag down a car while hitchhiking is justifiably a classic.
Chip's Rating: 4 out of 5 stars