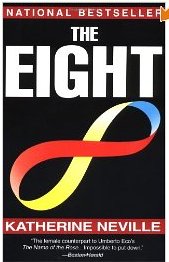 If I told you about a woman who had been a model, a computer expert who worked with IBM, Honeywell, OPEC, and the U.S. Dept of Energy, an executive with Bank of America, a painter, a photographer, and a writer, you’d probably be thinking, “Yeah, right.  In a James Bond movie maybe.”  Well, I just described author Katherine Neville, whose first book was The Eight.
Long before The Da Vinci Code was a glimmer in Dan Brown’s head Neville published The Eight and it makes The Da Vinci Code look like a quick knockoff.
The Eight involves two parallel storylines, one taking place during the French Revolution and the other taking place in the 1970s just before OPEC started rationing oil.  Both storylines involve women trying to find and protect an ancient chess set given to Charlemagne over a thousand years ago by a Persian alchemist.  This set was said to grant great powers to the people who possessed it and to have almost destroyed Charlemagne before he ordered it hidden.  Whether myth or truth, many people want to get their hands on it.

The book itself has tales within tales, chess, international economics, international intrigue, suspense, puzzles, riddles, music, mathematics, alchemy, real historical figures, and seemingly a look at the whole of Western civilization since the Middle Ages.
Neville weaves quotes into the story at the start of each chapter in such a way that it makes you look at those quotes in a whole new light.  The overall book starts with two quotes that are very apropos for the narrative:
“Chess is Life” – Bobby Fischer
“Life is a kind of chess” – Benjamin Franklin
Unless your favorite kind of reading is picture books to your kids, I highly recommend this novel.
Note – Neville wrote a follow-on story 20 years after publishing The Eight.  It is titled The Fire.  It is a step down from The Eight, but I could say that about pretty much any book.  Go ahead and read it, too, but don’t expect it to be as good as The Eight.
Paperback