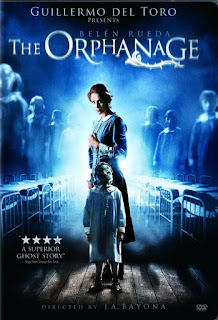 We have come to the tenth of twelve movie selections Steve Honeywell at 1001plus has made for me.  This one is The Orphanage, one of two horror films he included.  Over the years we have known each other it has been clear that Steve likes the horror genre quite a bit more than I do.  I was a little worried about having not one, but two horror films among the twelve he picked.  However, Steve also knows that I prefer suspense over gore and story over cheap scares, so he did a good job with the first one I watched – The Changeling (1980) – and as it turns out, an even better job with The Orphanage.  This is much more than “just a horror movie.”  It has a great story with a central mystery, but also has a lot of compassion for the characters in it.

Just from the aspect of being a suspenseful film The Orphanage succeeds and then some.  The hair was standing up on my arms and I was on the edge of my seat many times in the movie.  But it’s the story that lifts this film even higher.

A thirty-something husband and wife, Carlos (Fernando Cayo) and Laura (Belen Rueda), with a young son Simon (Roger Princep), move into a large house on the ocean.  Laura was an orphan who before being adopted lived in this house as a young girl when it was a working orphanage.  It has been closed for decades, though.  She and Carlos have bought it and she intends to use it to take care of five or six children with special needs.

Because of this Laura doesn’t question it much when an older female social worker shows up asking questions.  It’s when those questions seem to go off track and get too nosy about what they plan to do with the place, as well as Tomas’ hidden history (he’s adopted, but doesn’t know it), that Laura kicks her out.  Who should Laura find rummaging through their shed that night?  The same woman, who runs off.

Their son Simon had a couple of imaginary friends already so when he tells Laura he has some new ones at this new house she doesn’t think much of it.  He starts playing a game one day, though, that he says his new friend Tomas set up.  He has to follow Tomas’ clues to find something of value of his (Simon’s) that has been taken away and hidden.  The outcome of the game unsettles Laura greatly because it reveals to Simon that he is adopted.  She figured he set up the game himself, but he didn’t know he was adopted, so how could he have done it?

Soon after Laura and Carlos host a masquerade party where the children they want to take care of come and visit with their guardians and families.  During this party Simon gets angry with Laura and refuses to come down.  She leaves him there, but later when she goes up she can’t find him.  There is a child in a strange cloth sack over his/her head, though, that knocks Laura down and locks her in the bathroom.  Once she gets free she frantically searches for Simon, but cannot find him anywhere.  He has disappeared.

The rest of the film is the search for Simon and the toll it takes on Laura and Carlos.  After months pass Laura starts to believe that maybe there is something supernatural going on.  Carlos is a doctor and a rational person.  He has a great deal of patience with Laura, and he copes in his own way by tracking every little mention of a boy matching Simon’s description, but his own grief over the loss, combined with Laura’s (to him) strange behavior pushes him to the breaking point.  It would have been easier for the filmmakers to just make him unsupportive right from the beginning, but this movie takes the time to present it more realistically.  A lot of other films would not have.  It’s this depth and time that the movie takes allowing the emotions and interactions to play out that makes it better than average.  These are real people, experiencing every parent’s nightmare.  Adding to Laura’s pain is that all she has ever wanted to do is help children, but after her own child disappears there is no way she and Carlos would ever be allowed to open a home to take care of the special needs kids of others.

Adding more poignancy to the situation is that Simon is HIV positive and needs medication, but doesn’t realize it.  Before disappearing he is reading Peter Pan and he tells his mother that he’s like Peter – that he’s never going to grow up.  While hearing this from a normal child would probably bring a smile to a mother’s face, hearing it from a child who doesn’t realize he might actually die before he grows up is chilling.  In fact, in the extras on the DVD one of the filmmakers said that this movie is sort of the story of the mother in Peter Pan.  Sure, the kids all fly off to Neverland and have wonderful adventures, but what about the mother who is left back at home not knowing why her children disappeared?

Finally, the story is great because it all fits together, from the old lady, to the noises in the house, to the children’s games being played.  There is a reveal that I didn’t see coming, and it doesn’t just appear out of left field, either.  It is logically set up earlier in the film and when you realize what is going on it’s very moving.  And the ending is very fitting for the film and references many things we’ve seen earlier in the movie.  I’m not ashamed to say that I got misty eyed not once, but twice, during the latter part of the movie, and for different reasons.

Even though this is a horror film it mostly avoids two of the overused tropes of the genre – the jump scare and the score suddenly making a noise to tell you when to be scared.  These are the go to triggers a director uses when they know their movie just isn’t that scary.  In fact, the one jump scare in the film is also the one gory moment, and it frankly feels out of place with the rest of the movie.  This is only a minor quibble on my part.

The Orphanage ended up being nominated for fourteen Goyas (the “Spanish Oscars”) and it won seven of them.  That’s pretty amazing when you consider that this was the first film for both the screenwriter and the director.  They would collaborate again on the English language film The Impossible (2012), which received an Oscar nomination for Best Actress for Naomi Watts.

Just on the basis of how suspenseful it is The Orphanage would have received four stars from me.  Add in the mystery, the emotions, the reveal I didn’t see coming, and a very poignant ending, and this becomes a five star film for me – the first one I’ve seen in quite some time.  I give this my highest recommendation.