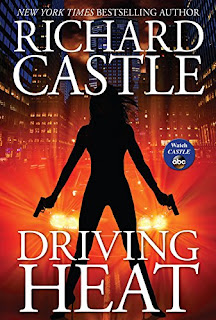 Driving Heat is the seventh Nikki Heat book by “Richard Castle”, the fictional writer on the TV show Castle.  The actual author of these books is speculated to be one of the real authors who have appeared on the show (i.e. Michael Connelly, James Patterson) or one of the show’s creators (i.e. Andrew Marlowe).  Like the first six books, this one has events or plot points similar to things that have happened on the Castle TV show in the prior season.  However, this book may be the most standalone one yet.


While Driving Heat picks up a few months after the last one left off, it can be read on its own.  The author re-introduces the characters at the beginning, just as most serial detective novels do.

Prior novels had had a developing timeline where the book events were not keeping up with real time.  For instance, a few months at most would pass between books, even though they were being published once a year.  This led to the last book (from 2014) working in events from 2012’s Hurricane Sandy.  In the case of this latest book, though, I do not remember anything that might have established it as not happening in the present.

The early books in the series definitely used events we had already seen on the show as part of their plot – thereby reinforcing the concept that we are reading something from the fictional character on the show.  More recently, however, the books have come to parallel events in the show – things we read in the latest book end up developing into stories on the show.

The case in point here is that when Driving Heat opens Nikki Heat has been promoted to Captain and she has taken over the precinct at which she was the lead detective.  She and Rook (the Richard Castle analogue) clash over their competing careers and how they intersect now that she is Captain.  I am no longer watching the show, but my understanding is that this season Beckett has become the Captain and she and Castle are having a rough time of things.

Driving Heat starts right out with Heat’s psychologist being found dead.  She noticed Rook reacting, and knows that he knows something, but she can’t get him to tell her because it’s part of a story he is working on and he feels that professional ethics prevent him from discussing it.  This is what starts to drive a wedge between them, especially when Heat discovers that Rook actually was interviewing her psychologist before he died.

As if this wasn’t enough, Heat’s promotion to Captain has left a vacancy in the position of lead detective.  Both Raley and Ochoa (the book’s analogues for Ryan and Esposito) want the position and maneuver to get it.  As a stop gap she names them co-leads, but this just drives a wedge between them, too.  Even though she is Captain she still spends quite a bit of time investigating.

The case gets more complicated when someone else Rook was interviewing also ends up dead, this time in a spectacular fashion.  Seeing a pattern they try to follow-up with someone still living and end up having to protect him from a drone attack.  Things get more complicated from there.

As always Driving Heat has some fun references for people, including ones that are outside both book and show.  There is a piece with an investigation into fatalities from deficiencies in cars, the aforementioned flying drones, and other things.  For the show watchers who are wondering – I do not believe anything equivalent to the show’s events with Castle’s disappearance was used in this book.  Those would actually fit in better for a Derrick Storm novel, but it looks like they are not going to continue those because none have come out this year and none appear to be on the horizon.

If you liked the first six books then I definitely recommend this one.  This has become a good mystery series that can stand separate from the TV show.
Posted by Chip Lary at 5:25 PM