Movie – The Story of the Last Chrysanthemum (1939) 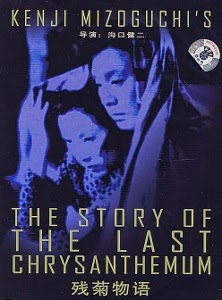 The Story of the Last Chrysanthemum, sometimes translated incorrectly as The Story of the Late Chrysanthemum, is a Japanese film originally titled Zangiku monogatari.  It is based on the Shofu Muramatsu novel of the same name and directed by Kenji Mizoguchi (Sansho the Bailiff, Ugetsu).  It is considered Mizoguchi’s best film made prior to WWII.  In fact, of his seven films on the They Shoot Pictures Don’t They list it’s the only one made prior to 1952.  It tells a simple, but timeless tale of love and achievement.


Kikunosuke Onoue (Shotaro Hanayagi) is a young actor in late 1800s .  He is the adopted son of legendary actor Kikugoro Onoue (Gonjuro Kawarazaki).  Kikunosuke acts in his father’s troupe and will take it over someday when Kikugoro retires.  All the other performers he works with praise Kikunosuke to his face, but say how bad his stage acting is behind his back.  At first it only seems like jealousy for his position, but we find out it is true when one person is brave enough to finally tell him to his face.

That person is Otoku (Kakuko Mori).  She is the wet nurse for Kikugoro’s infant son.  She frankly tells Kikunosuke that he stinks, and that he is just getting by on his father’s fame.  She believes in him, though, and she tells him he can truly be a good actor like his father if he applies himself.

The two of them start spending time together, and eventually fall in love.  When they ask to marry, Kikugoro wants none of it.  There would be a huge scandal if his son – part of acting “royalty” – were to marry a lowly servant.  He fires Otoku to keep her away from his son.  Of course, this just makes Kikunosuke all the more determined to marry her.  His father warns him that if he leaves to be with Otoku that he will disown Kikunosuke.  This creates a massive rift between father and son and Kikunosuke leaves.

He finds Otoku and the two live together for years, toiling at menial jobs, trying to make ends meet.  Otoku encourages Kikunosuke to take whatever acting jobs come along with the goal of becoming a real actor.  In fact, Otoku is self-sacrificing to a fault.  Everything she is or does is for Kikunosuke because of her love for him.  Naturally, the film explores just how much she might deny herself for his success.  If you’ve seen any of Mizoguchi’s films then you know they are not lighthearted romps where everyone lives happily ever after.  And if they were, he probably would not get anywhere near as much praise from film critics.

Ultimately, the story in this film is a pretty simple one.  The movie runs nearly two and a half hours, though, so it is somewhat slow moving.  Mizoguchi employs quite a few long takes for scenes throughout the movie.  We see multiple re-creations of scenes from the Kabuki Theater of the time, which you may or may not find interesting.  If you are looking for lots of action then this is not the film for you.

On the other hand, if you’ve seen either Sansho the Bailiff or Ugetsu and liked them, then you should definitely check out this earlier film from Mizoguchi.  And if you’ve never seen anything by him this is not a bad place to start.  If this film sounds interesting then I recommend you give it a try.