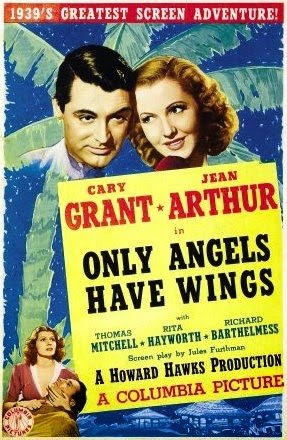 In the crowded year that was 1939 Only Angels Have Wings still managed to get two Oscar nominations.  It didn’t win either of them, but this isn’t the kind of film that would really win Oscars anyway.  This is far more Adventure Theater than Masterpiece Theater.  It has manly men performing daring feats of flying and the women who love/lust after them.  It is directed by Howard Hawks who had a talent for comedy, drama, and adventure.  This is a film that should certainly entertain you.


Who better to star as the alpha male top pilot than Cary Grant?  Maybe John Wayne would be a more common answer a decade later, but he was busy becoming a star that same year in Stagecoach.  Maybe Clark Gable would have been the first answer back then, but he was busy becoming an iconic character in Gone with the Wind.  At the time Grant was probably known more for comedy than adventure (he had been the star in Howard Hawks’ Bringing Up Baby the prior year and Topper and The Awful Truth the year before that), but in 1939 he made both this picture and Gunga Din and they successfully expanded the kinds of roles he was seen in.

Co-starring with him is Jean Arthur, who was probably best known for her work with Frank Capra (Mr. Deeds Goes to Town, You Can’t Take It with You, Mr. Smith Goes to ).  Reportedly, she and Hawks fought quite a bit because he wanted her to play a Hawks’ kind of movie woman and she preferred to play her usual Capra kind of movie woman.  The difference is one of sexiness vs. goodness.  Hawks told her that someday he’d essentially put her character in another movie and show her how good her role could have been if she had followed his direction.  That movie ended up being To Have and Have Not with Lauren Bacall.  Bacall’s character even repeated a key line of dialogue from Arthur’s character – “I’m hard to get.  All you have to do is ask.”

Arthur plays singer Bonnie Lee who gets off a ship in the fictional South American .  She meets Geoff Carter (Grant), a pilot who flies dangerous trips through a high pass in the in order to deliver mail to the interior.  He’s good looking, charming, dangerous, exciting, and explicitly says he wants nothing to do with a woman who would just tie him down and try to get him to stop flying.  This naturally makes him 100% pure grade catnip for Bonnie and she decides to stay in Barranca when her ship leaves.

We find that Geoff’s company is competing for a lucrative contract.  If they can show that they can consistently make the run through the high pass then they win the contract.  This means that come hell or high water (or fog or snow) they have to make the flight.  They have lost several pilots already.  One of them (Thomas Mitchell) is getting older and his eyesight is such that he can no longer safely fly the route.

Enter a new pilot named Bat MacPherson (Richard Barthelmess) and his wife Judy (Rita Hayworth).  Geoff recognizes MacPherson as a pilot who bailed out of a doomed plane and left his mechanic to die in the crash.  And that mechanic just happened to be the brother of the pilot whose eyesight is going bad.  This makes MacPherson a pariah among the other pilots.  Making matters worse, Judy is a former flame of Geoff’s who broke up with him when she couldn’t convince him to stop flying.  Apparently she has a type.

This was the first major film role for Hayworth.  Although she didn’t have to wait 80 films to become a star like John Wayne did, she had made about 30 movies before this one.  On the other hand Barthelmess was a former silent film star whose career had gone downhill when sound came in.  His best known role is probably The Yellow Man in 1919’s Broken Blossoms or The Yellow Man and the Girl.

You’ve probably already guessed that Bonnie falls hard for Geoff and of course tries to get him to stop flying.  Let’s just say that her methods get extreme.  You’ve probably also guessed that Geoff has to use MacPherson as a pilot in order to try to win the contract and that something bad happens again.

Although Jules Furthman is credited with writing the screenplay it was really Hawks’ story.  He was around pilots in the early days and saw how they stoically faced danger every time they went up.  He wrote a short story titled Plane from Barranca which was the basis for this film.

Only Angels Have Wings has adventure, danger, romance, humor, tragedy, and music all rolled into a single two hour film starring Cary Grant, Jean Arthur, and Rita Hayworth, and it is written and directed by Howard Hawks.  That’s a pretty damn good recipe for an entertaining movie and if it sounds interesting then I recommend you give it a try.