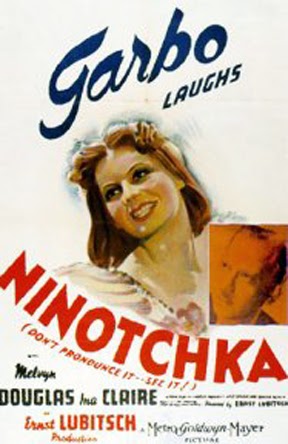 As you can see from the poster to the right this film was marketed as “Garbo Laughs”.  Although popular with audiences she had a reputation for playing stern or melancholy characters in dramas and melodramas.  This marketing plan was quite successful, but also misleading.  Greta Garbo had laughed onscreen in quite a few of her movies – Queen Christina (1933) comes to mind – but she had not been in a big out and out comedy.  With a co-writing credit from Billy Wilder and direction from Ernst Lubitsch Garbo was certainly in good hands.  This is a predictable, but entertaining, movie.


The film is set in contemporary .  Three Soviet agents arrive to sell off the jewelry of the Russian nobility that they overthrew in the Communist revolution.  As it turns out a former Grand Duchess is living in exile in Paris and finds out that some of the jewels used to be hers.  She sends her playboy lover, Count Leon (Melvyn Douglas), to retrieve them.  He is able to easily seduce the three bumbling Soviet agents with the decadent (to them) lifestyle that capitalism brings with it.  They stay at the finest hotel.  They flirt with beautiful Parisian women.  And while this is going on the Count gets a court injunction against the sale of the jewels.

Having failed in their mission, and in no hurry to go home, a new agent is sent to retrieve them and complete the mission to sell the jewels.  She is Nina Ivanovna Yakushova, or Ninotchka for short.  She is played by Greta Garbo.  Ninotchka is about as humorless as a person can possibly get.  She lives only to fulfill the promise of communism and to serve her country.

As often happens in the world of movies Leon and Ninotchka meet without knowing who each other is.  He flirts with her; she attempts to study him as a representative of the dying Western civilization.  There’s kissing involved – pleasure for him; scientific research for her.  Once they do find out about each other they break it off.

Count decides he’s going to seduce her with the West just like he did the three men before her.  And if he can also seduce her as a man seduces a woman then so much the better.  Ninotchka is impervious to his charm, though.  He tries again and again to make her laugh with no success.  Of course, this wouldn’t be much of a romantic comedy if he didn’t eventually succeed.  And the poster for the film also lets you know that she eventually does laugh.

This film received four Oscar nominations, including Best Picture and Best Actress.  The other two nominations were both for writing.  This was during the time that the Oscars had awards for both Original Writing and for Screenplay.  It did not win any of the four.

Without knowing it I had actually seen the 1957 remake of this film many years earlier.  It was titled Silk Stockings and starred Fred Astaire and Cyd Charisse in the lead roles.  As you might imagine it featured a lot of dancing and some singing.  As I started watching Ninotchka I kept having the feeling that I might have seen it, but then not being sure.  The basic story in Silk Stockings is about a man wanting to put on a musical production, not about stolen jewels.  That made it different enough that with the large time gap between my viewings of the two films I was left in a bit of a state of limbo while watching Ninotchka.  This possibly hurt my appreciation of it a little bit.  At the very least I was slightly distracted while I was watching it.

As I mentioned, Garbo received a Best Actress nomination.  I think it was more a reward for going outside her comfort zone and playing comedy than for the actual performance.  In the film it does sometimes come across like she’s feeling ill at ease while she’s doing the drunk and comedic sections.  I’m not sure she wholly made me believe in the transition of her character.

People at the time didn’t know it, but this was to be the next to last movie Greta Garbo would ever make.  She acted in George Cukor’s 1941 film Two-Faced Woman, which was another romantic comedy.  It didn’t do as well as Ninotchka and so she retired from making films at the age of 36.

Ninotchka is an entertaining romantic comedy.  You get to see a lighter side of Garbo.  Horror icon Bela Lugosi also appears in a small, lighter role.  There are a number of what would become standard jokes about the totalitarian Soviet government, which led to them banning it.  (There were no systems to hack back then to prevent movies from being released.)  If it sounds like a film you would enjoy then I recommend you give it a try.