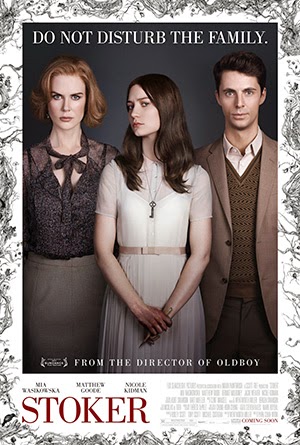 Stoker was one of my most pleasant surprises when I was working my way through a bunch of 2013 films I had heard good things about.  It’s the most recent movie I saw that made my Top 10 for the year.  It features a mess with your head plotline, a couple of mysteries, and some truly outstanding visuals.  Best of all for me, though, was that part way through the film I realized I had no idea whatsoever what direction the film was going to take.  Would it stay a drama?  Would it turn into a thriller?  Would it go places that it seemed to be hinting?  Would an element of the supernatural creep in?  Is what we are seeing 100% real, or is some of it only in the head of a character?  It did end in a way that I thought it might, but that was only one possibility out of several that came to my mind while I was watching it.


The script was written by Wentworth Miller.  If the name is familiar that’s probably because he’s made his living as an actor, most notably on the TV show Prison Break.  This is his first script and it’s definitely a good one.  I hope he decides to continue to write.  The other half of the behind the camera team that makes this movie great is director .  Stoker is his first English language film.  He is best known for his 2003 movie Oldboy.

Stoker opens on the 18th birthday of India Stoker (Mia Wasikowska).  While she excitedly searches for her traditional present of a new pair of shoes that her father hides somewhere around the house, news comes that he has died in an auto accident.  is crushed.  We see flashbacks of how she and her father Richard (Dermot Mulroney) used to go hunting together and how she was a true “daddy’s girl”.

On the day of the funeral her mother Evelyn (Nicole Kidman) doesn’t have much patience with .  We soon see that the two have a strained relationship.  We also learn that Evelyn and Richard had been having trouble in their marriage, probably because Richard paid more attention to than to Evelyn.  All of these things pale next to the biggest event in both ’s and Evelyn’s lives that day: the arrival of Richard’s brother Charles (Matthew Goode).

is taken aback for one big reason: she never even knew she had an Uncle Charlie, as he tells her to call him.  She confronts her mother about why she was never told and the mother says Richard barely even mentioned this brother to her.  As it turns out, Charles is a world traveler.  He’s been on the go his entire life, which is why he’s never come to visit Richard.

It’s not long before Evelyn is getting seriously attracted to Charles.  He has interesting story after interesting story – but all only hinted at.  He’s rich.  He speaks foreign languages.  He’s a gourmet cook.  He’s handsome and has charm to spare.  And it’s not just Evelyn who’s being charmed by him, but , too.  All of a sudden she’s lost her father – the most important person in her life – then just as suddenly here is a quasi-father figure who is extremely fascinating and who seems to “get” her far more than her mother does, or even her father did.  All the girls at her high school ooh and ahh when he comes to pick her up in a shiny new red sports car.

Things aren’t all kosher with Uncle Charlie, though.  Older people, like his and Richard’s Aunt Gwendolyn (Jackie Weaver) and a longtime housekeeper for the Stoker family (Phyllis Somerville) both react with surprise and apprehension when they see Charles.  We know there’s something up with him, but what?  And why is he sticking around, getting to know Richard’s family after never having been in contact with them before?  And what is this connection that he and have?

Sure, you may think it’s pretty basic what is going on and how Charlie fits in, and you may be partially or even wholly right about it, but the real question is where is the film going to go.

In addition to the story, there are some fantastic visuals in this movie.  My favorite is when a close up of hair being brushed transitions into a field of tall grass blowing in the wind.  There are many more interesting shots and approaches to a scene that keep things just a little off kilter.

And as you might expect from a film there are a couple of scenes that are quite sexy, but also disturbing if you really stop to think about them.  One is the sexiest piano duet ever put on film.  Another involves a pair of high heels.  To say any more would be a spoiler for what is a great culmination scene.

Those folks who prefer to avoid films that have concepts outside the norm will probably want to skip this movie.  For everyone else, especially those looking for a film that will take them places they don’t usually go, Stoker is highly recommended.