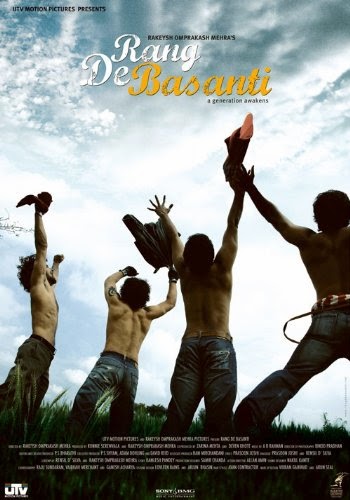 Among the handful of films that appeared for the first time on IMDB’s 2013 year end Top 250 list was Rang De Basanti.  Along with Incendies (2010) and Departures (2008) this year brought to my attention three fantastic foreign films.  While Incendies is a heavy drama wrapped in a mystery and Departures is a comedy/drama, Rang De Basanti starts out as almost a pure comedy, but at a certain point it not only transitions into a drama, but a deadly serious drama.  The comedy is hit or miss, but the drama is very effective.


Western audiences who have watched the more popular Bollywood films will recognize Aamir Khan (Lagaan, 3 Idiots) as Daljeet, aka DJ.  Other than a cameo by Om Puri (Gandhi) the rest of the cast will probably be new to most westerners.  One of the things that makes this film interesting is that it works on several levels.  In addition to playing DJ, Khan also plays a historical role as Chandrashekhar Azad, a real 1930s revolutionary who was fighting for ’s freedom from the .  And to bring things full circle, Khan’s character of DJ is also asked to play Azad in a film being made by an Englishwoman named Sue (Alice Patten).

Sue is fed up with her lack of opportunities for work in .  She had found her grandfather’s diary of when he was a policeman for the British government in .  He had met not only Azad, but several of his compatriots.  This inspires Sue to want to make a film about them and their struggle.  Having learned Hindi for an assignment that has now been cancelled she decides to pack everything up and visit an old classmate Sonia (Soha Ali Khan) in .

When Sue gets there she tries to cast actors to play the parts of Azad, Bhagat Singh, Shivaram Rajguru, Ashfaqulla Khan, and Ram Prasad Bismil, but she is disappointed at every turn.  She meets many friends of Sonia, including DJ, Karan (Siddarth), Sukhi (Sharman Joshi), and Aslam (Kunal Kapoor).  They are all young, modern Indian men.  They care far more about having a good time, playing music, and goofing off.  They think Sue is crazy to make a movie about a bunch of guys who died long ago fighting for something that can’t even comprehend.  Sue sees something in them, though, and convinces them to try a screen test.  Of course, they do well enough that she decides to risk making the movie with them.

Like Aamir Khan playing DJ, the revolutionary Azad, and DJ playing Azad in Sue’s movie, the other three men also play multiple roles: Siddarth as Karan and Singh; Joshi as Sukhi and Rajguru; and Kapoor as Aslam and Khan.  Soha Ali Khan also plays dual roles as Sonia and a woman important to the revolutionaries.  That’s only four of the five male roles cast, though.  Sue decides to give Laxman Pandey (Atul Kulkarni) a try in the role of Ram Prasad Bismil.  This causes huge problems, though, because he and Aslam Khan hate each other.  Pandey also has strong anti-Muslim views, which don’t go over very well with the other young men.  Despite these differences, Sue casts him.  Clashes, both humorous and serious, ensue.

As the young men learn more about the historical figures they are portraying they start to see parallels in their own lives.  The current Indian government has much corruption in it.  Sonia’s fiancée is a jet fighter pilot who has to deal with a lot of wrongdoing from the Defence Minister.  The fiancée’s experiences start to fuel Sonia and the young men.  They decide to start protests against the government.  Things don’t go very well and they decide they really need to make a strong statement.  Their actions are heavily influenced by those of the historical revolutionaries they were portraying in Sue’s film.

Rang De Basanti was controversial in .  For obvious reasons the government wasn’t happy with it.  An increase in student activism in the months after its release was blamed on the film.  And the main characters in the movie will alternately be seen as either on the right side or on the wrong side depending on where your own opinions lie.  The film doesn’t shy away from presenting some very polarizing moral questions.  Are their actions justified?  You need to decide for yourself.

Aamir Khan gets to goof around a lot in the earlier section of the film, much as he did in 3 Idiots.  He looks like he’s having fun.  He originally didn’t want to take the part because he was turning 40, but the role of DJ was a man in his mid 20s (in order to match him with the revolutionary Azad, who was also in his mid 20s).  Khan was convinced to play the multiple characters after he read the script.  I think he did a good job with both the humor and the drama.

Bollywood films are known for two common characteristics: length and musical numbers.  In the case of this movie, it is only 2.5 hours long – short by Bollywood standards.  And while there are a few musical numbers they are more prevalent when the men are goofing off in the earlier part of the film, rather than big, stop everything and put on a huge performance kind of interruptions.  A. R. Rahman did the score for this film.  He previously did Slumdog Millionaire, 127 Hours, and many others.

Rang De Basanti won the Filmfare Award for Best Film – one of the two major movie awards in .  It was also nominated for a BAFTA, and was ’s choice for the 2007 Academy Awards, although it didn’t make the final ballot.  It probably wouldn’t have stood much of a chance anyway with both Pan’s Labyrinth and The Lives of Others (the eventual winner) as two of the nominees.

Rang De Basanti provides some laughs, although the humor isn’t really the reason to see it.  That’s provided by the drama and the parallel stories of the modern Indian men and the revolutionaries.  It presents the viewer with some tough moral questions, especially if you like the characters, but do not agree with their actions.  For all this reasons I highly recommend this film.