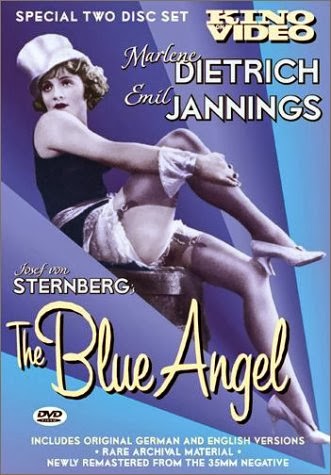 After the triumph that was 1928’s The Last Command, which helped garner Emil Jannings the first Best Actor Oscar in history, he and director Josef von Sternberg re-teamed for The Blue Angel.  Joining them this time around was an actress in her first major role who would go on to great fame in the 1930s – Marlene Dietrich.  Because this was the early days of sound the film was shot simultaneously in both German and English.  Because of the heavy accents of most of the performers the English version is considered the lesser of the two.  I watched the German version and that’s what I am reviewing and rating.


Professor Immanuel Rath (Jannings) is a proud man, respected in town as an eminent teacher.  His students don’t care much about his reputation and constantly are misbehaving when he is out of the classroom.  One day the boys have a postcard that they are looking at.  It features a picture of singer Lola Lola (Dietrich) in a revealing outfit.  Professor Rath gets angry at the boys and takes the card away from them.  The boys trip one of the students and a whole bunch of cards like this fall out of his schoolbooks.

The professor hears the boys talk about how Lola performs at The Blue Angel, a club in town.  They assure the professor they’ve never been there, though.  Rath decides to go confront the people running this club.  When he enters a whole bunch of his students scatter.  They try to hide from him, but all Rath sees is Lola performing on stage.  She captivates him.  Suddenly he does see a student and chases him until he ends up backstage with Lola.  She playfully starts changing costumes in front of Rath, including dropping her undergarments down to him.  This gives him an excuse to go back the next night, ostensibly to return them, but really to see her perform again.

Once again his students are there and have to hide.  They go down to a cellar and through the floorboards can see the professor’s reaction to Lola.  Suddenly the club is raided and the professor also needs a place to hide.  He ends up in the very same cellar with his students.  He can’t very well punish them, though, because he’s caught in the exact same situation.

Up until now the film has been a bit of a slapstick comedy. The students keep running around trying to avoid the professor, all the while leaving taunting drawings on his blackboard.  It’s when they draw once more on the blackboard all the events that happened in the club that things change.  The professor is ruined by this.  The headmaster of the school tells the professor to resign because he has shamed the school.  His reputation destroyed, he turns to the woman he has fallen in love/lust with.  At first she laughs in his face, but then apparently decides that it could be amusing to keep him around for a while.  The rest of the film is seeing the effect that Lola has on the former professor.  It’s very moving at times.

It’s never really explained why Lola does this, other than the same reason a cat toys with a mouse – it’s in her nature.  Dietrich plays Lola with a world-weariness that is much older than her years.  We are left with the impression that she gets amusement from seeing what she can do to Rath.  We are also given hints that she has done it before.

Reportedly, Dietrich only auditioned for the part because von Sternberg wanted her to.  She was bored, figuring she was wasting her time, but that kind of boredom and weariness was what von Sternberg was looking for.  Of course, the fact that the two of them were sleeping together at the time probably didn’t hurt her chances of being picked.  He would go on to cast her in six of her next seven films, too.  Regardless of how she got there, though, she showed she deserved to stay.

The Blue Angel features a fantastic performance from Emil Jannings, topped perhaps only in The Last Command.  And it features Marlene Dietrich in a star-making performance of her own.  She sings, she’s sexy, and she’s oh so dangerous.  There are some good laughs in the earlier part of the picture then the latter part has a very moving story.  It’s not a joyful one, though, once it turns serious.  If you need a happy movie then you may want to skip this one.  For everyone else, I highly recommend it.