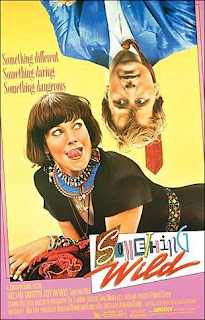 Something Wild holds a number of firsts for me.  It was the first movie in which I ever saw Jeff Daniels (Dumb & Dumber, ), Melanie Griffith (Working Girl), and Ray Liotta (Goodfellas).  It was the first film directed by Jonathan Demme (The Silence of the Lambs) that I ever saw.  The film contained songs from a number of bands that I was hearing for the first time.  I can’t be positive, since it was more than 25 years ago, but I believe that this film is the first one for which I ever bought the CD soundtrack.  I still own it.  I took it off the shelf and I’m listening to it as I write this.

This film was not always easy to find.  It did get issued on DVD in the early days of the medium, but that disk went out of print.  Thankfully, Criterion recently bought the rights to the film and released it on both DVD and Blu-ray.  They also added a bunch of new content.  Even though I own the original DVD, it doesn’t have those extras on it so I have thought about getting the Criterion edition.

The film opens with Charles Driggs (Daniels) having a Friday lunch in a restaurant in .  He is dressed well and appears to be an executive of some sort.  He gets the bill, but puts it in his pocket and leaves without paying.  A woman in the restaurant () notices this and follows him out.  She confronts him and he gets scared.  He’s just been promoted to Vice-President and if there’s any hint of him breaking the law he’s toast.  It turns out this woman, who introduces herself as Lulu, doesn’t work there and she’s just messing with him.  She then says she’ll make it up to him by giving him a ride back to the office.  He accepts.  Bad move.

Charles soon finds himself in a car going through the Holland Tunnel into .  Lulu tells him to stop being so uptight; he can take a Friday afternoon off.  She tells him she knows what kind of guy he is.  He’s a “closet rebel”.  She bets he takes a candy bar now and then, or steals a paper from a news stand.  He gets a little grin and confesses.  He calls it “rebelling within the system.”  He’s about a get a lesson in real rebellion.

Lulu stops to pick up some more liquor (she finished off the bottle she had with her while she was driving.)  Charles doesn’t run off now that the car is stopped, though.  He just calls the office from a payphone to check in.  Lulu comes back out, having taken the money in the cash register when the clerk was distracted, and she and Charles head back on the highway.  They end up crashing into a road sign and walk to a motel nearby.  She continues to mess with him by pulling out a set of handcuffs and showing them to him.  He’s a little scared, but he’s also a little excited.  He lets her handcuff him to the bed and she proceeds to have her way with him.  Just as she’s gotten him wound up, she stops and reaches for the phone.  Using his business card she calls his office and asks for his boss.  She sets the receiver near Charles’ head and proceeds to see if she can distract him by doing something to him just out of camera range.  Charles does some fast adlibbing with his boss.  When he gets done she looks at him impressed.  “You can lie really well when you need to, can’t you Charlie?”  Remember this.

She then explains that she’s going to this weekend for her ten year high school reunion.  She picked Charles because he looks like the kind of man her mother would like to see her with.  She asks him to pretend to be her husband for the weekend in front of her mother and then they can return to .  He agrees.  He’s a big hit with Mom, and the two decide to continue the charade at the reunion.

So far this might sound like a pretty standard romantic comedy, right?  You may be wondering why Criterion would release it.  Well, about 50 minutes into this film it takes a turn for the deadly serious.

At the reunion Lulu (now going by her real name of Audrey) runs into Ray Sinclair (Liotta) and his date Irene (Margaret Colin – Independence Day).  Audrey and Ray were an item back in high school.  Audrey immediately wants to leave.  She’s hiding something pretty serious from Charles – Ray was a criminal who went to prison for years.  He’s just out on parole and is very possessive of her.  Charles, being her husband as far as Ray knows, has something of his – Audrey.  We get slowly building menace from Ray as we wait for him to explode.  When he does things get bad for Charles.  He ends up with a broken nose and Audrey ends up in a car with Ray.  Both are lucky they didn’t end up dead.  Does Charles cut his losses and head home?  Does he try to go after Ray and rescue Audrey?  Does Audrey want or need to be “rescued”?  (It turns out it’s not just her who’s been lying to Charles; he’s got a pretty big secret of his own that he’s been lying about.)  If he does succeed, what will Ray do to him?

Liotta does a great job in the role of the guy who can be charming one minute and deadly dangerous the next minute.  His eyes really convey the menace.  I’ve been told that those same eyes can also be very attractive when he’s not being menacing.  Here's a couple of stills of him from the film.  You be the judge. 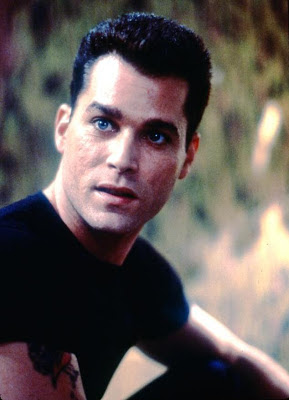 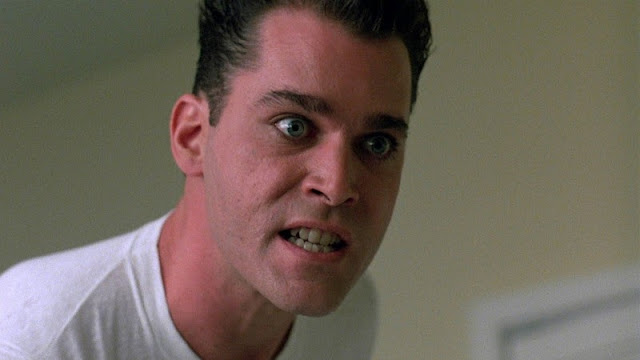 Daniels and Griffith play a bit to type in this film.  He’s in a suit for much of the movie and he looks a lot like he still does today, just younger.  goes through a few transformations in the film.  She’s the dark haired, sexily clothed woman keeping Charles just a little off-kilter, but when she gets home she’s a blond daughter in a nice dress.  Then when Ray gets involved she’s sort of a mix of the two.  Daniels, Griffith, and Liotta all received Golden Globe nominations for their performances.

I mentioned the music at the top.  Demme was coming off having directed the concert film Stop Making Sense with The Talking Heads.  Both David Byrne and Jerry Harrison contributed songs to the soundtrack of Something Wild.  In addition, Demme used a number of bands that would go on to be famous, such as Fine Young Cannibals, Timbuk3, Oingo Boingo, UB40, New Order, Big Audio Dynamite, X, The Feelies (who play the reunion cover band), and many others.  In addition, original music for the score was composed by John Cale and Laurie Anderson.  If those names mean nothing to you then you owe it to yourself to learn more about them.

Something Wild is a different kind of movie in that it changes genres halfway through.  It goes from being a romantic comedy to being a thriller.  It’s an early effort from Jonathan Demme, who would go on to do The Silence of the Lambs.  It’s got three early performances from Jeff Daniels, Melanie Griffith, and Ray Liotta.  And it’s got a fantastic soundtrack.  If any of these things sound interesting then I recommend you give this film a try.

Note: the video below contains the opening scene of the film where Charles and Lulu first meet.