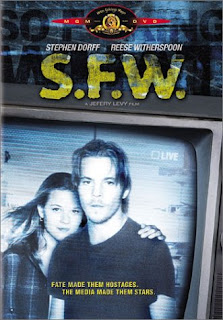 The title “S.F.W.” stands for “so fucking what”, the unintended catchphrase of the main character of the film.  Obviously the studios couldn’t put the full title on posters, in print ads, or in TV trailers, so they abbreviated it, much like the more recent Canadian film YPF (2007) where the first two letters stood for “young people”.  S.F.W is a biting satire on the media and instant celebrity, as well as anticipating the rise of “reality” shows.  For 1994 it was WAY ahead of its time.  While I would not compare it to 1976’s Network in terms of quality, the two are certainly twins in how the things in the movies that appeared to be insanely over the top when they came out have come true in the years since then.  S.F.W. is also the first film in which I ever saw Reese Witherspoon and Tobey Maguire.

When people think of those two stars together, they probably recall the film Pleasantville, which came out four years later.  (You can read my review of that here.)  They were co-stars in that movie.  Most people probably didn’t even realize they had been in the same film before.  That’s because while Witherspoon was the female lead in S.F.W., Maguire only had a single scene, which you can see below.  In four short years he would go from that to co-starring with her.

The setup for the events of this film is that Cliff Spab (Stephen Dorff) and his best friend Joe Dice (Jack Noseworthy) go into a convenience store and get taken hostage, along with three others, by a terrorist organization.  The terrorists film the reactions of the hostages to their plight and demand that the TV networks air the footage unedited every night.  At first the networks refuse, but after two of the five hostages are killed in retaliation, they relent.  The next 36 days are spent with the nation glued to their TVs watching hostages Spab, Joe, and Wendy Pfister (Witherspoon) react to their situation.  Eventually the three start to break down mentally.  Spab reaches a point where he doesn’t care if he lives or dies and his catchphrase of “so fucking what” is born.  He and Joe finally snap, attack the terrorists, and the result is that Joe ends up dead, Spab wounded, and Wendy okay, at least physically.  The film opens after these events have occurred.  We see some of them in flashback as the movie goes on.

Here’s the thing: Spab and Wendy had no idea that anyone was seeing them.  Spab is stunned to discover that he has become a national anti-hero to an entire generation of disaffected young adults.  Everyone is spouting his “so fucking what” line back to him wherever he goes.  In the meantime, Wendy’s mother puts her on TV, complete in flower print dress, in an attempt to make her out to be this perfect little young lady, not the distraught teenage girl from the videos.  It works.  Wendy now finds herself with an image that is not who she is.

Spab tries to ignore his fame and drop out of life with his brother Scott (David Barry Gray) and friend Morrow Streeter (Jake Busey).  That is impossible, though.  No matter where he goes it follows him.  He first tries to talk with Joe’s sister Monica (Joey Lauren Adams), but she is angry that everyone is celebrating Spab while her brother’s death is hardly a footnote in the whole thing.  He has already been forgotten by the public who want to celebrate all things Spab.

Morrow’s sister Janet, a lawyer, convinces Spab to cash in on his newfound fame.  Everyone else is making money off of him and his image, so why shouldn’t he make money, too?  He continues the glib “so fucking what” persona in these appearances, but the shell is starting to crack.  He survived a traumatic experience by putting up a wall, but the constant hounding by the media may be an even tougher thing to survive than being a hostage to terrorists.  He really wants to talk with Wendy, the only other person who can possibly understand how he feels, but her mother is keeping Spab far away from her.  He’s not the right element to fit into the image Wendy’s mother wants her daughter to have.

Wendy is just as trapped as Spab is, he in a wide open world with lots of hyenas after him, she in a closed in world of her mother’s making.  What happens when the two finally do manage to connect?  And what happens when someone gets fed up with Spab and his “message”?  Watch for a small, but important appearance by a pre-Buffy the Vampire Slayer Amber Benson.

S.F.W. is the kind of movie that divides people.  I can easily see someone just hating this film.  That was especially true at the time it came out.  Now that many of the things in it have come to pass, it might not seem so over the top to people anymore.  Another thing that might make people hate it is that Spab is not a very likable person for a sizable chunk of the movie.  He is still trying to maintain his shell to protect himself against everyone who wants a piece of him.  It’s only when that shell starts to crack that we see him as more of a human being.  You start to realize that he might be the only sane person in an otherwise insane world.  Dorff does a good job in the lead role.

Witherspoon is good in a role that requires her to play three different major types of character – a hostage, a perfect daughter, and a real teenage girl.  Most everyone else in the film is intentionally presented over the top, including Maguire’s appearance as a teenage stoner who idolizes Spab.

As prescient as it is, this movie is itself based on an earlier award-winning story by Andrew Wellman.  In the late 1980s Playboy Magazine launched its College Fiction Award.  Any unpublished writer who was enrolled in college could submit a piece of short fiction to them.  From the thousands of submissions, Wellman’s story S.F.W. was the very first winner.  He later expanded it into a 1991 novel.  This award has become among the most prestigious of its kind, with the winner receiving a cash prize and getting his/her story published in Playboy.

Just a side note – for those of you who are tee-heeing right now about “reading Playboy for the articles” I have a few of things to say.  First, grow up.  Second, for decades Playboy Magazine has been one of the very few publishers of shorter than novel length fiction.  This includes stories from the likes of Norman Mailer, Ian Fleming, Chuck Palahniuk, Stephen King, Amy Tan, Ray Bradbury, and hundreds of other names you would recognize.  Third, with all the free photos of beautiful women you could ever want just a few mouse clicks away, Playboy still has over 1.5 million subscribers.  I am one of them, and have been ever since 1986.  I remember reading the original short story that was the basis for this movie and being very impressed with it.

One other note – the music in the film is almost a who’s who of early 90s alternative rock, from Soundgarden and Hole to Marilyn Manson and Radiohead.  Spab is a huge fan of GWAR and they appear in a cameo in the movie.

If you are thinking about seeing S.F.W. because of the terrorist angle, then don’t bother.  It’s not about that part of the story.  Their actions are just a device to drive everything that happens afterwards.  No, this film is about how such an event would affect an entire nation, and the individuals at the center of the media storm.  As I said at the top, it’s a satire on the entire media culture that later became a much more central part of the entertainment industry.  If this film sounds interesting then I recommend you give it a try.

Note: the first video below shows Witherspoon’s and Dorff’s characters talking about their experience.  The second video is Maguire’s entire appearance in the film.  He’s the one in the white shirt.  These two videos are quite different and will give you a taste of the range of what you would see if you watched the movie.