I Completed the Entire 1,001 Movies You Must See Before You Die List 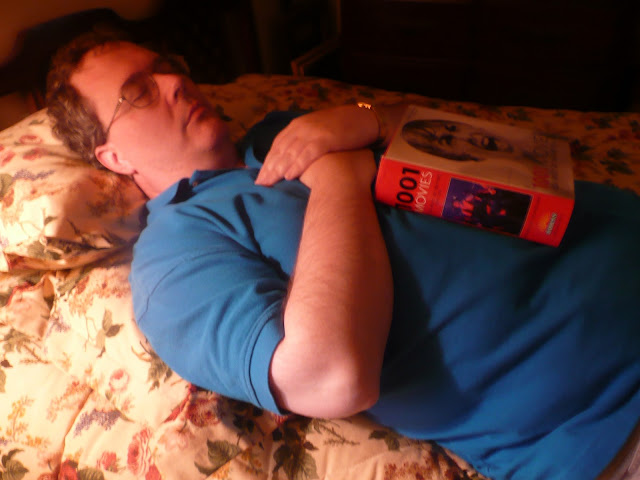 I thought about paraphrasing Dr. Martin Luther King, Jr. – “Free at last!  Free at last!  Thank God Almighty I am free at last!” but I figured some people might be upset by me using the closing of one of the greatest speeches of all time for something as relatively trivial as my completion of a list of movies.

Do I feel a tremendous sense of accomplishment?  I wish I could tell all of you still working on this endeavor that the answer is a resounding “yes”, but it’s not.  Frankly, I’m just glad it’s over.  Quoting Jon Krakauer from his book Into Thin Air: “I’d been fantasizing about this moment, and the release of emotion that would accompany it, for many months.  But now that I was finally here, actually standing on the summit of , I just couldn’t summon the energy to care.”  For me, my state of mind is more akin to College Finals being over – burnt out and a little numb; happy to a certain extent, but probably not yet in a state of mind to really appreciate it.

Of course, I invested less time on this than most of you reading this post.  When I started to actively work on the list 17 months ago I was already almost halfway complete just from my prior movie watching.  Had I been at it for years I’m sure I would feel more emotion.  In addition, and I honestly think this makes a BIG difference, I am not reviewing every single entry like most of you are doing.  Writing more than a thousand reviews would definitely be something that would make me feel like I accomplished a lot more.  Also, this is not the first list I have ever completed, nor is it even the second.  It is the most “critic biased” list I have done, though.  The others I have completed have had a larger percentage of mainstream movies on them.

Do I regret having done the entire list?  Not at all.  I’m a lists kind of guy anyway, as evidenced by my having done others, and I’ve enjoyed being able to share thoughts with some of you on your sites as you also work on the list.  While I did see a bunch of movies that I wouldn’t ever recommend to anyone – a few not even to someone I hated – I also saw some very good ones that I never would have watched were it not for this endeavor (see below).

Here Is My Timeline:

2003 – I bought the first edition and checked off about 300 titles that I had then seen.
2003 - 2011 – A few times a year I checked off additional ones I had happened to see.
Around January, 2012 – the 1,001 Movies You Must See Before You Die Blog Club is brought to my attention by Michael Parent at Le Mot du Cinephiliaque.  I learn that there have been subsequent book editions and that dozens more movies have been added.
Feb 7, 2012 – I did my first 1,001 Movies related post.  It was on the book that started it all, as well as the Blog Club.  If you’d like to know more about either, please click on the link.
Mid February, 2012 – I decided to actively work on the list.  At this point I had seen 520 of the 1089.
March - May, 2012 – I actively sought out hard to find titles and then shared them with those bloggers who mentioned they were looking for ones I had tracked down.
May 11, 2012 – Launched my Lists from Chip site to share downloadable tracking sheets for dozens of different movie lists, including the 1,001 Movies.
June, 2012 – After discussions with Steve Honeywell at 1001plus and Adolytsi from Adol’s CinematoBlogoWebboScreed on having a common location for places to get the hard to find entries, a wiki dedicated to the 1,001 Movies was started by Adolytsi and then greatly expanded by Adolytsi and me.
July, 2012 – passed 600 entries seen
July - September, 2012 – Tracked down all the other editions of the book published since the first in order to answer lingering questions on what had and had not been added/removed and when those changes were made.  Created a Books section on the 1,001 Movies wiki to present this information. 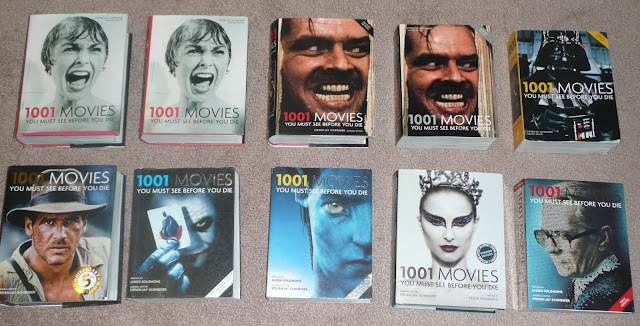 It’s impossible for me to name absolute bests and absolute worsts from a list this large.  The big films you most often hear named would likely be the best, and you can’t go wrong with The Princess Bride (1987).  If you are interested in seeing the list of my 42 five star movies, let me know.

Among the worst, most anything labeled “Experimental” would apply for me.  Vinyl (1965) readily comes to mind.  In addition, some of the extremely long entries are like slogging through 100 miles of mud on your hands and knees.  Jeanne Dielman, 23 Quai du Commerce, 1080 Bruxelles (1975) and Satantango (1994) – all seven hours, fifteen minutes of it – come to mind.  I recommend making judicial use of the Fast Forward button for these.

Thirty Best Discoveries from Doing the Entire List – These are the films that I would probably never have watched, or in some cases would never even have heard of, were it not for actively completing the list.  I had already seen almost all of the great films that also happened to be on this list, so finding something to add to those was a rare occasion.  All of these are four out of five star films, except where noted.

18 I never heard of or would never have watched:

Another 12 I had heard of, but may or may not have watched:

Discussions of what should be added or dropped can be found in my post on the 2013 edition.

Many Movies Refer to Other Movies

I noticed way too late that a lot of entries refer to other entries in the book, either by explicitly mentioning them, by showing them on a movie or TV screen, or in some cases by re-creating or spoofing scenes from those other films.  I wish I had been taking notes from the beginning because it would be interesting to track how many of the movies in the list do this and which ones get referred to the most.

I’m not going to abandon either the 1,001 Movies wiki or helping others find obscure titles.  I will pick up the 10th anniversary edition and update the tracking list and wiki.  I may need to discuss a new numbering system with the major players at that time, depending on how much the book is altered.  We will see.  And of course there will be some new entries in this edition that I will not have seen.

In regards to movie lists, I am still working on the Oscar Best Picture Nominees list.  I’m more than 86% complete on that, with 69 movies left.  After that I have another Oscar list I built with all the winners of every directing and acting category.  Since these winners do not necessarily come from a Best Picture nominee this gives a different spread of films from any given year.  I’ve seen 271 of the 341 films that have had an Oscar winning performance in them, which leaves 70 to go.  Further down the line there are also the Golden Globe winning films, as well as the Oscar Best Foreign Film and Best Documentary winners I could do.  All of these tracking lists can be found here.

I may not work on any new lists for a while.  I might just take the radical direction of watching only the movies I want to watch, when I want to watch them. I used to re-watch movies a lot more often.  And if I stop seeing so many movies every month I might have time to go back to commenting on all the blogs I follow instead of the relatively few I have been doing the last several months.  I used to spend 6-8 hours some days on other blogs before I had to cut way, way back.

All the tracking lists mentioned in the last two paragraphs can be found here.

There are other lists related to the 1,001 Movies.  There is a Danish/Swedish edition of the book that swaps out 17 entries for ones specific to those two countries.  I’ve only seen two of the seventeen (My Life as a Dog and Fucking Amal), leaving fifteen to complete them.  I don’t know how readily available they will be in the , though.

There are also six different 101 [genre] Movies You Must See Before You Die books put out by the same editors as the larger 1,001 Movies books.  Those genres are Action, Cult, Gangster, Horror, Sci-Fi, and War.  There is some crossover with the main list, but among the combined 607 entries (Action has 102), 348 are unique.  Of those I have seen one more than half – 175.  Of the remaining, I have already tracked down all but five of the ones I need to see.  I might also just do the genres I am more interested in, such as Sci-Fi (20 unseen) and Action (17 unseen), and maybe leave the rest for another time.  All of these lists can be seen here.

Perhaps you were expecting me to mention the They Shoot Pictures Don’t They list.  That is probably the other really well known large movie list.  After completing the 1,001 Movies I find that I’m not that thrilled to tackle another list that is even more heavily weighted to movies only critics can love, and from relatively few directors.  As it stands right now I have seen 688 of the 1,000 in the 2013 list.  I’ve seen 850 of the 1,395 that have ever been on a TSPDT list.  It would be larger endeavors to knock those off, so I don’t see myself working on them anytime soon.  I might knock off the highest ranked ones I have remaining, though.  I’m only missing one film from the Top 100 (1949’s Late Spring) and eleven from the Top 250.

No, when it comes to larger lists that I might tackle I’ve got the New York Times Top 1,000 Movies list.  This seems to have slightly more mainstream films on it.  I’ve seen exactly 666 from this list.  [Feel free to make your best Number of the Beast jokes.]  Right now I feel I’d be more likely to spend time on that than the TSPDT list.

Before either of those, though, I am very intrigued by the 600 films that have been chosen to be permanently preserved by the United States’ Library of Congress’ National Film Registry.  Up to 25 new entries can be added each year, but they have to be at least ten years old.  They should also be “culturally, historically, or aesthetically significant” to the .  This list includes 409 Narrative Features, 80 Documentaries, 113 Shorts, and assorted other entries from News Reels, Serials, and other forms of video.  I’ve seen only 349 of these 600, leaving almost half to go.  I don’t know how many of these I will be able to locate, but I think it would be interesting to find out.  Especially interesting to me are the 50 pre-1920 entries, including 6 that are pre-1900.

Anyway, to those of you who read this entire post, I’d like to say thanks for sticking with it all the way.  That’s almost as big an accomplishment as mine.  I’ve had a lot of thoughts while I’ve been working through the list and I wanted to share the ones that seemed most relevant.  (Believe it or not, I left out some.)  If you are interested to see what films from the 1,001 Movies list that I have recommended so far you can click on the “Movies – 1,001 Movies” tag at the bottom of this post.
Posted by Chip Lary at 3:28 PM