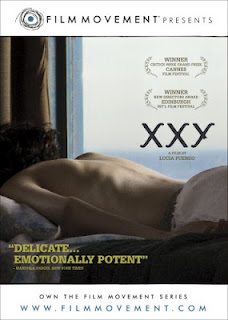 XXY was ’s entry for the Best Foreign Language Film Oscar in 2008, although it didn’t make it to the final nominations.  It did win its home country’s Silver Condor (Best Picture), as well as ’s Goya (Best Foreign Film), and a host of other countries’ and festivals' Best Picture awards.  I say all of this because I had never heard of this film until it showed up as a “new to DVD” movie in Netflix.  Luckily I decided to watch it and discovered a great performance from a young actress named Ines Efron.

She plays Alex, a 15 year old “true hermaphrodite” – someone who has both male and female genitals.  For the last few decades when a child has been born with what doctors term “ambiguous genitalia” surgery was usually performed to “correct” this situation.  Recently there has been some change of mind on this practice, saying that there is no way that parents would be able to tell what gender their child will identify with when they grow up, so therefore this surgery is wrong.  (A lot more can be found on this real topic here.)  Alex’s parents decide to wait to have the surgery done.

Alex’s parents are Argentinean, but have moved to to a village by the sea.  This is because Alex’s father Nestor (Ricardo Darin) is a marine biologist, but also to be in a place where no one knows about Alex.  This isn’t because they are ashamed of her, but rather to protect her from people who will either treat her badly, or assume wrong things about her.

Alex is outwardly a young female, but this has been accomplished through the use of hormone medication to suppress her secondary male attributes (i.e. starting to grow a beard.)  Unbeknownst to her parents, though, Alex has recently stopped taking her medication.  She is not as certain as her parents that she identifies wholly as a girl.

It was really the father that wanted to put off Alex’s surgery until she could make a decision for herself.  Alex’s mother Suli (Valeria Bertuccelli) would have preferred to have had it done back when Alex was born, but acquiesced to her husband’s wishes.  In the present she invites a family she knows from to come visit them.  The father is a surgeon and the real reason Suli invited him is to discuss surgery for Alex now.  Neither Alex nor Nestor is aware of this.

That family brings with them a teenage son named Alvaro (Martin Piroyansky).  He and Alex become friends.  They are both curious about sex and Alvaro may be in for a surprise.  Meanwhile, Nestor finds out what his wife’s agenda is and this causes friction.  He decides to take Alex to meet an intersex person who had recently written a book on his experiences.  He was in a similar situation as Alex where he was raised as a girl, but found himself starting to identify more as male when he hit his teens.

Things come to a head when all these various secrets about Alex, her parents, and Alvaro come out into the open.

I mentioned at the top that Ines Efron really impressed me with her performance.  She won several Best Actress awards for her effort in this film.  It would have been easy for a young woman to just play the role of someone who’s both male and female as simply a “butch” girl, or to be overly feminine one minute then overly masculine the next.  Efron doesn’t do that.  She really accomplishes a nice blend of attributes.  Perhaps the best way to describe the character of Alex is “kind of a tomboy”.

This movie will push a lot of buttons for some people.  In addition to the main plot about being intersex, there are also scenes that could be interpreted as homosexual by some, and there is a scene where Alex’s teenage female friend, when asked by Alex if she’s ever had sex, shyly confesses that her cousin “made her do it” the first time, but now she likes doing it with him.  This isn’t a movie to watch if you are easily offended about sexual issues.

Overall, the movie does a good job of presenting a situation that I wasn’t even really aware of.  It treats it with respect, but doesn’t go overboard on sentimentality.  The real reason to see it, for me, is Efron’s performance in the film.  Unless you feel you will be offended by this topic, then I recommend you give this film a try.