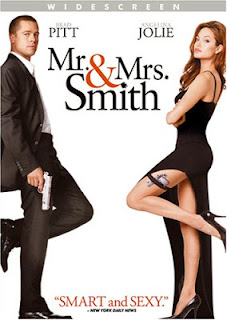 In the seven years since the film Mr. & Mrs. Smith came out, it has become best remembered as the one Angelina Jolie and Brad Pitt were in together before they broke up their respective relationships to start dating.  This is unfortunate because it is an entertaining film that should be remembered for what is on the screen, not for what happened after it was released.  So what is on the screen?  A good combination of action and comedy, with the added bonus of some great chemistry between two of the most sexually appealing people on the planet.

I make that last statement not from any understanding of why Brad Pitt is so appealing, but from the fact that many, many women have said that is the case, so I accept it as true.  For whatever reason, I have a complete lack of ability when it comes to judging a man’s attractiveness, and sometimes I am bewildered by those men who do get mentioned as being hot (Robert Pattinson?  Really?)  Contrast this with the fact that many, many women also list Angelina Jolie as very sexy, so for whatever reason they do not have a similar blind spot when it comes to their own gender.

The result of both Pitt and Jolie being in this film is that this was an action movie that was not destined to appeal just to guys, but also to large numbers of women.  In fact, across all demographics that have voted on IMDB (175,000+ people) women rate this action movie the same, or even higher, than the men have.

You have to make a pretty big leap right at the beginning of the movie when we are shown Pitt and Jolie as a married couple who have lost interest in each other and that are living a boring marriage.  The filmmakers even had doubts about casting Jolie at first because they knew she could do sexy, but they didn’t know if she could do boring.  Director Doug Liman (The Bourne Identity) deliberately shot all the marriage counseling scenes right at the beginning when Jolie and Pitt were themselves still kind of awkward around each other and this comes through well in the finished product.

Unbeknownst to both John Smith (Pitt) and Jane Smith (Jolie) they are both assassins for hire.  They met when one had just completed an assignment to take out the dictator of a foreign country and they had to lie low.  Fast forward to "five or six" years later and things have gone stale.  Each lives a secret life separate from the other, disguised by business trips or visits to friends.  Things start to come to light when each is given the same target.

At first they are both stunned, and don’t know if they can trust the other.  They then realize that they have to take out the other one before they get taken out themselves.  John’s second in command (Vince Vaughn) tries to help him some, but things start to get too big.  The two Smiths finally have it out in a knock down, drag out, destroy the whole house fight that is as funny as the action is great.  The aftermath is also one of the sexiest moments in the film because what’s the best sex?  Make up sex, of course.  And these two have a lot to make up for to each other.  Unfortunately, much of the scene had to be cut so that the censors at the MPAA would deign to give the film a PG-13 rating.  (Thousands of bullets being fired and dozens of people being killed?  Perfectly fine for kids.  Two people in love acting like two people in love?  Bad bad bad for kids.)

The Smiths decide that they have to pool resources and figure out who set them up against each other.  They kidnap a young man (Adam Brody) and they finally find out just what the heck is going on.  This leads to the finale of the film which has a whole lot of bullets, and almost as many lines, fired off.

The funny chase sequence comes after the two have reconciled and are trying to get away from some folks.  The Smiths are in a minivan, with Jane driving and John trying to pick off the bad guys.  While all of this is happening – Jane dodging cars, doing 90 degree turns, etc. and John opening the back doors of the van, trying not to fall out, trying to shoot the bad guys, etc. – they are verbally fighting back and forth about all the things they’ve lied to each other about.  For instance, Jane is an orphan; the two people at her wedding who she said were her parents were actors.  John’s response, “I told you I thought I had seen your father on .  I can’t believe I brought my real parents to our wedding.”  (Jane dodges a car; John falls over while firing at some bad guys.)  This scene goes on for a while, with the action almost secondary to all the secrets getting revealed by each other and their funny reactions to them.

There are some great stunts in the film and some are performed by the actors themselves.  For instance, that’s really Angelina Jolie doing a controlled two hundred foot descent on a line to the sidewalk and then stepping into a car, all in one shot.

One other note: watch for several now-familiar faces among the smaller female roles in the film, including Michelle Monaghan and Jennifer Morrison.  And listen for a couple of familiar voices for the marriage counselor (William Fitchner) and Mr. Smith’s boss (Angela Bassett).

If you don’t like action comedies then this is not the movie for you.  If you do like them, or if you are just curious to see how good the chemistry really was between Jolie and Pitt, then I highly recommend this film.