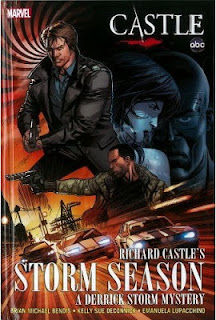 Unlike the Nikki Heat books, whose author remains a mystery, these graphic novels are written by Brian Michael Bendis – a much respected writer in the comics world.  At 112 pages these graphic novels are actually quite thick by the standards of the industry.  The first to be adapted was Deadly Storm, which introduced the Derrick Storm character and how he came to work part-time for the CIA.  You can read my review of that book here.

Like the first book, Storm Season has additional pages of artwork, as well as synopses of all of Richard Castle’s books.  There is also an introduction where “Richard Castle” writes about his discovery of James Bond as a child.

When Storm Season opens, some months have passed since the events of Deadly Storm.  Derrick Storm is now a high-profile private investigator, making the gossip pages for who he may be dating.  He’s on a missing person’s assignment when he sees a ghost – CIA agent Clara Strike.  Unfortunately, it’s when she hits him with her car while he’s pursuing someone, so he can’t be sure he actually saw her.

While this has given him a whole other set of things to think about, his case is also getting stranger.  The more he follows it, the more it keeps getting bigger.  It even appears like it may involve human trafficking from the highest levels of a foreign government.  And who better to tap for resources on this than the CIA?

The writing on Storm Season is just as entertaining as the first novel.  There’s a good combination of overall story and little humorous moments here and there.  There is a different artist this time on Storm Season.  She appears to have a background in superhero comics because her men are all square-jawed and heroic and her women are all babe-alicious.  It doesn’t look cartoonish, though.

All in all, this is a good expansion of the character and his continuing adventures.  It shows that not everything will necessarily be a CIA assignment, but rather might stem from Storm’s own investigations.  This gives more flexibility for future stories.  According to the synopses there are eleven Derrick Storm novels in all, so we may see nine more of these graphic novels.  If they are as entertaining as the first two, then I look forward to them.