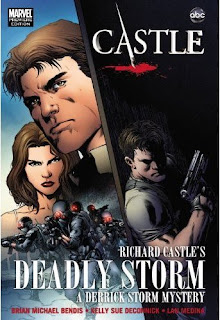 Unlike the Nikki Heat books, whose author remains a mystery, this graphic novel was written by Brian Michael Bendis – a much respected writer in the comics world.  At 112 pages this graphic novel is actually quite thick by the standards of the industry.  In addition to the main story, the book also contains a forward by “Richard Castle”, and part one of a short autobiography of Richard Castle.

There are also synopses of all the Derrick Storm novels that Castle has written.  When this graphic novel came out I was wondering if it would be a one-shot or if they would continue these “adaptations”.  I have my answer because the second one – Richard Castle’s Storm Season – is coming out in about a month.

Unlike the first Nikki Heat novel, which I ran across in a book store, I knew nothing about this Derrick Storm graphic novel until it was mentioned on the TV show.  Castle and Beckett go to a comic shop as part of an investigation and they have the new graphic novel on display.

So who is Derrick Storm?  He is a private investigator turned CIA agent.  He appeared in an eleven book series by Richard Castle.  Deadly Storm is the first of the books and it introduces the character, and shows how he ended up working with the CIA.

He is tracking down a missing person and he receives a visit from CIA agent Clara Strike.  The person he is seeking turns out to be a rogue CIA agent.  Because the CIA is forbidden to operate on American soil (that’s the FBI’s job) Strike sees Storm as a way to still go after the guy while tiptoeing around the law.

The more Storm finds out, though, the more he begins to wonder if he still doesn’t know what is really going on.  The trail leads to and involves not only the rogue agent, but Strike, too.  And she’s acting like she might be just a little rogue herself.  What has she gotten Storm into?

The artwork is well done.  It is clean and crisp.  The artist also had the advantage of not having to make the characters look like a real person, which is one of the drawbacks of illustrating graphic novels like the Buffy Season 8 and Season 9 comics.

All in all, this was a good introduction to the character and his first adventure with the CIA.  And because the graphic novel was thicker than I was expecting, it was able to pack a sizable amount of story into it, too.  If this sounds interesting, then I suggest you give this book a read.