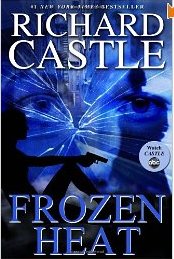 Frozen Heat is the fourth book by “Richard Castle”, the fictional writer on the TV show Castle.  The actual author of these books is speculated to be one of the real authors who have appeared on the show (i.e. Michael Connelly, James Patterson) or one of the show’s creators (i.e. Andrew Marlowe).  Like the first three books, this one has events or plot points similar to things that have happened on the Castle TV show in the prior season.  This book tackles the equivalent of the big issue from the TV show – the murder of Nikki Heat’s mother.

While this book picks up a few months after the last one left off, it can be read on its own.  The author re-introduces the characters at the beginning, just as most serial detective novels do.  When this book opens Jameson Rook (the Richard Castle analogue) is recovering from the events of the third book.

One note about the timeline: much like Sue Grafton has done with her alphabet series, which is still set in the 1980s when the first book came out, the Nikki Heat series is now falling behind the present.  Because the books have come out once a year for four years, but all four books have taken place over about twelve months, the author has fun with the Rook character talking about wanting to get this hot new product – an iPad – because he likes toys.

The mystery starts with Heat going to the scene of a murder.  A woman’s body was stuffed in a suitcase and left in a truck.  Heat almost freaks out when she sees the letters “NH” carved into the bottom the suitcase.  This is the exact same suitcase that was stolen the night her mother was murdered.  Nikki is the one who carved those initials into the suitcase when she was little.

Heat immediately starts two murder boards – one for the current murder and one for her mother’s cold case.  Most of the detectives that showed up in the third book reappear in this one to help her.  The new Captain – a career bureaucrat who never walked a beat – doesn’t support her.  He feels that she should concentrate only on the new case.  They have words and he ends up suspending Heat.

This book is the best of the first four.  It has the most cohesive and most moving story so far.  It does a great job with all the revelations about Heat’s mother, both by having them be quite different from the show’s revelations, but still having them tie into some other key events in season 4.  Much like the show, this book answers some major questions about Heat’s mother’s murder, while still retaining the possibility of returning to the story at a later point.

Frozen Heat had some fun references for people, including ones that are outside both book and show.  For instance, two new detectives are introduced – Detective Malcolm and Detective Reynolds.  I believe it was this book (although it might have been the third one) that had someone tell Nikki Heat that she would make a good Bond girl.  Stana Katic, who plays Detective Beckett on the TV show, had a small role in the Bond movie Quantum of Solace as a Canadian agent.

The dedication of this book will be recognized by anyone who saw the TV show’s season 4 finale.

If you liked the first three books, and especially the third one, then I definitely recommend this one.  This is really becoming quite a good mystery series.