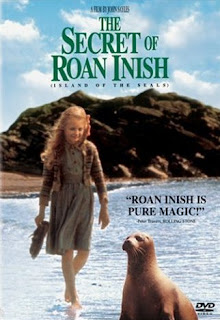 The movie The Secret of Roan Inish uses the Celtic myth of selkies as a central part of its tale.  It is based on the out of print book The Secret of Ron Mor Skerry by Rosalie K. Fry.  John Sayles (Matewan, Eight Men Out, Lone Star) adapted and directed the film.  He shifted the location to western and changed the name to Roan Inish (Gaelic for
).  The result is a quite magical movie that can be enjoyed by most anyone.  It may or may not be a little slow for children, but adults will certainly appreciate it.  All ages will like the tales that are told.

So what are selkies?  Some people confuse them with mermaids, but they are not the same.  Mermaids are half woman and half fish.  Selkies are seals who have shed their skin and become a human woman.  The tales go that if a fisherman can find a selkie sunning herself with her skin shed, he can capture her.  She is his as long as he can keep her seal skin hidden from her.  Much more on selkies can be found here.

Ten year old Fiona Coneelly (Jeni Courtney) is sent by her father from their home in to live with her grandparents in a small village on the coast of .  It is right after World War II has ended.  Just off the coast is the where Fiona’s ancestors lived for many generations.  The Coneellys had to abandon the island during World War II.  Her grandparents still long for their old home, but everything has fallen into disrepair.

Fiona starts to be told her family’s history by her grandfather.  The first tale is how her baby brother Jamie was lost when the family had to abandon the island.  His cradle was swept out to sea.  Fiona also starts to hear about certain members of the family that are/were a little “different”.  Every generation would have one member that had dark hair and eyes, and that had a special affinity for the sea.    Fiona searches out her adult cousin Tadgh Coneelly, played by John Lynch (In the Name of the Father).  At first he is reluctant to say anything, but he finally tells her the tale of how their ancestor captured a selkie (Waking Ned Devine’s Susan Lynch, who is a sister to John in real life, so it was good casting for the familial relationship).  This ancestor took the now human woman to wife.

They had many children and lived together on Roan Inish for many years, but one day she found her skin where it had been hidden and left her husband and children behind to return to her first love – the sea.  It’s her heritage that comes out in at least one child every generation.

Flush with all these stories, Fiona wants to visit Roan Inish.  She convinces her slightly older cousin Eamon Coneelly (Richard Sheridan) to row her over there.  They find the old home of their family.  Fiona sees something even more exciting – a young boy picking flowers.  When she calls to him he runs to the shore, climbs into a tiny boat that looks like a cradle, and is carried off to sea by seals.  She is convinced this is her little brother Jamie lost years before, who has been saved and raised by the seals because of her family’s connection to them.  Of course, when she tells her grandparents what she saw they do not believe her.  They think all the tales she has been hearing have fired up her imagination a little too much.

Fiona decides that the way to get Jamie back is to fix up the old home on Roan Inish.  She and Eamon spend a lot of time out there doing that in secret.  Aside from adults, it’s a great story for kids because it shows what someone their own age can accomplish, instead of just sitting around.  While this is going on, the grandparents have found out they might be evicted from where they are living.  It was already bad enough they had to move off Roan Inish to the mainland, but to have to move away from the sea entirely might permanently break the last connection the family has with it.  I think you can figure out where the movie goes from there.

I love tales, especially ones about families, so I liked this movie quite a bit.  Reasonably often I can anticipate how a movie is going to end and I had a scenario that I thought was going to wrap this film up.  I was so certain of this that when the movie ended without it, I was actually disappointed, even though it had only existed in my head.  The film was set in the 1940s and the lead was a little girl who had many older members telling her tales of her family.  The movie was made in 1994, almost 50 years after the time the movie takes place.  I was sure it would end in the present with Fiona, now a grandmother, saying to a group of wide-eyed grandchildren sitting in front of her, “…and that’s how the Coneellys returned to Roan Inish.”  It would have been the perfect bow on the gift that was this movie.

Again, this was all in my head, so not having this scene is not a negative for the film.  Just about everything about the movie is well done.  The cinematography on this film is quite special.  If you like the sea, the shore, seals, birds, etc. then you will love the beautiful images in this film.  This isn't a cutesy movie, either.  There are no trained seals doing things you'd see at an aquarium show.  Unless you need a fast paced kind of story, I highly recommend this film.

(Coming next, and wrapping up the Fairytales for Adults category - the only other movie I know of about Selkies.)