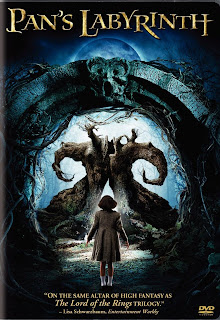 Pan’s Labyrinth was a revelation for me.  Sure writer/director Guillermo del Toro’s Hellboy movies were fun, and Mimic was effectively creepy, but nothing I had seen had indicated he had a movie in him with this much depth of story and feeling.  It was nominated for a Best Foreign Language Film Oscar, losing to The Lives of Others.  Pan’s Labyrinth is one of the very few films that have managed to combine drama with fantasy elements and have them feel like they belonged together.  It is easily del Toro’s best work to date.

The movie is set in a few years after the Spanish Civil War and the rise to power of Francisco Franco – in other words, the mid 1940s.  The film is a Mexican production that stars a mixture of Spanish and Mexican actors/actresses.  It does have one American – Doug Jones (Hellboy) – who plays a couple of the fantasy creatures.

The film opens with a fairy tale being told.  A Princess from an underground realm was curious about life above, so she went to see it.  Unfortunately, she was blinded by the sun, lost her memory, and died.  Her father believes that the Princess will be reborn someday and will return to him.

We meet Ofelia (Ivana Baquero), a girl just short of her teens.  Her father died during the war.  Her mother Carmen (Ariadna Gil) has re-married a Spanish military officer named Vidal (Sergi Lopez), who has brought them all to an outpost.  Vidal is charged with rooting out rebels that are operating out of the nearby forest.  He is a cruel man, but Carmen ignores this.  She is heavily pregnant with his child.

Ofelia has a huge imagination.  She wanders the woods and finds an entrance to an old labyrinth.  A local housekeeper (Maribel Verdu – Y Tu Mama Tambien) finds her and warns her that the labyrinth is a dangerous place and she must stay away from it.  This, of course, makes it absolutely fascinating to Ofelia.  That night an insect visits her.  It changes into a fairy that wants Ofelia to follow it into the labyrinth.  She does.  At the center she finds a large faun-like creature who tells her the story of the lost Princess and that Ofelia is that girl.  In order to return to her father she must complete three tasks to show that she is worthy.

The first involves stopping a giant toad that lives in a tree.  While doing this Ofelia ruins the new outfit her mother bought her and both her mother and stepfather are very angry with her.  That night Carmen starts hemorrhaging from the pregnancy and it does not look good for her.  Vidal, lacking most human compassion, tells the doctor that if it comes down to it, he should cut the baby out of the mother and let her die.  Ofelia hears this.

The faun comes to see Ofelia and tells her that she is supposed to be doing her second task.  She lets him know about her mother.  He gives Ofelia a mandrake root.  It must be placed under her mother’s bed, in a bowl of milk, and fed a few drops of Ofelia’s blood every day.  Ofelia does this and her mother starts to improve.  Ofelia then completes the second task, but does not follow the faun’s instructions while doing it.  Some fairies die because of it and the faun is quite angry with her.  He tells her she will never be allowed to re-enter her father’s realm.  To make matters worse, her mother has found out about the mandrake root and has thrown it in to the fire to show Ofelia that she is letting her imagination get the better of her.

Meanwhile, we have seen some of the examples of how Vidal deals with others.  A father and son were found hunting rabbits in the woods.  Vidal accuses them of being rebels and brutally kills the father with a bottle and then shoots the son when he protests.  This scene, combined with a later one where Vidal has to sew up his own cheek, are ones that may make you uncomfortable if you are squeamish.  The film does earn its R rating for the violence in it.

Vidal captures another rebel and tortures him to get him to talk.  He orders the doctor to revive him, but the doctor gives the man a lethal dose of morphine to put him out of his misery.  To Vidal this is a clear indication that the doctor is with the rebels and he kills him.  There is now no one to look after Ofelia’s mother.  The baby is born, but with bad consequences for the mother.

Ofelia is then visited by the faun again.  He has relented and will let her try to complete the third and final task.  She must bring her infant brother to the center of the labyrinth.  To do this she will have to sneak into Vidal’s room and then get away with the baby without waking him, all the while avoiding all of the soldiers, too.  The only reason she is still alive is probably because Vidal is too preoccupied with his new son to give her a single thought.  If Vidal catches her trying to steal his child, she will most definitely be killed.  Even if she does manage this, the faun has not told her the whole story about the task she must perform.

The ending of the film is very bittersweet.  It is also open for interpretation.  How you feel things end up depends entirely on whether you believe that the fantasy sequences we have seen were real, or if they were all in Ofelia’s active imagination.  Either way, the ending is very moving.

I have a request for commenters – if you want to let us know what you felt happened at the end, either please do it in generic terms such as “it was all in her head” or “it was real”, or by placing a big spoiler warning prior to your words.  As for myself, I would like to believe it was real, but a part of me feels that it was not.

One thing that I was surprised about with this film is that the fantasy elements are actually only a small part of the overall movie.  The trailer had given the impression that it was mostly fantasy.  In fact, much more time is spent with Ofelia, her mother, Vidal, and the housekeeper in the real world.  I would estimate the fantasy sections are no more than 20-30 minutes of the overall two hour running time.

The centerpiece of this film is young Ofelia.  Ivana Baquero really gives a great performance.  I’ve read that del Toro originally envisioned a younger character, but that Baquero impressed him so much when she auditioned that he decided to age the character up a few years just so he could use her.  Sergi Lopez does a great job at being evil.  You will definitely hate his character and truly fear for Ofelia’s safety around him.  Maribel Verdu gives a strong supporting performance as the housekeeper with secrets of her own.

Unless you are allergic to subtitles there’s not much reason to avoid this movie.  Yes, the two specific scenes of violence I mentioned may be hard for some to take, but you can look away as they are about to happen.  I highly recommend this film.