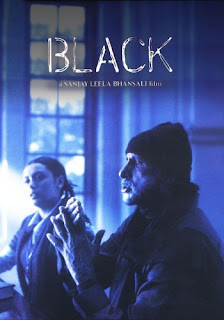 Black is an Indian film that would not have come to my attention at all were it not for a man from recommending it to me.  It also served as an introduction to the wealth of foreign films that Netflix carried, but that is another story.  This man had rented the DVD via Netflix, but before returning it he loaned it to me.  He knew I was always looking for good movies and he felt this one qualified.  He was right.  This is a great movie.
The first part of the film is a remake of The Miracle Worker (1962), but with a male teacher.  If you are not familiar with the film, it is the story of Helen Keller, a woman who was deaf, blind, and mute.  A teacher lifted her out of her silent, violent world, and Keller became a very successful communicator and inspiring person.  The Miracle Worker ends with Keller as a child.  Black asks the question, “What happens next?”  They answer that in the second part of the movie.
The film opens with the adult Michelle McNally (Rani Mukerji) going to visit her elderly teacher (Amitabh Bachchan) in a hospital.  He has full blown Alzheimer’s.  While visiting with him, Michelle thinks back on her life and the impact her teacher has had on it.
In the early 1900s Michelle’s Anglo-Indian parents are delighted when they have her, but tragedy strikes and Michelle becomes both deaf and blind.  Not being able to hear, she also remains mute.  At first they try to treat her as well as they can, but eventually she becomes so violent and disruptive that they have to do something.  She is becoming a danger to her younger sister.  They bring in a teacher (Bachchan) who employs out of the ordinary methods.  Michelle’s father does not care for the way the teacher is with his daughter (Ayesha Kapoor), feeling that he is being too tough with her.  I thought the teacher went too far sometimes, too, but this was 100 years ago when teachers had a much firmer hand with students.  Just when the father has had enough and is getting rid of the teacher, young Michelle finally has a breakthrough and understands the concept of communicating via touch.  The first word she learns is B-L-A-C-K.
The movie now shifts several years later and we see Michelle as a young woman attending college.  Her teacher and a servant have accompanied her.  Her teacher communicates everything the professors say, and then he speaks back to the professors when Michelle wants to say something.  Needless to say, this is not a very efficient way to learn, but Michelle perseveres.  She spends many years in college, constantly working through enough classes to try to get her degree.  She seems to always come up a little short of passing, though.  It is very difficult for her to understand the questions, and respond with her answers (by typing), in the time allotted for the tests.
Meanwhile, her teacher has started to show his age.  He was already older than her parents when they met, and he has now spent 20 years or more with her as her constant companion, teacher, and friend.  Michelle is not a little child anymore, either.  She is an adult, and adults need and want different things than little girls do.  Between this and her teacher’s health, their relationship is strained to the breaking point.  We know from the opening of the film that it has been years since she last saw him.
I will not say what the rest of Michelle’s and her teacher’s story is, but I am man enough to admit that it brought a tear to my eye both for joy and for sadness.
This film is very well made.  The sets, clothing, cars, etc. definitely feel authentic to the period of the film (pre and post 1920s).  I mostly want to discuss the acting, though.
Both Rani Mukerji and Ayesha Kapoor, as the older and younger versions of Michelle, did fantastic jobs portraying someone deaf and blind.  It must have been especially hard for the younger actress Kapoor to never let her eyes focus in on anything.  Mukerji at first turned down the role because she felt she wasn’t up to it, but the filmmakers convinced her to come on board.  She spent several months learning sign language, Braille, and how a deaf/blind person would live.  She developed a walk with a cane out in front of her that a person like that would use.  I have to say that it reminded me a little bit of Charlie Chaplin’s tramp character, and it must have done the same for the filmmakers because in a couple of scenes we see movie marquees advertising Chaplin’s films The Kid (1921) and The Gold Rush (1925).
No discussion of acting in Indian cinema would be complete without mentioning Amitabh Bachchan.  When I was loaned this movie Bachchan was mentioned to me as the star of the film.  When the guys from India saw the blank look on my face they tried to explain who he was in Indian cinema.  The first said he was Tom Cruise.  The second said he was Robert Deniro.  They kind of looked at each other then said he was both.  They were referring to the fact that Bachchan first became a star in more action oriented roles in the 1970s, and then later in his career took on more serious roles.  In fact, Bachchan also can be compared to Arnold Schwarzenegger and Morgan Freeman.  Bachchan left acting for a few years in the 1980s to enter politics.  He also has a very resonant voice that he has leant to any number of narrations and voiceovers.  (He is the famous person that the youngest Jamal is so desperate to get the autograph of in 2008’s Slumdog Millionaire.)

In Black he plays a complex character at multiple stages of his life.  He is a teacher looking for redemption, then a successful mentor and companion to a young woman, then someone starting to suffer from the early stages of Alzheimer’s, then a patient in the full blown stages.  At each stage he was absolutely spot on.  Like Mukerji, he spent several months preparing for the role by learning how to sign and how teachers of deaf/blind people work.
As you might expect, this film won many awards at ’s two major film events, including actor, actress, and supporting actress for the three people I just wrote about.  It did not have a chance to receive an Oscar nomination, though, because ’s film board decided to submit a more traditional Bollywood movie for their country’s one allowed entry.
The only reason I can see that someone would not like this film is if they are scared of subtitles.  Even then that’s not a reason to skip this film.  If you dislike musicals, you don’t have to worry about singing and dancing.  This is one Bollywood film that is a straight ahead drama.  The score is very well done, but there is not a single song to be found in the movie.  It is well-acted, well-made, and I highly recommend this film.
Chip’s Rating: 4 out of 5 stars