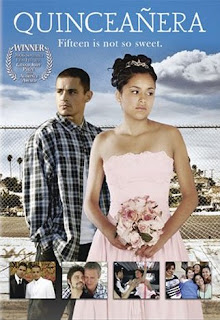 For those of you who get your information on quinceaneras from episodes of Wizards of Waverly Place, you should know that they are not really a sweet sixteen party for fifteen year old Hispanic girls.  They are actually more akin to a Jewish Bat Mitzvah since they symbolize the girl becoming an adult.  The rituals involved in them vary from country to country and culture to culture.  In all aspects, though, they are about the girl growing up and becoming an adult.  In the larger sense that is what the movie Quinceanera is about, too.
This film was co-written and co-directed by Richard Glatzer and Wash Westmoreland.  At the 2006 Sundance Film Festival they took home not only the Audience Award for this movie, but the Grand Jury Prize as well.
(played by newcomer Emily Rios) dreams of having a quinceanera that is just as big as the one thrown for one of her cousins.  Instead she has to wear a hand me down dress.  While being fitted for it, her family finds out that she has put on weight.  After she is tested they find out that it is due to a pregnancy.  She is very confused because she is still a virgin.  She and a boy fooled around some, but that was it.  Her father refuses to believe her and he kicks her out of the house.  She makes her way to her great uncle Tomas, who takes her in.
She chose Tomas because Carlos, a cousin of hers who is the black sheep of the family, was also taken in by Tomas.  Together the three of them start to make a new family.  Things don’t get completely better, though, because a yuppie couple has just bought the building that they live in and they have told Tomas that he is going to have to move out when his lease is up.
This couple is two gay men who have exchanged rings and vows, even though marriage was not yet legal in .  What I found interesting is that they are obviously based on the two filmmakers, yet their characters are not portrayed in a very positive light.  First, they are kicking out a kindly old man because they can make more money by fixing up the place and renting it to more upscale people.  Second, even though they are supposedly partners in a committed relationship, they are shown cheating with others.  In general, had straight filmmakers portrayed a gay couple that way they would have caught a ton of flack for it.  In particular, the movie had to have opened up questions for Glatzer and Westmoreland about their own relationship.  Personally, I found it refreshing after so many politically correct movies where every gay character is a complete and utter saint.
These are the five major characters for the majority of the movie.  has to grow up fast with her baby on the way and her estrangement from her father.  Carlos has to figure out if he is going to do something with his life and just what his place is in the world.  Tomas has to deal with the coming loss of his home and all the folk art he has created there.  The yuppie couple has to figure out what is going to come of their relationship.
I may have made the movie sound so bleak that you do not want to watch it.  If so, that is not the case.  I would describe this movie as bittersweet.  Yes, there are hard times in it, but there are good times as well.  It is also a good movie to show teenagers who think that they can’t get pregnant if they don’t “go all the way”.  I recommend that you give this movie a try.
Chip’s Rating: 3 out of 5 stars
[Note – you can see all the Movies by Numbers, as well as get some hints on what’s to come, at this link.]