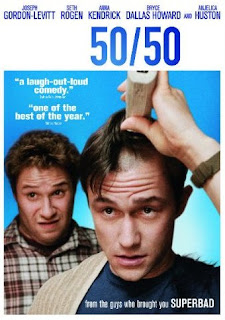 The movie 50/50 is based on actual events in the life of Seth Rogen and his friend Will Reiser.  Rogen convinced Reiser to write a screenplay about his battle with cancer when Rogen knew him in his twenties.  (Reiser was given a 50/50 chance to live, hence the title.)  The result is a bittersweet comedy/drama with an excellent lead performance by Joseph Gordon-Levitt.
Seth Rogen’s involvement is both good and bad.  Because he was part of the real story, Rogen appearing in the film as the best friend character was a foregone conclusion.  He plays the same kind of loudmouth-asshole-who-learns-to-grow-up-a-little that he has done so often.  This was funny….several films ago.  It’s gotten kind of tired now.  The thing is, though, without Rogen’s involvement there probably would not have been a movie in the first place, so the good outweighs the bad.
Now I’m not saying that Rogen is horrible in the movie.  I laughed at several of his jokes.  It’s just that a little bit of him goes a long way.  Had they cut about ten minutes of him doing his shtick in the first half of the movie, it would have improved it to a four star rating.
Gordon-Levitt plays Adam, a clean living man in his late twenties.  He has been having some back pain and finally sees a doctor about it.  It turns out to be a cancerous tumor.  His girlfriend (Bryce Dallas Howard) is thrown, but promises to stick by him.  As the movie goes on, it quickly becomes apparent that she isn’t going to keep this promise.
His best friend Kyle (Seth Rogen) is all about getting laid.  He convinces Adam to actually use his cancer to pick up women in bars and get sympathy sex from them.  If he (Kyle) just happens to get laid by her friend, then so much the better.  After a while Adam realizes that he can’t rely on Kyle any more than he could his girlfriend.
While he is undergoing his chemotherapy he meets two older patients played by Philip Baker Hall and Matt Frewer.  Both do an excellent job in their small roles.  Also doing a great job is Anjelica Huston in her small role as Adam’s smothering mother.
The final member of the main cast is Anna Kendrick, who plays a very young therapist.  It’s a teaching hospital, this is one of her courses, and Adam is the third patient she has ever had.  He makes a Doogie Howser joke and when she’s too young to understand what he’s referring to, it makes him feel even less comfortable with her age.  He doesn’t have much choice, though, so he sees her weekly to talk about his cancer and treatments.  As the sessions go along, the two of them start to bond, and not in the way that a therapist and patient are supposed to.  (Kendrick has described her character as the worst therapist in the world.)  She is very appealing in her role, though.
While there is humor throughout the movie, the heaviest drama comes towards the latter part of the film when it starts to become apparent to Adam that his 50/50 chance of living might be coming down on the wrong side of the line.  There is a great scene with his mother late in the movie.  Gordon-Levitt really sells it.  In fact, it’s his performance that really makes this movie.
If you are a big fan of Seth Rogen, then this movie is highly recommended.  It will give you just what you have come to expect from him.  If you are not a fan of his, you should still give this movie a try.  As I said at the top, there is more good than bad with him being involved in this movie.  If you watch it, I think you will still like it.  If you cannot stand Seth Rogen, I’d hate for you to miss a good film, but he might tip the movie too much toward the bad for you.
Chip’s Rating: 3 out of 5 stars
[Note – you can see all the Movies by Numbers at this link.]