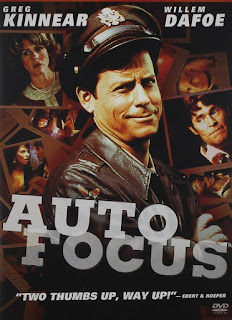 We have come to the eleventh of twelve movie selections Steve Honeywell at 1001plus has made for me.  This one is Auto Focus, a look at 15 years in the life of actor Bob Crane who is best known for his starring role as Colonel Hogan on the TV show Hogan’s Heroes, and for being the victim of a still unsolved murder.  Not as well known is that he was an early adopter of video camera and video tape technology which he then used to record himself having sex with any number of female fans.  This movie delves into that quite a bit.  From listening to the separate commentary tracks from both the director and the two main actors it’s apparent that they saw Bob Crane in completely different lights.  The result is a mixed view of the man.


I’ve actually owned this movie on DVD for years, but I had never watched it.  I bought it at a going out of business sale a video rental place was having.  As a kid I had been a fan of the TV show Hogan’s Heroes when it was syndicated on a local TV channel during the day in the 1970s.  I remember hearing that Bob Crane was murdered in the late 70s, that they pretty much knew who did it, but that the local DA didn’t bother to prosecute.  The general understanding was that the DA felt Crane “got what was coming to him” because of all the photos and film of sex that had been discovered with the body.  As I found out from watching a documentary included on the DVD, that was actually not the case.  More on that in a bit.

The film isn’t really about the murder, but about how (in director Paul Schrader’s mind) Crane stopped pretending to be an upright family man and revealed to the world the sleaze he really was.  Actors Greg Kinnear, who plays Crane, and Willem Dafoe, who plays a man named John Carpenter, feel the film is about how fame can corrupt anyone.

The movie opens with Crane as a pious, church going, best friends with the priest, non-drinking, non-smoking, interviewed by Christian publications, loving husband of 15 years, and father of three children.  As Schrader makes apparent in his commentary he feels this was a lie Crane was telling the world.  Schrader says straight out that he does not believe that makes people evil; he believes evil people come to because it allows them to be evil.  “Evil” is his word.  The first thing that ran through my head when I heard this was, “You’ve worked in for decades.  What does this say about you?”  Schrader’s later comments about how the actresses appearing nude in the film were “not real actresses” and his strong implication that they were basically sluts and whores for doing it also showed just where Schrader’s mind was at while making this movie.  In real life Crane was not the second coming of Pat Boone.  That’s fiction that Schrader threw in to make a bigger contrast with where Crane ended up (which is also exaggerated.)

The story starts in 1964 with Crane as one of the most popular radio disk jockeys in southern .  This was back when a DJ was a real personality and was far more famous than they are today.  His agent convinces Crane to audition for the lead in a new TV comedy about a German POW camp – Hogan’s Heroes.  Crane becomes a huge star from this.  Just as an aside – it was fun for me to see how this movie re-created the show in a few scenes.  Schrader said in his commentary that Kinnear often would suggest changes and corrections to Schrader during these scenes because Kinnear had made quite a study of the show.  Schrader says he didn’t much care if it was accurate or not, but he decided to humor his actor.

It’s while on this show that Crane meets John Carpenter, who is an audio/video specialist to the stars.  He had all the latest stereo equipment, and as the film goes on, video equipment, too.  Crane had two passions in life – playing the drums and photography.  The concept of being able to record video and not have to have it then sent to a film lab for processing was fascinating to him.  Like he says in the film, “This is the Polaroid picture of video.”

Carpenter also introduces Crane to strip clubs and sex with random women.  Crane likes to play drums, and this was back in the day when a live jazz band would play backing music for the dancers, so he ends up sitting in more and more on stage playing drums for the dancers.  Carpenter and Crane became almost inseparable as their appetite for women just increases.  And there is an almost never ending supply since female fans will throw themselves at a famous, rich, good-looking man like Bob Crane, and Carpenter would get the overflow.

Crane’s wife catches him, of course.  She snoops through his dark room and finds the photos.  She divorces him, but Crane marries an actress from Hogan’s Heroes that he has been sleeping with regularly.  She knows what he does and doesn’t mind…..yet.

The movie then veers into fiction again by saying that after Hogan’s Heroes got done in 1971 Crane couldn’t find any work except for dinner theater and that this was happening because everyone felt he was sleazy for all the sleeping around, photographing, and videotaping he was doing.  It shows how he supposedly became an enormous public sleaze who had no filter between his brain and mouth when he saw any woman he wanted to sleep with.

The reality is that Crane worked continuously in TV and movies from the time Hogan’s Heroes ended in 1971 up until his murder in 1978.  IMDB shows 17 different credits in that seven year span, including his own TV show in 1975.  In addition, while the people who knew him were well aware of his activities when not working, it was not common knowledge across the industry.  He certainly hit on every female interviewer he was attracted to (this was the non-politically correct 1970s), but he didn’t just say crude things about random women in the audiences of shows he was on, as the movie tries to show.  That didn’t fit Schrader’s narrative, though, so he changed it.  Just as the opening public piousness is exaggerated, so is the ending public sleaziness.

By the time of his murder Crane was going through a nasty divorce from his second wife because of his womanizing, he and Carpenter were starting to fight with each other, and Crane was carrying on an affair with his dinner theater co-star, who was in a relationship with another man.  The movie does not show who murdered him, but it points the finger.  The film’s not really about the murder, though, despite being based on the Robert Graysmith book The Murder of Bob Crane.  It’s not a murder mystery or whodunit.  As Schrader says, he was much more interested in showing how a man that pretended to be good was actually nothing like he was pretending to be.

Kinnear does a great job in the role, especially in resisting Schrader’s lack of focus in multiple areas.  If it were not for the subject matter he probably would have gotten consideration for an Oscar nomination.  So, too, does Willem Dafoe do a good job as Crane’s only friend who is a combination of hanger on, lackey, buddy, and fellow enthusiast.

I mentioned there was a documentary on the DVD.  It looks like it might have been an episode of a TV show that delved into unsolved murders.  As I came to find out from this (and from then reading more later), the story that the police pretty much knew who did it, but didn’t bother to prosecute because of a distaste for Crane’s lifestyle, was not correct.  In reality, they feel they know who did it despite the fact that there was almost no evidence pointing to the person, and what little they did have was completely circumstantial.  In addition, it was practically the Keystone Cops at the crime scene where they completely contaminated it, didn’t bother to collect some evidence, lost other evidence, and brought in a coroner who couldn’t even determine an approximate time of death.  When they finally got a new DA, he did prosecute the suspect, but even I could have successfully defended this person from the charges.  The person was found not guilty and died a few years later.  To this day the case is officially unsolved, but the police there still insist it was the person they tried and seem oblivious to the fact that wanting it to be that person, to the point of not even bothering to look at anyone else, does not actually make that person the true killer.

This is good extra content on the DVD, if you are interested after seeing the movie in learning more (like I was.)  The film itself does not shy away from Crane’s extra-curricular activities.  It initially got an NC-17 rating for a simulated oral sex scene.  Schrader blurred it out in the film (it’s very noticeable) in order to get an R rating.  If human sexuality in a movie makes you uncomfortable then you will probably want to avoid this movie.  Of course, nowadays just about every person who’s even mildly exhibitionist (which includes most of ) has either taken nude selfies or filmed themselves having sex.  A couple of years ago dozens of actresses who were foolish enough to buy Apple products discovered that the crappy Cloud security had allowed people to download their photos and videos – ones just like what we see in this film.  If you think about it, Crane was really just an early adopter for an activity that is far more common today.  So, if seeing this kind of activity in a movie would not bother you, or at least not bother you to the point of ruining the movie for you, then I recommend you give Auto Focus a try.