In Defense of the Movie Tomorrowland (2015) 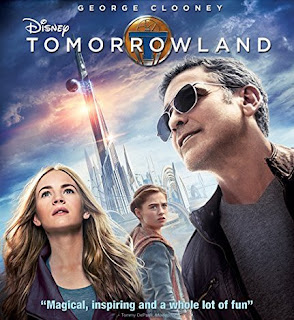 Note: this is a revised and expanded version of the comments I left on Letterboxd after seeing this film a few weeks ago.

Back in 1999 parents were crying out for a well done animated movie they could take their kids to, one that wasn't incredibly stupid and/or made primarily to sell toys.  Brad Bird answered that call and came out with The Iron Giant. The result?  It was a blip at the box office and quickly went to video.  I saw it when it came to VHS and loved it.  I couldn't get anyone to watch it, though.  “No singing?  No toys for my kids to play with?  What kind of animated movie is that?”


Some who saw it even denounced it as nothing but twaddle from liberal elites.  A few people did recognize how great it was, though, and Pixar was among them. They snapped up Brad Bird and he did The Incredibles for them, among others.  It was only after that came out that people started looking into what Bird had done before and then The Iron Giant was finally discovered and appreciated by more people.

Fast forward to 2015.  People are crying out for some big, original movies, ones that aren't sequels, reboots, or based on comic books.  Brad Bird answers that call.  He comes out with Tomorrowland, a big movie with a great message as well as several intelligent concepts being presented.  The result?  It was pretty much ignored at the box office in favor of sequels, reboots, and comic book adaptations and it quickly left theaters.

It’s not the kind of movie that can be summarized in a few words (perhaps another reason why some have rejected it), but I will try.  In the 1960s a young boy is an inventor and gets pulled into a century old plan by the greatest thinkers to improve the world.  Then in the present we see a teenage girl (Britt Robertson) also get pulled in.  She visits the now 50-something inventor (George Clooney) for answers.  The common bridge between them is an android (Raffey Cassidey).  The antagonist is played by Hugh Laurie, but as happens in the better movies, he’s not pure moustache twirling evil.  He wants the same thing they do – a better world.  At one point he actually makes a very good case for why he is doing what he is doing.

When I watched Tomorrowland I found it to be a really good film.  It harkens back to the time when people looked forward to the future, when people were constantly striving to improve themselves and the world around them, when hope and optimism were par for the course.  (Perhaps some people feel that’s out of place in today’s cynical, instant negative tweet/comment world.)

In addition, Tomorrowland brings up some great questions to think about.  If you could know the exact moment of your death would you want to be told?  (Robert Heinlein's short story Lifeline explored this same concept, but probably relatively few movie goers have read this 76 year old short story.)  Another is what is the nature of cause and effect? Does knowing the future become the cause of it or does it give a chance to prevent it? How predetermined is the future? Would knowing about the dangers to society allow people to work to prevent them, or would it instead make them give up hope and/or even embrace their downfall? These are just a sample of the questions this film raises.  Hell, the entire central question of Ex Machina (2015) – whether an AI is only the sum of its programming or can it be something more – is just one of the subplots in Tomorrowland.

After reading through the IMDB message boards, though, it appears the vast majority of folks completely missed anything other than the visuals that were on display in the film. You'd think that after the Matrix films people would understand that just because there is a lot of cgi that doesn't mean that there isn't also something more than that going on. Recent films such as Sucker Punch (2011), which asked questions about the nature of reality, Cloud Atlas (2012), which asked questions about time, space, gender, and race, and this film, discussed here, all seem to have been dismissed as nothing more than big cgi spectacles with pointless plots in them.

Tomorrowland presents the concept that the hyperbole and negativity that are so prevalent today are harmful and that to address it will take people who think bigger, who have hopes and dreams and who want to help others.  The irony is that the film is being torn down by that very same hyperbole and negativity.  (Some of it is the same "liberal twaddle" charge that The Iron Giant received.)

An example of the negative hyperbole that this film has attracted is that it presents an innocent, chaste, and very touching connection between two characters yet there are tons of comments on IMDB screaming "this movie promotes pedophilia!!!!!!"  That's just utterly ridiculous.  Any negativity such as that is not in the film; it's in the minds of the people making those charges.  Hell, the movie is rated PG, for God's sake.

It's sad that people will avoid this film because of the negativity it has attracted.  It's also too bad for the young actress Raffey Cassidy because this should have been a star-making role for her.  She plays a decades old android that is in the guise of an adolescent girl.  In a few scenes she gets to play a dignified girl of that age.  In fact, when she first appears she's practically a mini Audrey Hepburn from Roman Holiday.  For most of the film, though, she has to display a maturity and depth that comes with decades of life experience - all while holding her emotions mostly in check.  She also gets to kick some serious ass in a couple of scenes.  She did most of her own stunts, too.

Unfortunately, most people aren't going to see this performance from her.  I am not exaggerating when I say that if this movie had been celebrated instead of torn down I feel she would have been getting talk about a Best Supporting Actress nomination.  She's that good in this film.

Unfortunately, most people ignore all of the above.  They just look at the bright, shiny images and get amused by seeing Dr. Doug Ross and Dr. Gregory House try to beat the crap out of each other in one scene.

But....I am going to embrace the message of this movie and I'm going to have hope that given time people will discover this film just as they did The Iron Giant.  Unless you blindly buy into the negativity this movie has generated then I highly recommend it to you.