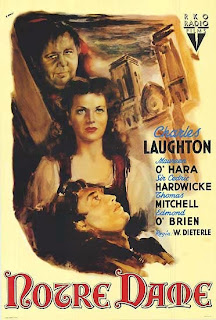 The Hunchback of Notre Dame is based on the 1831 Victor Hugo novel of the same (translated) name.  I have not read it, but it’s my understanding that this film adaptation differs from it in several ways, including the ending.  If that is the case then perhaps it is for the better because this film has one of the all time great closing lines in film history.  I will not spoil it here, but anyone who has seen the film knows what I am referring to.  And if you saw it and was unmoved then you must be made of stone yourself.


The title character is played by Charles Laughton in what might be his greatest screen performance – and that’s saying something.  Despite the heavy makeup he wore for the role he still gives a top notch performance that shows through.  And get this – not only didn’t he win an Oscar for this role; he wasn’t even nominated.  The competition that year was incredible: Clark Gable from Gone with the Wind; Laurence Olivier from ; James Stewart from Mr. Smith Goes to Washington; and winner Robert Donat from Goodbye, Mr. Chips.  Only Mickey Rooney from Babes in Arms was a clunker.  How Laughton wasn’t the fifth nominee instead I’ll never know.

Being overlooked by the Academy didn’t stop at Laughton’s performance.  The film wasn’t even one of the ten nominees for Best Picture.  Once again the competition was tremendous.  After the aforementioned Gone with the Wind, Mr. Smith Goes to , Goodbye Mr. Chips, and , also nominated was The Wizard of Oz, Stagecoach, Of Mice and Men, Ninotchka, Dark Victory, and Love Affair.

The Hunchback of Notre Dame ended up receiving only two Oscar nominations – Best Sound and Best Music Scoring – and it lost in both categories.  Despite all of this I consider it the third best film of the year – better than most of the movies that were nominated.

For those who are not familiar with the story there is a beautiful gypsy woman named Esmeralda (Maureen O’Hara) who is being harassed by the King’s men in .  She seeks refuge in Notre Dame Cathedral and meets the bell ringer there, a deformed man known as Quasimodo (Laughton).  Unfortunately for her, the King’s chief enforcer, Frollo (Cedric Hardwicke), is the one who is driving the men to persecute the gypsies, and he also happens to be Quasimodo’s guardian.

Frollo orders Quasimodo to capture Esmeralda, but she escapes to the underground (literally) and meets many of the poor people of .  She saves the life of a poet, Gringoire (Edmond O’Brien is his film debut), but Frollo will not rest until he gets her back.  In a jealous rage Frollo kills Esmeralda’s lover and has her blamed for the crime.  In probably the most famous scene in the story Quasimodo saves her from the gallows and offers her sanctuary in Notre Dame Cathedral.

Frollo isn’t about to let a little thing like God stop him.  He urges the nobles to overturn sanctuary.  At the same time the poor try to decide if they should ignore the sanctity of the church and storm it to get to her.  Needless to say, things come to a head.

This was a very costly film for the time.  Among the expenses was an entire replica of Notre Dame Cathedral built on a studio lot.  And yet this film still managed to make a small profit despite the high expenses, and despite, get this, opening at the same time as Gone with the Wind – the all time box office champ when adjusted for inflation.

O’Hara is gorgeous as Esmeralda, and Hardwicke is hissably evil as Frollo, but it’s Laughton who is easily the best performer in the film.  It must have been hard to not only act with all that makeup on his face, but to also make the viewer almost stop seeing the deformity and instead see the man he is underneath all of that.  Esmeralda brings that out in Quasimodo, both to his joy and his anguish.

If you have not seen this film then you are missing out.  Laughton may have been the best actor of the entire 1930s.  Take a look at his 1935 work alone – Captain Bly in Mutiny on the Bounty, Ruggles in Ruggles of Red Gap, and Inspector Javert in Les Miserables.  If he was the best of the decade he certainly picked a fitting way to finish it off with The Hunchback of Notre Dame.  I highly recommend this film.