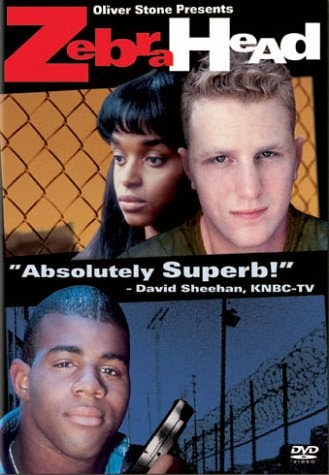 Zebrahead is a small independent film that made somewhat of a splash when it came out, but then was pretty much forgotten over the next couple of decades.  I honestly can’t remember the last time I even came across a reference to it, so if you’ve never heard of this movie you’re probably in good company.  It features some good performances by the young stars (Michael Rappaport and N’Bushe Wright), both in their first feature films.  It also features three dimensional portrayals of teenagers – something that is rare in movies.  It is the combination of the lead actors and the naturalistic presentation of teenagers that make this film worth seeking out.


Zebrahead won the Filmmaker’s Trophy at the Sundance Film Festival and Rappaport was nominated for Best Actor at the Independent Spirit Awards.  The movie didn’t attract any love from the Oscars, though, probably because there are places in it where it’s obvious this is a first time effort from writer/director Anthony Drazan.

Zack (Rappaport) is a teenager growing up in a bad part of .  The culture in the city, and especially in his neighborhood and high school, is dominated by rap and the newly emerging hip hop movement.  Zack is fully immersed in all of this and he speaks and acts just like all his other friends.  There’s one exception, though; he’s white and they are all black.

His best friend is Dee ( ) and Zack is practically a part of ’s family.  No one sees anything out of the ordinary about Zack until Dee’s pretty cousin Nikki (Wright) arrives from .  She’s not someone to be trifled with and she immediately writes Zack off as a big time wannabee who’s just trying to “act black”.

It takes a while, but he finally manages to convince her he is the real thing.  It doesn’t hurt that the two of them are very attracted to each other.  Nikki has never even thought about dating a white boy, though, so it’s a big step for her.  Zack goes to his father for advice, but let’s just say that other than instilling a love for Motown music, Zack’s dad (Ray Sharkey) hasn’t had the best influence on him.

Zack and Nikki start getting serious and that’s where prejudices start to appear.  Nikki’s mother tries to warn her away from Zack, thinking he’s only dating her to “experiment” with black girls.  Kids at school start telling them they don’t belong together.  Even Dee’s family, who seemed to practically consider Zack another son, tell him flat out that he’s white, Nikki’s black, and they’re never going to be able to change that.

Bowing to peer pressure Zack does something stupid that alienates Nikki.  She takes up with another kid in school named Nut (Ron Johnson), who’s primary pitch to her on why he’s better than Zack is that he’s black like Nikki.  Zack’s not out of the picture, though, and tensions are soon rising between him and Nut.

Interspersed among the main plot line are scenes in and around the neighborhoods that add some depth and flavor to the area.  For instance, we see a man easily set fire to his lawn because it is so toxic from a chemical plant next door.  We also see Zack’s dad running a record store and can tell that there’s no way it’s ever going to be able to remain open.  It’s in a deteriorating neighborhood and Motown music has fallen out of favor with the latest generation as rap and hip hop have taken over.

I mentioned at the top that both Rappaport and Wright do really good jobs in what are their movie debuts.  Both of them add depth and rise above what could have been generic white boy/black girl roles.  Rappaport looks about as white as you can possibly be, so when we first see him “acting black” it is a little jarring, but he does such a good job with the earnestness behind it that it doesn’t take long to win the audience over.

If there is one place this film falls short it’s with the ending.  It doesn’t really feel like it fits with the rest of the movie.  It’s not horrible, by any means, but it’s almost like someone told Dravan that his movie didn’t have enough energy in it and he tried to inject it all into the ending.  The thing is, the movie is driven by the characters and their lives; the ending could have flowed from those stories and it would have been better.

The performances rise above that, though.  And the other teenagers that fill out the cast have a realness about them that most movies miss completely.  Despite focusing on characters that are in high school this is far from being a “teen movie”.  We thankfully go without the token nerd, token wild girl, token jock, etc.  If you like good performances and/or if this film sounds interesting then I recommend you give it a try.