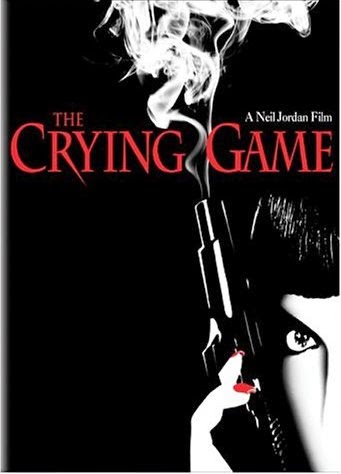 The film The Crying Game actually represents something unique in all my movie-watching experiences.  (No, it’s not the twist, for those who have already seen it.)  It’s that I specifically went to see this movie in the theater before it got spoiled for me.  It may be hard nowadays to imagine a time when every single film wasn’t already spoiled well in advance with social media reporting casting and storylines well before the movie is even released, but this was the way it was in 1992.  You could actually go see a movie not knowing anything more about it than what you saw in the trailer, if you even saw that.

The Crying Game was a little different in that it was making news for the fact that it had a fantastic twist in it that supposedly you wouldn’t see coming.  I decided I’d rent it right away when it came out on VHS tape, but then it went and got nominated for six Oscars, including Best Picture.  (It would eventually win for Best Original Screenplay.)  I knew there was little chance of it having that kind of attention being paid to it by the press and it not getting spoiled for me.  I decided on a pre-emptive strike: I’d go see it in the theater.  To this day that is still the only time where the primary reason I bought a movie ticket was to see a movie I knew would be spoiled for me if I didn’t see it as soon as possible.  And you know what?  It was well worth it.


Despite the fact that I often did figure out the twists in movies I knew had them (i.e. The Usual Suspects, The Sixth Sense), I was absolutely and completely fooled by this film.  In fact, I correctly saw a smaller twist coming and was disappointed at first thinking that was supposed to be the big reveal, then wham! there was the real one.

The Crying Game opens with a kidnapping plot.  Fergus (Stephen Rea) is a semi-loser who is a low-level operative for the IRA.  His bosses Jude (Miranda Richardson) and Maguire (Adrian Dunbar) kidnap British soldier Jody (Forrest Whitaker).  They want to exchange him for an IRA terrorist the British have captured.  While waiting for this to play out, Fergus and Jody start to bond.  Jody tells him about his girlfriend Dil back in in an attempt to weaken Fergus’ resolve to kill him if it comes to that.  It works, but things still go to hell and everyone except Fergus apparently ends up dead.  (I say “apparently” because this was the smaller twist I felt was really obvious and was initially disappointed by.)

Fergus makes his way to and out of a morbid sense of curiosity goes to the bar Jody said he and Dil used to frequent.  The bartender (Jim Broadbent) points Dil (Jaye Davidson) out to Fergus.  He sees Dil being almost accosted by a man and comes to her defense.  Despite their differences in nationality and race a bond starts to develop between Fergus and Dil, at first out of his guilt about Jody, then it becomes more real as he spends more time with her.  There’s one problem: Dil’s got a secret she hasn’t revealed to Fergus yet.

This is the big twist and I won’t be spoiling it here.  Let’s just say it causes Fergus a great deal of emotional pain and makes him reevaluate how he feels about her.  And if this isn’t enough trouble for Fergus, Jude and Maguire reappear and force him into taking on what will likely be a suicide mission.  If he doesn’t, they will hurt Dil.  A film that started out a little tense, then downshifted into relationship mode, now becomes quite tense as both storylines merge.

Stephen Rea does a great job in the lead role.  His character is worn down by life and can’t seem to catch a break.  Dil at first seems to be a rare bright spot for him, but her secret might doom even that – and that’s assuming they manage to somehow survive the return of the IRA terrorists.  Both of them were nominated for Oscars for their performances.  Over the years Rea has morphed into a character actor and often appears in writer/director Neil Jordan’s films.  Davidson got a major role in Stargate (1994), but then never really worked again.

The supporting cast is also quite good, which you’d expect with four future Oscar nominations and two future wins among them.  And this is also the film that really put Neil Jordan on the map.

This film was initially a failure in the and , probably because of the political overtones.  It did not become popular until it was released in the , where it became a hit.  After the Oscars it was re-released in the and finally became a hit there, too.  Critics loved it and it’s one of the few films that have a perfect 100% Fresh rating at Rotten Tomatoes.

I actually can’t remember the audience’s reaction to the reveal of the twist.  It was so quick I wasn’t sure at first if I had seen right and I think some of the others in the audience might have missed it entirely.  I do remember chuckling at how the song playing over the end credits (Tammy Wynette’s country music classic Stand By Your Man, performed by Lyle Lovett) was so perfectly appropriate, in a really twisted way.  As I was walking out a teenage girl in the couple behind me just said in a disapproving voice “That’s sick!”  Her boyfriend appeared to be amused by her reaction.

The Crying Game entered pop culture history.  The twist has become relatively well known, so much so that references to this film have been made in many other places.  I remember seeing one as soon after as Ace Ventura: Pet Detective in 1994.  If you have somehow managed to make it to this point in your life without knowing the twist then you owe it to yourself to watch this movie as soon as possible.  Unless you don’t want to take a chance on being unpleasantly surprised (like the teenage girl I mentioned) then I highly recommend this film.