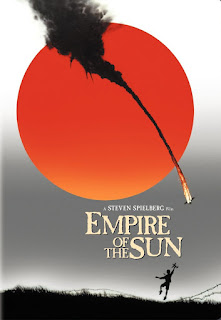 Empire of the Sun was the first “serious” Steven Spielberg movie that I saw.  Yes, he had done The Color Purple two years earlier, but I never saw that until about a year ago.  Spielberg was tired of being passed over by the Oscars because people thought he only did popcorn movies.  He started doing “serious” movies to change his image, although it still didn’t work until he did Schindler’s List (1993), which even the old grumps in the Academy finally couldn’t ignore.  Empire of the Sun is also the first film in which I ever saw Christian Bale, who plays the lead character.  I consider this movie to be the best Spielberg film that relatively few people have heard of.

Empire of the Sun was adapted by Tom Stoppard from the 1984 book of the same name by J.G. Ballard.  Known early in his career for writing science fiction, Ballard decided to write a semi-autobiographical novel of his experiences as a boy in during World War II.  Like the character of Jamie, Ballard was kept in an internment camp by the Japanese, although he was still with his parents.  (The “J” in his name stands for James.)

The film opens in 1941 in .  Jamie (Christian Bale) is a roughly 12 year old boy of privilege.  His father is a rich British businessman.  They live outside the city in a mansion with servants catering to all their needs.  Jamie is fascinated with planes and wants to be a pilot when he grows up.  This bothers his wealthy father.

Jamie is also a spoiled brat.  He treats the servants horribly, demands things all the time, is bored a lot, and just generally gets whatever he wants.  Things are about to change in a big way for him.  The Japanese, who had already taken over northeastern , invade the area around .  During the insanity, Jamie gets separated from his parents as they all try to escape.  He makes his way back to the mansion, which is being looted by the servants.  One takes time out to deliver a good slap to him, which may be the biggest surprise of all for him.

Jamie manages to live alone at the mansion for a while, eating the food and drinking water from the pool.  He finally has to go into , though.  He finds the Japanese are firmly in control.  He runs into a man named Frank (Joe Pantoliano) who takes him back to meet his partner Basie (John Malkovich).  The two are in the black market and are doing whatever they need to in order to survive.  That includes trying to make a deal to sell Jamie as a laborer.

Jamie pleads with them not to do it, and tries to negotiate by telling them about the rich mansions out where he was living.  They go there, but the Japanese have taken them over and they are all captured.  They eventually get taken to an internment camp for all the foreigners that were in the country.

There is a great transition in the film at this point.  Up to now we have seen a pampered Jamie, maybe with some baby fat still on him.  Reportedly, Spielberg shot all of these scenes first thing, and then delayed for a bit before shooting the rest.  This allowed him to take advantage of what puberty was doing to Bale’s appearance.  The transition shows the formerly pampered brat as a lean, more mature expert at working all the cons at the internment camp they are in.  Jamie runs throughout the camp, swiping a bar of soap here, trading for that item there, constantly running and running.  His hair is shorter, his face leaner.

Basie has sort of taken over the camp, with Jamie as one of his helpers.  Every now and then, though, we are reminded that the Japanese are still very much in control.  This includes them beating Basie so badly that he ends up in the infirmary.

Among the diversions Jamie has is a Japanese boy about his age that he can see through the fence of the camp.  They form a bond because that boy seems to be as excited about planes and flying as Jamie is.  The fact that there is an airfield right nearby thrills both of them.

I won’t say what else happens in the internment camp and who does and does not survive.  I will say that the story does go through to the liberation of that region.  It’s not so much about that, though, as it is the story of this boy who has to go through a lot to try to survive.

Bale did a great job in this film.  I can’t honestly say that I thought to myself, “That boy’s going to win an Oscar someday”, but I did definitely remember him and checked out a few later films he did before he became famous.  (Watch for him in Branagh’s 1989 film Henry V, for instance.)  And showing that even as a child it’s “who you know”, Spielberg only considered Bale for the part because Amy Irving, Spielberg’s wife at the time, had strongly urged him to do so because she had worked with Bale on a TV mini-series.

Speaking of early roles, in Empire of the Sun watch for small appearances by Miranda Richardson and Ben Stiller.  I’ve read that originally their parts were more extensive, but that the film was cut down for release and that much of their performances hit the cutting room floor.

The film received six Oscar nominations, although Spielberg was left on the outside looking in.  One of the nominations was for Cinematography, and it definitely deserved it.  There are many beautiful shots in this film.  By the way, watch for a re-creation of Norman Rockwell’s famous painting Freedom from Fear early in the film when Jamie’s parents tuck him in to bed.

As I mentioned at the top, this is probably the Steven Spielberg film that people know the least and that’s too bad.  It is a very good drama about the impact of war from a boy’s perspective, but without getting cloying or manipulative (like the recent War Horse).  Bale does a good job in his first major role, as does Malkovich in support.  If you have never seen it, then I highly recommend this film.

Note: the video below contains clips of Christian Bale in Empire of the Sun.  There are no real spoilers for the film in it.  In fact, it is not a single scene, or even a sequential set of scenes, but rather a bunch of unconnected short clips of Bale from the film not shown in any particular order.  You get to see what he looked like both before and during his imprisonment.