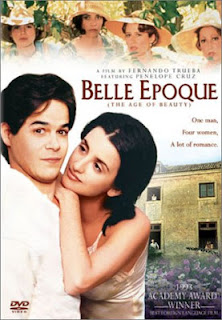 Belle Epoque is one of the few comedies to ever receive an Oscar in any of the Best Picture categories.  In this case it was the 1993 Best Foreign Language Film winner.  It also won nine Goyas (the “Spanish Oscar”), including Best Picture, in its own country.  It is the first film in which I ever saw Penelope Cruz.  She was about 18 when it was shot.  It’s also the first time I ever saw Maribel Verdu and Ariadna Gil, too, but they are not as well known in the U.S. despite the fact that both were in Pan’s Labyrinth (2006) – Verdu as the housekeeper and Gil as the mother.

The comedy in Belle Epoque is not the pie in your face kind, but more the witty and/or subversive kind.  For example there is a scene where some men are playing cards in a brothel.  Suddenly two men run in with an urgent message.  We only then find out that one of the men playing cards is the priest in town and when he gets up to respond to the message another man stands up and says that since he is the Mayor he’d better go see what is wrong, too.  One of the men who ran in is shocked to find the priest there, but the Father explains that he needs to go wherever there is sin in order to better combat it.

The film takes place in in 1931 – a period of unrest between people trying to maintain the monarchy and those who are trying to create a republic.  A young man named Fernando (Jorge Sanz – Amantes) has deserted his military assignment.  He’s only a bugle player and doesn’t have any convictions strong enough to die for.  Fernando meets up with an older man named Manolo (Fernando Fernan Gomez – The Spirit of the Beehive, All About My Mother) who lets him stay at his home.

The two get along well, Fernando cooking and Manolo feeling a little like he’s found the son he never had.  All good things must come to an end, though.  Manolo’s four daughters are coming to stay with him for a while because the area where they live is too dangerous.  Manolo feels he can’t have Fernando living in his home with them, so Fernando agrees to move on.  They go to the train station, Fernando to leave on one and Manolo to meet his daughters on another.  As luck would have it, the daughters’ train arrives first.

Fernando watches wide eyed as they get off the train and greet their father.  Each one is more beautiful than the one before.  First comes the oldest, Clara (Miriam Diaz-Aroca – High Heels), then Violetta (Ariadna Gil – Pan’s Labyrinth), then Rocio (Maribel Verdu – Y Tu Mama Tambien, Pan’s Labyrinth), then finally the youngest, Luz (Penelope Cruz), in pigtails.

The title of the film translates as “The Age of Beauty”, so it is aptly named.  The only other four movie sisters that I can think of to rival the ones in Belle Epoque are those in 2005’s The Upside of Anger – Keri Russell, Alicia Witt, Erika Christensen, and Evan Rachel Wood.  Even then I don’t think they have the sex appeal of the four Spanish actresses.

After witnessing all of this, Fernando decides that maybe, just maybe, he might stick around a little longer.  He “misses his train” and goes back to Manolo’s house to just spend the night until he can catch the next day’s train.  Between his handsomeness and his cooking, he immediately meets with the approval of all four sisters.  Rocio goes so far as to make a move on him that night when she is upstairs making his bed up for him.  They get interrupted, though.

You might think that Fernando is some kind of lothario who is going to use one or more of these women before moving on.  He might even be thinking that himself.  A good deal of humor comes from the fact that if anyone ends up getting used it’s Fernando.

Rocio catches him later, hugs him, then uses the opportunity to fall onto a bed behind her while not letting go of him.  She then starts exclaiming about what a devil he is making her do this, all while she is kissing him.  He is very confused about whether she wants him to have sex with her or not.

Will Rocio be the one to get him?  Luz develops a crush on Fernando and it bothers her when he moons over her older sisters.  She loses the pigtails pretty quickly.  Clara is a young widow, knows what it is like to share a bed with a man, and now has gone without a man for several months.  Violetta would seem to be the one most immune to Fernando’s charms.  She wears trousers, smokes cigarettes, hunts, fixes a vacuum cleaner, chops wood, etc.  The other sisters explain that their mother wanted a son, so she dressed Violetta as a boy all the years she was growing up.

So, Violetta’s off the table, right?  Right?  Actually, no.  Take a little bit of Some Like It Hot cross-dressing for a costumed festival, a little bit of wine, a funny tango with a very confused Fernando-in-drag, and Violetta decides Fernando makes a fine looking woman.  Their sex scene is quite funny for his reactions.  On the one hand he really wants to have sex with Violetta, but on the other hand the entire situation is freaking him out.

He’s not a cad, though.  The next morning he decides he is in love and tells Manolo about this and that he wants to marry his daughter.  Manolo is stunned.  Unfortunately, Fernando forgot to check with Violetta to see if she felt the same way.  Needless to say, Fernando finds that the path to love is not as easy as he thought it was.

In addition to this main story, there are subplots with a rich man in town who wants to marry Rocio even though his overbearing mother would prefer he stay home, with the aforementioned priest who doesn’t seem to be that devout, and with the ongoing fight over monarchy vs. republic.

All of the performers do quite well.  Cruz stands out, even among the other actresses playing her sisters.  So does Verdu, whose naughty looks Fernando’s way speak volumes about what she’d like to do to him, if no one would find out.  In addition to the female beauty on screen, the countryside that the movie was filmed in is also quite beautiful, as befits the title.

If all of this sounds interesting, and if you would like to see early performances from Penelope Cruz, Maribel Verdu, and Ariadna Gil, then I recommend you give this film a try.

Note: the videos below are specific points in the movie.  The first is when the sisters get off the train, including Penelope Cruz in pigtails.  The second is when Cruz’s character has lost her pigtails.  Because this is the entire movie, each will continue to play all the way to the end unless you pause it.  For the second video, stop watching before 1:38:15 to avoid a spoiler.