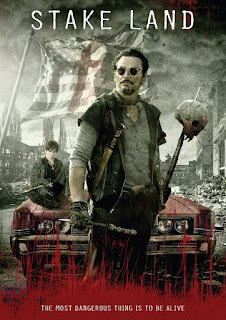 This is the fourth for this year and 16th overall review of a film that Steve Honeywell at 1001plus gave me to see.  He is doing the same with films from me.  This month’s selection is Stake Land, one of the two horror movies Steve gave me this year.  I didn’t know if my health situation was going to allow me to get this done on time.  I was in pain while watching it and I freely admit this may have negatively impacted my impression of it.  Overall, I can see why Steve picked it for me – being a “not your usual” vampire movie – and while there are some good points to it, the film ultimately comes in at an “it was okay” level with me.


The basic premise is that we are in a post-apocalyptic United States where vampires have taken over.  These aren’t your Twilight vampires, though, nor even your Dracula kind – these are slavering, mindless animals whose only concern is blood.

Star and co-writer (with Director Jim Mickle) Nick Damici plays a man known only as Mister.  In the opening of the film he saves a teenage boy named Martin (Connor Paolo) when a vampire kills the rest of Connor’s family.  In the best traditions of most any western, Mister takes Connor under his wing and starts training him how to fight and kill vampires.

They travel north by car, occasionally coming across protected small towns still populated by humans.  They also run into religious nutcases who have convinced themselves that the vampires are God’s way of getting rid of the wicked.  And since anyone who disagrees with the nutsos is therefore by definition wicked, they take it upon themselves to gather up vampires then release them onto the other humans that have survived.

As the film goes along Mister and Connor pick up a few more people to travel with them.  They also have to keep dealing with the nutsos.  As with most any post-apocalyptic road movie (including the most recent Mad Max movie) there’s a near-mythical location where everything is wonderful.  All you have to do is get there.  For Stake Land it’s called New Eden and it’s in Canada.

I mentioned there are different kinds of vampires in this and the movie as a whole is a different kind of vampire movie.  Many films would have turned it into an extended training montage, with Connor taking on more and more powerful opponents, all the while with Mister watching with proud eyes.  And of course, it would have built to Connor’s biggest showdown – whatever that would have been.  That’s not this movie.

We don’t just get all five travelers at once, do quick intros to all of them, then spend the rest of the movie wondering who’s going to die first.  We meet them gradually and organically.  We learn about them in more depth.  We care about them more.  So when one of them does die (not a spoiler – this is a horror movie; you think everyone lives happily ever after?) we feel the impact more.

Second – the not so good:

One of the things from the good also appears here – the approach to the film.  By not focusing on the “usual stuff” the movie instead takes its time with philosophical musings (usually in voice over), with showing the drive itself, the road, the countryside, the downtrodden people, etc.  Unfortunately, they overdid this.  The result is a film, that even though it is only 1 hour and 38 minutes long, feels much longer.  This is normally where I’d say something like “10-15 minutes could have been cut out”, but in thinking back I’m not really sure there are that many repetitive scenes.  It’s just the way they are presented.

As the film was winding down I was mulling giving this a recommended rating, but then it did three small things in short succession (which I will not spoil) that bugged me.  They all felt out of sync with the entire rest of the movie and that’s what pushed me to an it’s okay rating.

I just want to comment on the casting.  When the movie opened and Mister first appeared on the screen I wondered for a couple seconds if it was Val Kilmer in the role.  I decided it wasn’t and moved on.  Later, a nun appears and I thought to myself, “She looks a little like Kelly McGillis”, but I dismissed it.  It turns out that was her.  And in the latter half when a pregnant young woman appears I did recognize her face, but not her name.  She was played by former child actress Danielle Harris.  And here was the weird part – I recognized her because she looked so much like she did when she played the foul-mouthed daughter of Bruce Willis’ character in The Last Boy Scout – a movie made 20 years before Stake Land.  I would have sworn she might have aged 6-8 years since then.  In fact, when she first appeared onscreen she looked to be a contemporary age with the teenage Connor – maybe a couple years older.  After doing some math I knew something had to be wrong and I paused the movie to look up her IMDB page.  Guess what?  She was 33 when she made Stake Land.  Unbelievable.

Back to the film; overall this is a better than average horror film in that it avoids a lot of genre clichés, but at the same time it’s also not the most engaging movie to watch, either.  I don’t feel I wasted my time watching it, and I didn’t dislike it.  I just didn’t end up liking it quite enough to recommend it.  Sorry Steve.