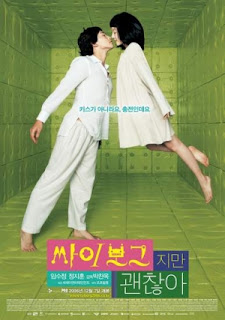 We have come to the last of twelve movie selections Steve Honeywell at 1001plus has made for me for 2015.  This one is I’m a Cyborg, But That’s Okay, a South Korean film that is decidedly different.  When Steve finalized his list this was one selection I had never heard of, but the title alone amused me so going in I was predisposed to like it.  I have to admit that I was undecided on it while watching until it had, of all things to encounter in a Korean film, a yodeling section that was simultaneously funny and touching.  (Don’t worry, it makes sense in the context of the film – well, as much sense as anything else.)  I ended up liking this movie, although the ending was a letdown until I read up on it afterwards (more on that below).


A woman named Young-goon (Su-jeong Lim) works assembling radios, but hears instructions telling her to first slice her wrist then attach a wire and plug it into a socket.  Her suicide attempt lands her in a mental ward.  It turns out there’s a history of mental illness in the family with her grandmother thinking she was a mouse and eating only radishes until she was also taken away.  This traumatized Young-goon and she has spent the rest of her life to this point wondering how to get her grandmother back, and worried because her grandmother didn’t take her false teeth with her, a possession Young-goon still has and that she holds more dear than anything else.

For at least half the running time the film then becomes an ensemble piece and we meet several of the mental patients and a couple of doctors.  We get to see the world through their eyes, whether it’s a woman who will only look at others through a handheld mirror or a man who walks backwards so as to not offend others by showing them his back.

Young-goon’s illness is that she thinks she’s a cyborg.  She’s actually thought that for years, but when she confessed it to her mother she was told to keep it to herself.  The mother was afraid that what had happened to her own mother (Young-goon’s grandmother) was now manifesting itself in her daughter Young-goon.  Consequently, Young-goon does not tell the doctors of this.  They do notice that she doesn’t eat, which is a result of her illness – she thinks food will foul up her insides since she’s a cyborg. Instead, she spends her time licking batteries to try to charge herself.

Also in the facility is a man named Park Il-sun (Korean pop star Rain).  He wears masks all the time and is a kleptomaniac, although often what he “steals” is insubstantial because he uses the particular delusions of each patient to convince them that he has taken away from them something related to that illness.  This is an early sign that he understands the others far better than the doctors do.

Young-goon is fascinated by him and he eventually is taken by her, too.  All the time the doctors are trying to get Young-goon to eat by trying to get her to be rational, he has come to understand her delusion and works with it to try to do something none of the doctors has been able to do – get Young-goon to eat.  If she doesn’t eat soon, she will die.  One problem if she gets better, though, is she thinks it’s her cyborg mission to get revenge on all the “white ‘uns” (doctors and nurses) because they’re also the ones who took her grandmother away.

This is the largest section of interaction between the two main characters and they take over the film for the last major section of it.  Without spoiling anything I will say that the resolution to the eating comes at least 15 minutes before the end of the movie and after that it felt like it just sort of petered out.  The last two scenes of the film are ones where I did not see something onscreen that were very subtle clues as to what the director was saying.  I watched this on a computer screen and apparently it simply wasn’t big enough to see the two things that are keys to the ending.  I guess this is an endorsement for seeing the film on a big movie screen in the theater.

However, if an ending is so obscure or subtle as to require having to read up on it afterwards then that is a failure on the director’s part, not the viewer’s.  I’ve seen several thousand films, I know to watch for clues, and I was paying full attention to it while watching, yet I still did not see these two things that are absolutely critical to understanding the ending.  I read one comment on IMDB that a person had finally noticed ONE of these two things on their seventh viewing of the film.

So, we’ve got an off kilter sort of love story that takes place in a mental ward with a woman who thinks she’s a cyborg out to kill the doctors and nurses.  It has a number of interesting scenes that we see as the mental patients perceive things.  But it does have an ending that harms the movie some.  Overall I liked this – I just wish the ending was more apparent on a smaller screen.  If this sounds like an interesting film then I recommend you give it a try.