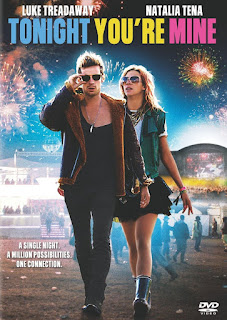 Adam (Luke Treadaway) is the singer/songwriter/lead guitarist for the (fictional) duo The Make.  Along with keyboardist Tyko (Mathew Baynton) the two of them are very successful and popular.  They are going to be one of the headlining acts at the festival. When they arrive they immediately incur the wrath of The Dirty Pinks – an up and coming (also fictional) four woman punk band led by Morello (Natalia Tena).  Tena is probably best known for playing Nymphadora Tonks in multiple Harry Potter movies, but she also plays Osha, the wildling woman at Winterfell in Game of Thrones.

Morello doesn’t like Adam’s superior attitude and lets him know it.  He doesn’t like her angry attitude.  The two start to bicker, then fight.  A self-appointed peacekeeper shows up and suggests they all pray together.  He uses this as a diversion to quickly handcuff Adam and Morello together.  He suggests they learn to get along with each other and he’ll be back sometime with the key.  He quickly disappears leaving the two of them staring at each other with disdain and “now look what you got me into” expressions on their faces.

Anyone over the age of eight who has seen a few movies will be able to tell where this is going to go.  This isn’t the kind of film you watch to be surprised by the ending; it’s one you watch for the enjoyment along the way.  A key to that enjoyment is chemistry between the leads and thankfully they have it in spades.

Another bonus from the casting is that both of them have music experience, including Tena being part of a successful band in real life.  She and Treadaway even wrote two of the songs that get performed during the film.  Just fyi – this isn’t a musical where people burst into coordinated song and dance; it’s a film where some songs get performed in it by musicians.

Being handcuffed to another person you knew and liked would be hard enough.  Now toss in the fact that they are virtual strangers, they dislike each other, they are on the grounds of a musical festival with rain, mud, etc., they have times when their bands are scheduled to perform, and let’s not forget bathroom breaks and sleeping arrangements, and things get really unhappy for them.  The best scene in the film is when Morello is on stage with her band playing one of their songs and Adam starts messing with the keyboard she is playing, hitting some keys of his own.  It leads to a really fun scene.

Adam and Morello are not in a vacuum of course.  Her bandmates hate him right along with her, so the fact that he has to be wherever she is (which is often with them) does not make them happy.  Adam’s manager is worried about what this will do to Adam’s image.  And what about “significant others”?  Adam is (of course) dating a supermodel – more evidence of him being a douche as far as Morello is concerned.  And she is dating a guy who she obviously does not have anywhere near the chemistry with that she has with Adam.  Neither of those people are happy about Adam and Morello being handcuffed together, either.

I mentioned the “you are there” aspect.  They really shot while the festival was going on around them.  They have 85,000 extras that may have appeared in the movie at some point.  They had to do scenes regardless of conditions.  There is a near-constant thread of music in the background from the real stage acts – many of them names/songs you will recognize.  And they had to react to the real people in the area.  Reportedly, Adam’s manager was named Stan, but so many people called him Bobby that they had to change the name because they couldn’t replace the dialogue.  They edited the raw footage every night because they had to know if they didn’t get a scene so they could shoot it the next day.  They had a very limited time in which to shoot an entire film.  In fact, everyone camped right there on the grounds with the real concert-goers.

This roughness does show through in the final product.  Some people have criticized the film for that, but it’s part of what makes it better for me.  And let’s face facts, critics hate most every movie where a man and woman meet cute and end up happy with each other, anyway.  Even if this had the prettiest cinematography in the world they were still going to hate it.  I’ve read a few comments from critics that seemed to reluctantly admit that even though they felt they should criticize the movie more it did leave them smiling afterwards.

In fact, if you share that hate with critics then I’d suggest you stay away from this movie.  It will probably only irritate you.  On the other hand, if you like music, like leads with great chemistry, and would like to see what it feels like to attend this music festival then I highly recommend you watch this movie.