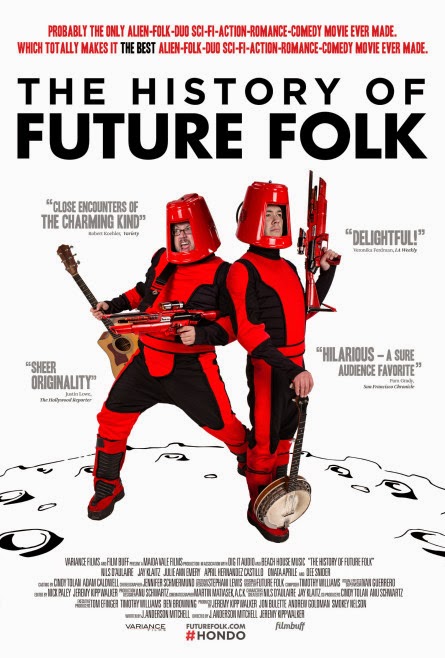 Watching movies nowadays it sometimes feels like low budget filmmakers have forgotten what the primary point of a movie is – to entertain.  (A studio exec would say it’s to make money, but the best way to make money is to make an entertaining movie that people want to see over and over.)  The days of Robert Rodriguez making El Mariachi (1992) for $7,000 and Kevin Smith making Clerks (1994) for $23,000 are long behind us.  Instead, it seems today’s filmmakers feel that to make up for the lack of budget they have to make their movie “artistic”, which is a polite euphemism for “a film only their mother and some professional film critics could love.”  Then just when it seems like all is lost along comes a film like The History of Future Folk to rekindle hope.  I had a smile on my face for most of the movie, either from the humor, or just from the sheer fun of watching it.


It is a low budget film and it knows it.  Instead of trying to hide it, it actually makes it a positive.  One example is the space outfits worn by the two lead characters.  They basically consist of red overalls and a plastic bucket on their heads for helmets.  But they are really good looking helmets when compared to the homemade outfits their growing numbers of fans start to make in their own homes.  The movie is saying, “Yeah, we know these aren’t space outfits like you’d see in Star Wars, but hey, at least we made the best ones we could afford because look how bad they could have been.”

The film opens with Bill Hunt (Nils d’Aulaire) telling his young daughter Wren (Onata Aprile) a bedtime story about the planet Hondo that is threatened by a comet that is going to strike it.  The planet sends General Trius out to find a new planet for the Hondonians.  But when General Trius gets to Earth and is about to set off a device to exterminate all humans, he hears music for the first time.  He so falls in love with music that he decides that the humans who invented it can’t be wiped out.  He lets them live in peace and decides to stay among them.

The daughter is completely caught up in this, to the point that the mom Holly (Julie Ann Emery) comes in and makes him put Wren to bed.  Of course, even though Holly and Wren don’t know it, the whole bedtime story is true and is Bill’s backstory.  He spends his nights playing banjo onstage in a small club in his space outfit.  His “stage name” is his real one – General Trius.  By the way, former Twisted Sister frontman Dee Snider has a supporting role as the owner of the club.

One day another Hondonian (Jay Klaitz) arrives and tries to assassinate Bill as a traitor for not going through with his mission.  He fails miserably and Bill captures him.  Bill tries to hide him in his shed, but Wren finds him there.  The police get called, but Bill manages to defuse the situation by saying that this other man is a friend from out of town who dressed like Bill to support him on stage, but then got drunk and out of control.  Wren is having none of this.  She just looks at the second man, smiles, and gives the traditional Hondonian greeting from her bedtime story, “Hondo”.

As luck would have it, the would-be assassin escapes, but not before Bill has played music for him.  This has the same effect as it did on Bill and the next night when Bill goes on stage, the second man, who we find out is named Kevin, joins him with a guitar.  General Trius and The Mighty Kevin become a hit with the patrons and name themselves Future Folk.

Meanwhile, General Trius knows that the inept Kevin was sent to try to make him overconfident, and that a real assassin must be on the way.  To make matters worse, Kevin has developed a serious crush on the policewoman Carmen (April L. Hernandez) that first came to Bill’s house.  He kisses her, gets both he and Bill arrested, and this opens up a can of worms when Carmen discovers Bill’s entire identity is fake.  This estranges Bill from his wife Holly, and puts Bill and Kevin on the run after they escape from jail.  Bill has had a plan in the works for destroying the comet that threatens Hondo, but he needs time.  This means avoiding both the police and the alien assassin.  That might be easier to do if Future Folk wasn't becoming so popular at the club they are playing at every night.

The best joke in the film for me is a scene where Kevin (of course) stuns and briefly kidnaps Carmen.  As she lies there in stunned (literally) disbelief he starts innocently singing her a love song he has written for her.  You quickly realize he is singing to her in Spanish because, of course an alien would instantly learn Spanish along with English.  Kevin and Carmen’s tale of star-crossed (literally) lovers isn’t done; there’s a later scene in a tango class.  You can probably figure where that’s going.  And did I mention that Kevin and Bill are still on the run from the police, including Carmen?

I had never heard of the musical act Future Folk before seeing this film.  Apparently d’Aulaire and Klaitz are this duo and have been playing the area for the better part of a decade.  They have been building their backstory as aliens and this film is based on those stories.  The songs that they perform in the film are ones that they perform in real life as part of their stage act.

d’Aulaire shows off some skills when he plays a series of musical excerpts for Kevin.  I have to say that I never thought I’d hear a medley of music that includes Fur Elise (Beethoven), Eine Kleine Nachtmuzik (Mozart), The Four Seasons (Vivaldi), The Entertainer (Joplin), Hello My Baby, the Mario Brothers theme, and others – all played on the banjo.

As actors d’Aulaire does quite a good job.  And in regards to casting I would have sworn that Onata Aprile, who played his character’s daughter Wren, had to be his daughter in real life.  Klaitz plays the broader, more comic role of Kevin and there are times when he goes over the top, most noticeably when reacting to the banjo medley I mentioned above.  I’m guessing the two are also playing to their stage personas with d’Aulaire being more serious and Klaitz being more comical.

Overall, I had a fun time watching this movie.  It’s humorous without being a spoof or parody.  It’s serious without getting all depressing or weepy.  It’s romantic, but with tongue firmly planted in cheek.  And it’s got a great father/mother/daughter relationship in it.  It deserves a far wider audience and the fact that it’s streaming on Netflix may make that happen.  I’m glad Steve at 1001plus put it on the list of films for me to watch.  Unless you simply hate anything to do with fun, I highly recommend this film.